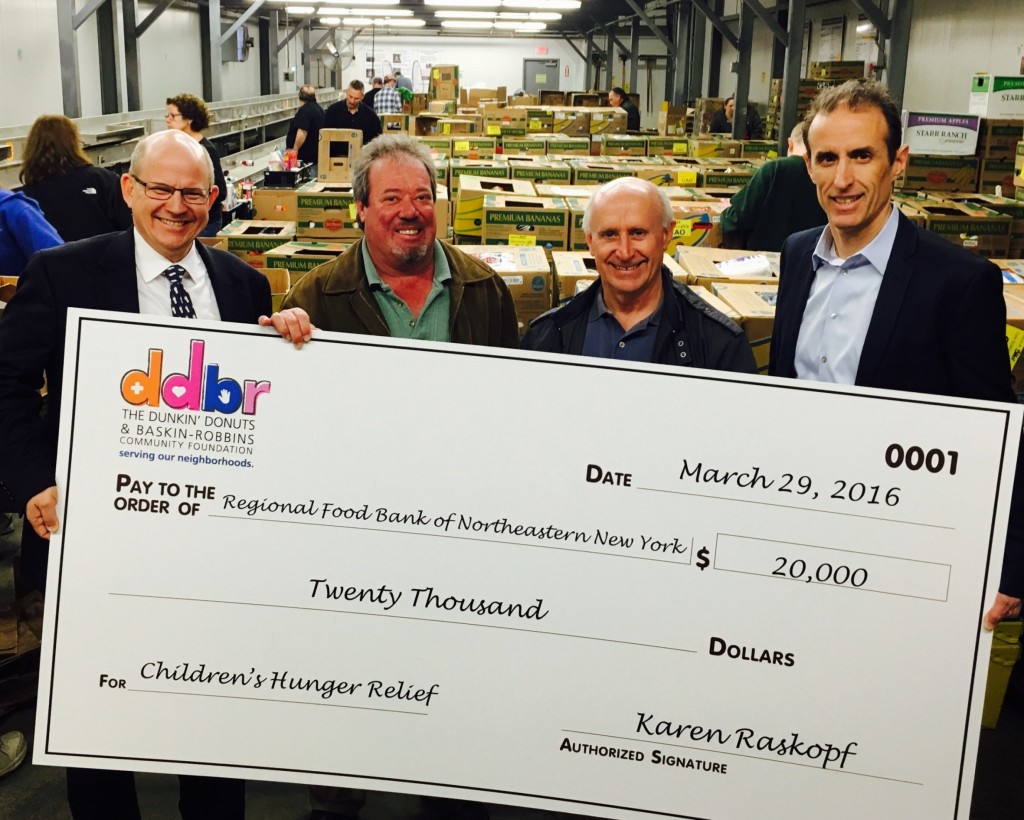 LATHAM, NY; March 29, 2016 – The Regional Food Bank of Northeastern New York today announced it has received a $20,000 grant from The Dunkin’ Donuts & Baskin-Robbins Community Foundation (DDBRCF).  In the final year of its three-year, $1,000,000 commitment, The DDBRCF is working closely with Feeding America® member food banks to support child-hunger initiatives nationwide.

The Backpack Program provides children in need with nutritious and easy-to-prepare food to take home on weekends and school vacations when other resources are not available. The $20,000 DDBRCF grant will provide an additional 19,000 meals to children in 118 schools.

“The Regional Food Bank of Northeastern New York’s child feeding programs are critical to supporting local children who are struggling with hunger,” said Regional Food Bank of Northeastern New York Executive Director Mark Quandt.  “With support from The Dunkin Donuts & Baskin-Robbins Community Foundation, we can ensure that more kids have access to the food needed to learn and thrive.”

“We are delighted to continue to support Feeding America in its efforts to help alleviate child-hunger in our country,” said Dunkin’ Brands Chief Communications Officer and Co-Chair of The Dunkin’ Donuts & Baskin-Robbins Community Foundation, Karen Raskopf. “This million-dollar, three-year grant was the largest in our Foundation’s history. Dunkin’ Donuts and Baskin-Robbins and our franchisees are committed to continuing to raise funds so we can help take care of even more of those in need in our communities.”

The DDBRCF has been a national Feeding America partner since 2007 and, in addition to this large grant, has donated more than $1,000,000 to support the Feeding America network.  Over the past nine years, The DDBRCF has addressed the issue of hunger relief through both national and local efforts.  Dunkin’ Donuts and Baskin-Robbins franchisees have held fundraisers to support local food banks, led food drives in the communities they serve and organized volunteer days at their local food banks to help fill backpacks with nutritious meals for children.  Last year, nearly 1,600 franchisees and employees came together at 70 Feeding America member food banks nationwide for The DDBRCF second annual National Week of Service.  To learn more about the Dunkin’ Donuts & Baskin-Robbins Community Foundation, please visit www.dunkinbrands.com/foundation or follow us on Facebook www.facebook.com/DDBRCF.

About the Regional Food Bank of Northeastern New York: The Regional Food Bank is a 501(c) (3) not-for-profit organization that collects donated food from the food industry and distributes it to 1,000 charitable agencies feeding the hungry in 23 counties of northeastern New York. The food provided by the food bank helps to feed more than 40,000 people each week. In 2015, the organization distributed 34 million pounds of food to the hungry.

About The Dunkin’ Donuts & Baskin-Robbins Community Foundation: The mission of The Dunkin’ Donuts & Baskin-Robbins Community Foundation is to serve its neighborhoods by taking care of their basic needs: hunger, children’s health and safety. The DDBRCF brings together a wide network of stakeholders, including franchisees, crew members and employees to serve their local communities. Launched in 2006, The DDBRCF has granted more than $11,000,000 to local charities.