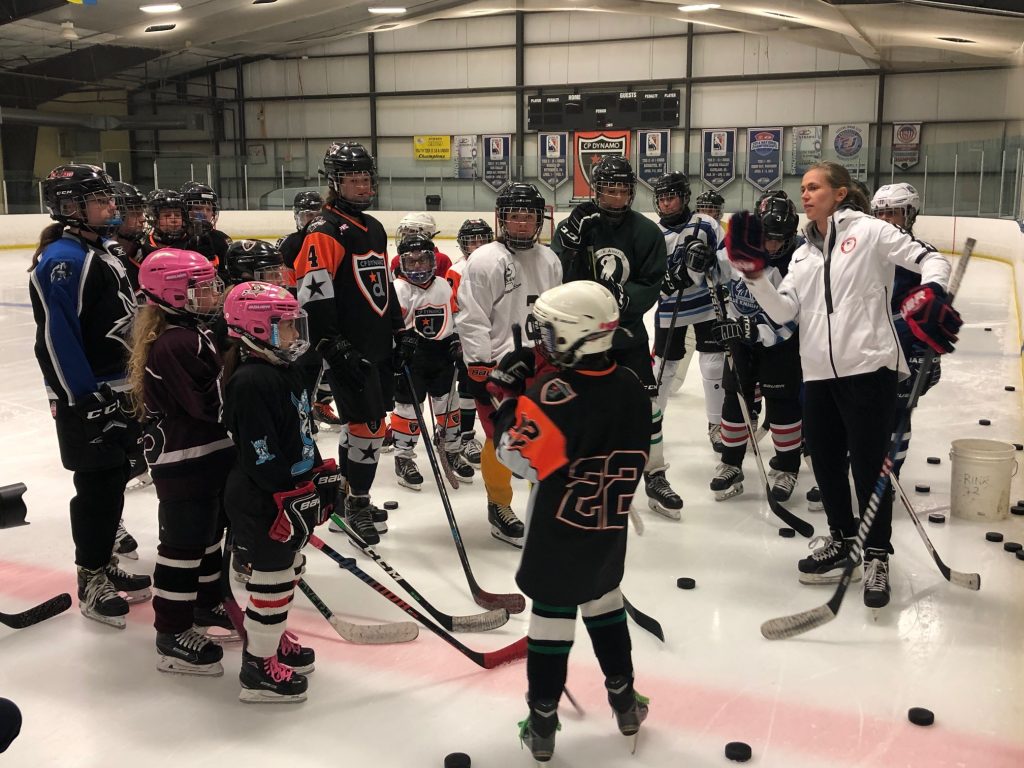 Special visit comes in advance of the Aurora Games, the inaugural all-women’s sports and entertainment festival in Albany, NY, August 20-25, 2019

ALBANY, N.Y.;  – Olympic Gold Medalist and National Women’s Hockey League (NWHL) All-Star Haley Skarupa hosted a clinic for members of Clifton Park-based CP Dynamo girls’ ice hockey and other leagues from throughout the Capital Region on Thursday, April 25 in Clifton Park, NY. Skarupa, who will be participating in the Aurora Games later this summer, was a member of the 2018 United States Women’s Olympic hockey team which captured the gold medal at the PyeongChang Games.

Skarupa’s appearance in the Capital Region is tied to the Aurora Games, the inaugural all-women’s sports and entertainment festival, which will be held at the Times Union Center in Albany, NY on August 20-25, 2019. Skarupa will represent Team Americas in the ice hockey competition.

“Any time that you can come together with some of the best players in the world is extremely fun. And to be able to not only be there for this event but to compete in it is very special to me,” said Skarupa. “A few years down the road we’ll be able to look back and say we were part of the growth of women’s sports. It’s an honor.”

More than 175 professional, world-class athletes are expected to compete under the banners of Team Americas and Team World in the Aurora Games. The six-day festival will feature ice hockey, gymnastics, figure skating, basketball and beach volleyball, as well as a world-class exhibition in table tennis.

In addition to Skarupa, the following women’s hockey stars have committed to participate in the Aurora Games:

Additionally, the following stars who have committed to play for Team World in the Aurora Games participated in the Women’s World Ice Hockey Championship earlier this month, including the players from Finland who finished second in the tournament:

Individual session tickets for the Aurora Games are on-sale now at Ticketmaster.com. Tickets range in price from $15 to $129 and include admission to the Aurora Games FanZone. Children may qualify for half-price tickets.

Fans may save $5 on select Aurora Games tickets with a voucher available at more than 150 participating Stewart’s Shops locations in Albany, Rensselaer, Saratoga, Schenectady and Warren counties. The voucher is redeemable for individual session tickets at the $15, $25 and $35 level. Vouchers will be available through April 28 or while supplies last. Vouchers must be redeemed at the Times Union Center Box Office, pending ticket availability. Limit one voucher per guest; cannot be combined with other offers.

Fans are welcome to attend the Aurora Games FanZone at the Albany Capital Center, featuring music, athlete meet and greets, food and entertainment, and a table tennis exhibition. Fans may purchase tickets exclusively to the FanZone for $10 at Ticketmaster.com. A limited number of reserved seats for the table tennis exhibition on August 24 and 25 are available for purchase.

The FanZone will also feature “Conversations with Champions,” a series of workshops led by world-class female champions and empowerment role models. Judge Rosemarie Aquilina, who presided over the sentencing of former USA Gymnastics team doctor Larry Nassar, will serve as the keynote speaker on Wednesday, August 25 at 5 p.m. A separate admission is required for “Conversations with Champions” and tickets may be purchased at Ticketmaster.com. The full schedule of workshops is available at AuroraGamesFestival.com.