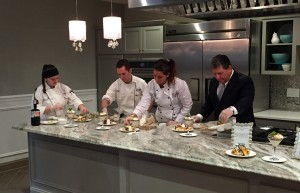 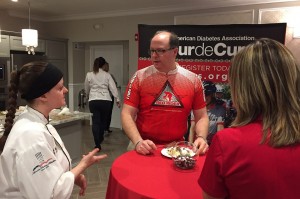 Clifton Park, N.Y., – Mazzone Hospitality today announced it will donate proceeds from two low-sugar desserts offered in each of its restaurants to the American Diabetes Association (ADA) 2015 Saratoga Springs Tour de Cure – the premier cycling event in the Capital Region dedicated to finding a cure for diabetes.

The desserts were created by Vivian Brammer, pastry chef at Prime at Saratoga National, and feature lower sugar content, making them ideal for diners with diabetes. Both desserts cost $10 and will be available through Sunday, June 7, 2015, the day of the ride, at all Mazzone Hospitality restaurants.

“We are honored to support the efforts of the American Diabetes Association as they combat this disease that affects so many families throughout the nation,” said Angelo Mazzone, owner of Mazzone Hospitality. “The Tour de Cure is a fun and healthy way to raise money and awareness of diabetes and I’m proud that we can help this wonderful organization work toward a cure. I plan to be riding again on June 7 with the Mazzone Hospitality team.”

“Angelo and Mazzone Hospitality have been tremendous partners in our fight against diabetes and the deadly consequences of the disease,” said Denise Nicastro, event manager of the Saratoga Springs Tour de Cure. “This event today serves as a great launching point for our efforts and we couldn’t be more excited for the Tour de Cure in 2015. We are truly thankful for all of our riders, volunteers and community partners and hope to surpass last year’s fundraising effort with their help.”

Ranked first in the state and second out of 85 Tours nationwide, the Saratoga Springs Tour de Cure attracts more than 2,500 riders and includes routes ranging from a 10-mile Family Fun Ride to a 100-mile Century Ride. The 2015 event will be held Sunday, June 7 at Saratoga Springs High School. The registration fee ranges from $15 for early bird to $25 for day-of registration with a $200 fundraising minimum.

Mazzone Hospitality owns and operates several of the Capital Region’s premier restaurants and banquet halls including: Glen Sanders Mansion in Scotia featuring Angelo’s Tavolo, two ballrooms and an inn; Aperitivo Bistro, a dynamic wine bar and bistro adjacent to Proctors in Schenectady; Angelo’s Prime Bar + Grill, a casual and modern bar and grill in Clifton Park; TALA, An American Bistro, featuring an eclectic mix of stylized entrees and a spa menu; and Angelo’s 677 Prime, an upscale steakhouse and wine bar in the heart of the theater district in Albany. Mazzone Hospitality also owns and operates Prime at Saratoga National, an upscale steakhouse modeled after Angelo’s 677 Prime, located on the grounds of Saratoga National Golf Club. Through its PRIME Business Dining division the company oversees corporate dining operations for M+W Group at The Foundry; GLOBALFOUNDRIES; PRIME @ 107; Ayco Café; Golub Headquarters; and the SI Group. The company operates and manages the historic Parker Inn & Suites in downtown Schenectady and also oversees the catering operations at the Hall of Springs, Key Hall at Proctors, and caters private weddings, fundraisers, and corporate or social events. For more information about Mazzone Hospitality, call 518-374-7262 or visit www.mazzonehospitality.com.

About the American Diabetes Association

The American Diabetes Association (ADA) is the nation’s leading nonprofit health organization whose mission is to prevent and cure diabetes and to improve the lives of all people affected by the disease. Founded in 1940, the Association serves the community by funding research to prevent, cure and manage diabetes, providing credible information about the disease, giving voice to those denied their rights because of diabetes, and delivering services to people with diabetes, their families and health care professionals. For more information, please call the American Diabetes Association at 1-800-DIABETES (1-800-342-2383) or visit www.diabetes.org.