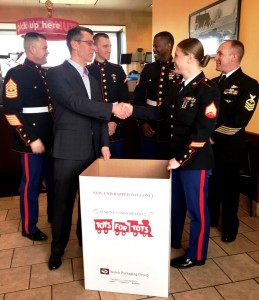 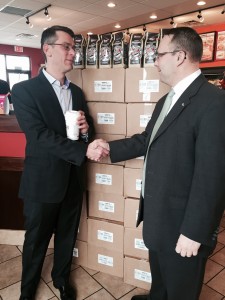 Dunkin’ Donuts will contribute one dollar to Buffalo Toys for Tots for every new, unwrapped toy donated at participating Buffalo-area Dunkin’ Donuts restaurants through December 15 (up to $3,000).

The donation from Dunkin’ Donuts will go toward the purchase of additional toys to be distributed by the Marine Corps Reserve to children and families in need in Erie, Niagara, Genesee, Wyoming and West Cattaraugus counties during the 2014 holiday season.

“The Red Cross is grateful to Dunkin’ Donuts for their ongoing partnership and for this recent donation to help those who have been impacted by disasters such as the recent snowstorm,” said Chuck Marra, Executive Director of the American Red Cross, Western New York Chapter. “This generosity is reflective of Dunkin’ Donuts’ commitment to the communities they serve, and we are appreciative of their ongoing dedication to our lifesaving mission.”

Dunkin’ Donuts has 48 restaurants in the Buffalo market, and has forged a successful partnership with the American Red Cross over the past seven years through the ‘Give a Pint, Get a Pound’ campaign, which has helped increase blood donations by providing a coupon for a free pound of Dunkin’ Donuts coffee to all presenting donors at Red Cross blood drives during the month of January.

Dunkin’ Donuts announced its partnership with the Marine Corps Reserve for the 2014 Toys for Tots drive and the donation to the American Red Cross after concluding a campaign with an organization that provides support for local veterans. During Tuesday’s event at its restaurant, 2340 Delaware Avenue, Dunkin’ Donuts presented 500 pounds of coffee to the Veterans One-stop Center of Western New York. Dunkin’ Donuts had pledged to donate one pound of coffee (up to 500 pounds) to the Veterans One-stop Center of Western New York for every pound of coffee or K-Cup pack purchased on Veterans Day at participating Dunkin’ Donuts locations in the greater Buffalo area.

“Dunkin’ Donuts is proud to partner with both our active-duty and retired servicemen and servicewomen from the greater Buffalo area who are true community heroes,” said Tammy Monks, senior field marketing manager for Dunkin’ Donuts. “We are grateful for the work of the Marine volunteers who bring so much joy to local children through Toys for Tots. I encourage residents of the greater Buffalo area to donate a new, unwrapped toy at one of our restaurants to help us support a program that is so important this holiday season.”