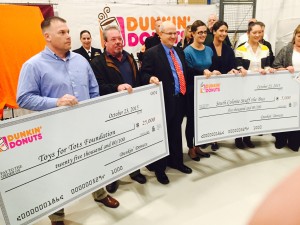 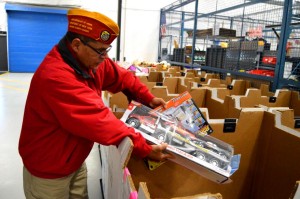 Dunkin’ Donuts’ donation of $30,000 brings seven-year total in support of Toys for Tots to $200,000 IntegraOptics to return as regional headquarters for Toys for Tots campaign

Dunkin’ Donuts’ contribution includes funding toward the purchase of new winter coats to keep children warm this season. The coats, which will be distributed throughout New York, will be collected and administered through the South Colonie Central School District.

This year’s Toys for Tots collection drive will take place at more than 400 locations throughout the Capital Region, including more than 100 Dunkin’ Donuts restaurants, which will serve as drop-off points for guests wishing to donate new, unwrapped toys.

Friday’s announcement was made at the Albany headquarters of IntegraOptics, which will serve as the home of the Capital Region Toys for Tots program for the third consecutive year. In addition to donating warehouse space, IntegraOptics will also contribute $40,000 to this year’s campaign.

“We’re fortunate to have a dedicated community partner in Dunkin’ Donuts and are grateful for the support its franchisees have provided to keep our holiday initiative running for the seventh year in a row,” said Marine Gunnery Sgt. (Ret.) Albert Roman, local coordinator of the Albany Toys for Tots campaign. “We’d also like to thank Canadian Pacific for transporting and delivering tens of thousands of toys to communities in upstate New York the past 15 years. We are grateful to Norfolk Southern and Amtrak for continuing this spirit of giving by assuming the mantle from Canadian Pacific. Their generosity, along with that of Dunkin’ Donuts, IntegraOptics and numerous other local companies and organizations, will bring new toys to thousands of children in New York this winter.”

“Dunkin’ Donuts is proud to support the efforts of the Marines who spearhead the Toys for Tots campaign,” said Eric Stensland, field marketing manager for Dunkin’ Donuts. “We are thrilled to be part of this extraordinary effort and salute the hundreds of volunteers and many partner organizations who have joined us in support of such an important program to our community.”

The Toys for Tots Foundation receives additional support from a number of companies and organizations throughout the greater Capital Region, including Wal-Mart, SEFCU, Clifton Park and Halfmoon EMS, and members of the Saratoga, Schoharie, and Fulton County Sheriff’s departments.