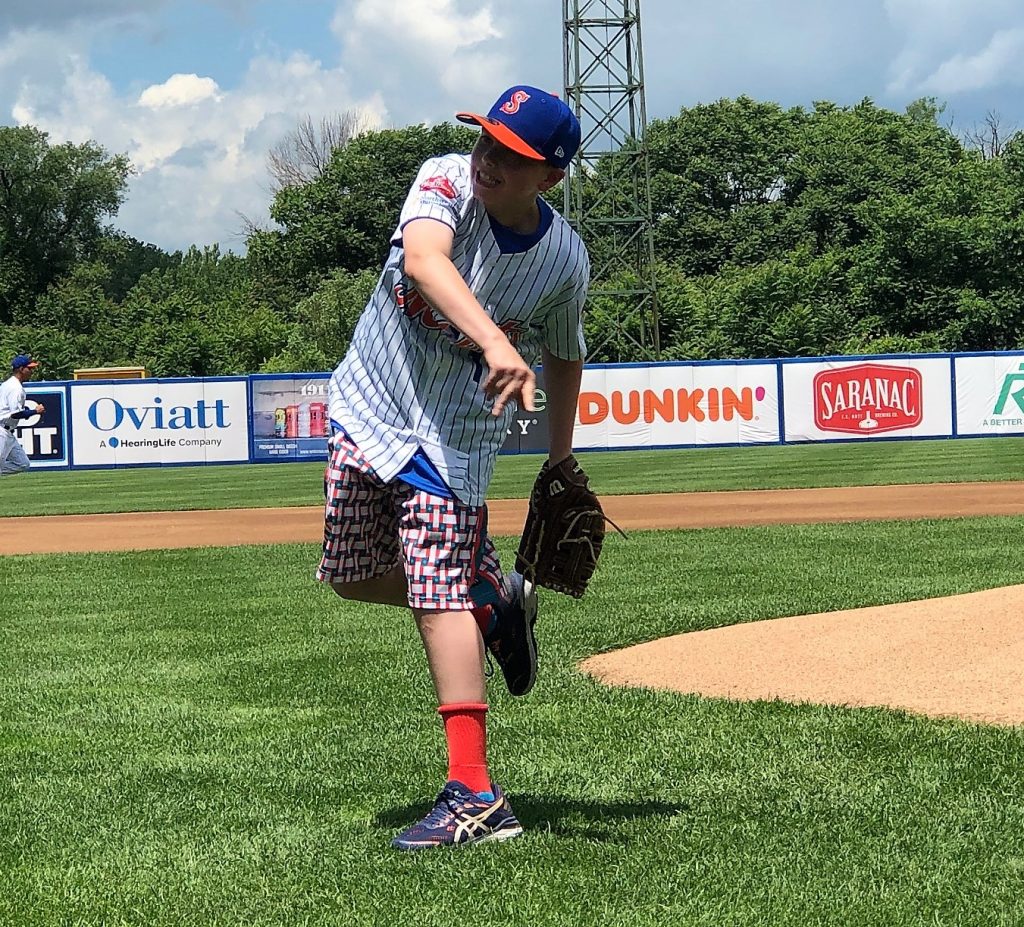 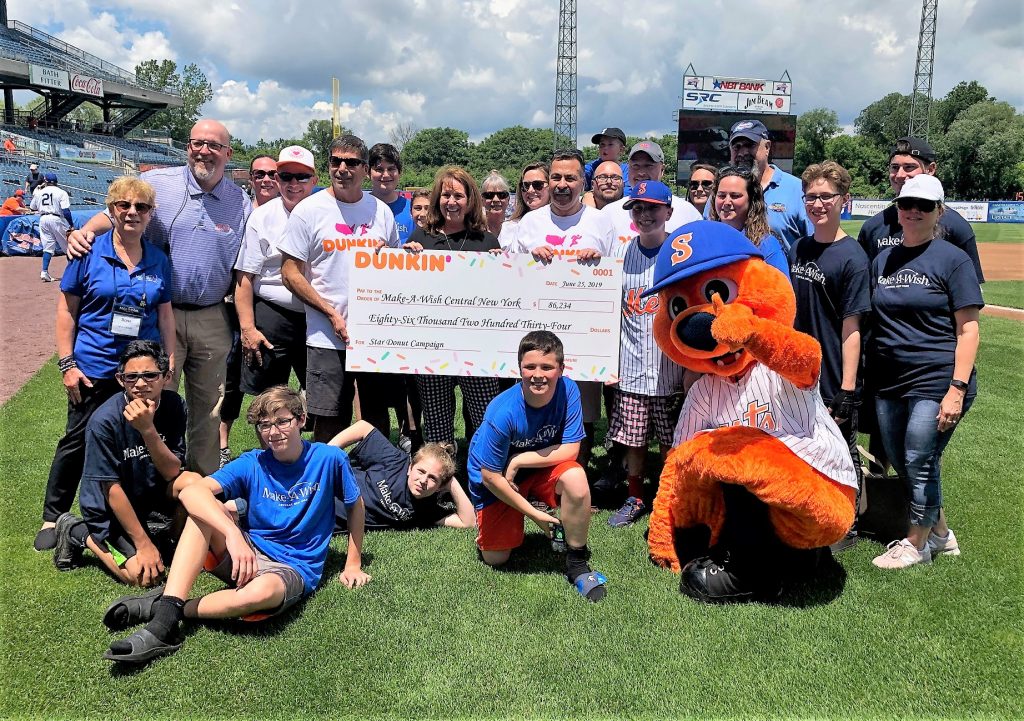 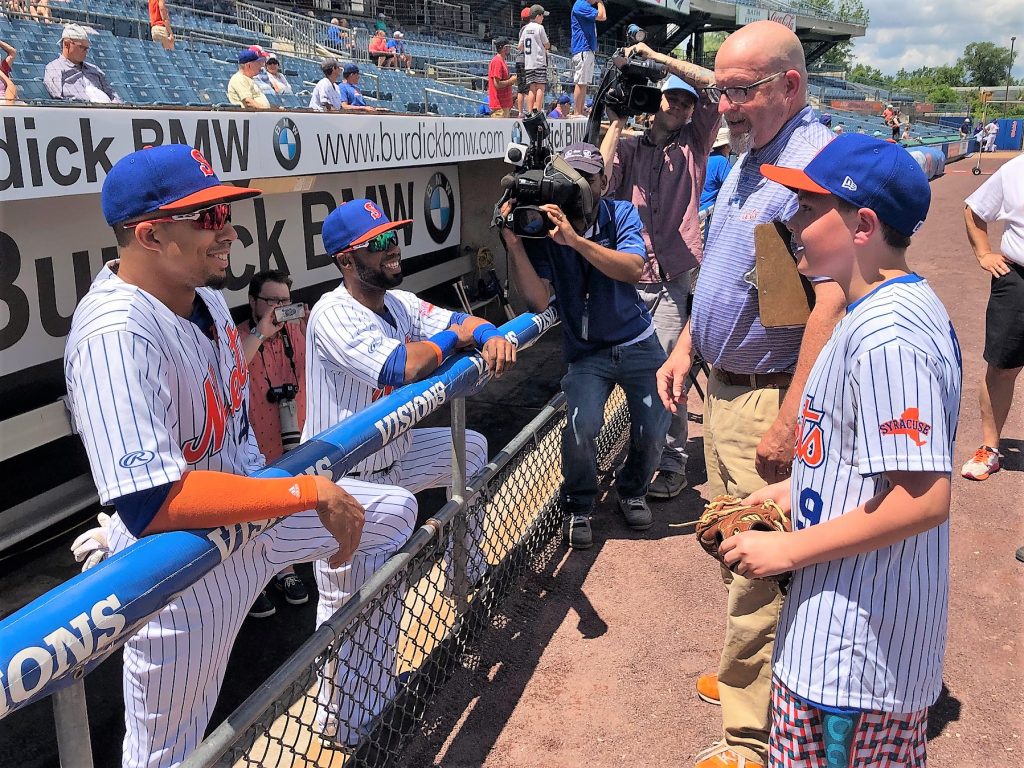 SYRACUSE, New York; June 25, 2019 – Dunkin’ today announced the results of its Make-A-Wish® Star Donut charitable campaign by presenting a record-breaking donation of more than $86,000 to Make-A-Wish® Central New York prior to the Syracuse Mets game at NBT Bank Stadium.

“Dunkin’ is honored to support Make-A-Wish Central New York, which works tirelessly to help make the wishes of local children come true,” said Eric Stensland, Integrated Marketing Manager for Dunkin’. “We’re glad we could provide Central New York residents with a special treat while supporting an organization that is so important to the children and families in our community. We would like to thank all of our guests who joined us during the Star Donut campaign and donated to help us raise record funds for the families supported by Make-A-Wish Central New York.”

From April 29, World Wish Day, through May 7, Dunkin’ guests who donated $1 to Make-A-Wish Central New York received a Star Donut as a thank you for their generosity. The initiative has now generated more than $448,000 since its inception in 2013. The proceeds from this charitable campaign benefit local Make-A-Wish chapters and the many children with critical illnesses they serve.

“The wishes granted through this campaign will bring hope, strength and joy to local children with life-threatening medical conditions,” said Diane Kuppermann, president and CEO of Make-A-Wish Central New York. “We thank Central New York residents for visiting Dunkin’ and enjoying a Make-A-Wish Star Donut while helping us reach every eligible wish child in the region.”

Dunkin’ and Make-A-Wish Central New York also hosted a wish party for Central New York Wish Kid Evan Andrews, who found out prior to the game that his wish to visit the Atlantis Resort in the Bahamas will come true. Andrews and his family were provided VIP treatment following the wish announcement by throwing the ceremonial first pitch and then celebrating with a wish party in a suite at NBT Bank Stadium to watch the baseball game.

The Onondaga County resident was diagnosed with Hodgkin’s Lymphoma and underwent treatment, which included rigorous chemotherapy, through fall 2018. Andrews has had clear scans and follow-up visits since that time and has shown no evidence of cancer almost one year later.

Make-A-Wish Central New York creates life-changing wishes for children with critical illnesses throughout a 15-county region of New York State. The organization has granted more than 1,800 wishes since inception in 1985.

Make-A-Wish® Central New York is a nonprofit, tax-exempt organization dedicated to creating life-changing wishes for children with critical illnesses. We are on a quest to bring every eligible child’s wish to life, because a wish is an integral part of a child’s treatment journey. Research shows children who experience wishes can build the physical and emotional strength they need to fight critical illness. Make-A-Wish Central New York is able to continue to share the power of a wish thanks to monetary contributions, airline mile donations, and the overall generous support of individuals and corporations throughout its 15-county region, which includes Broome, Cayuga, Chenango, Cortland, Herkimer, Jefferson, Lewis, Madison, Oneida, Onondaga, Oswego, Otsego, St. Lawrence, Tioga and Tompkins counties. Together, we transform lives one wish at a time. For more information, call (315) 475-WISH or visit www.cny.wish.org.

Founded in 1950, Dunkin’ is America’s favorite all-day, everyday stop for coffee and baked goods. Dunkin’ is a market leader in the hot regular/decaf/flavored coffee, iced regular/decaf/flavored coffee, donut, bagel and muffin categories. Dunkin’ has earned a No. 1 ranking for customer loyalty in the coffee category by Brand Keys for 12 years running. The company has more than 12,700 restaurants in 43 countries worldwide. Based in Canton, Mass., Dunkin’ is part of the Dunkin’ Brands Group, Inc. (Nasdaq: DNKN) family of companies. For more information, visit www.DunkinDonuts.com.