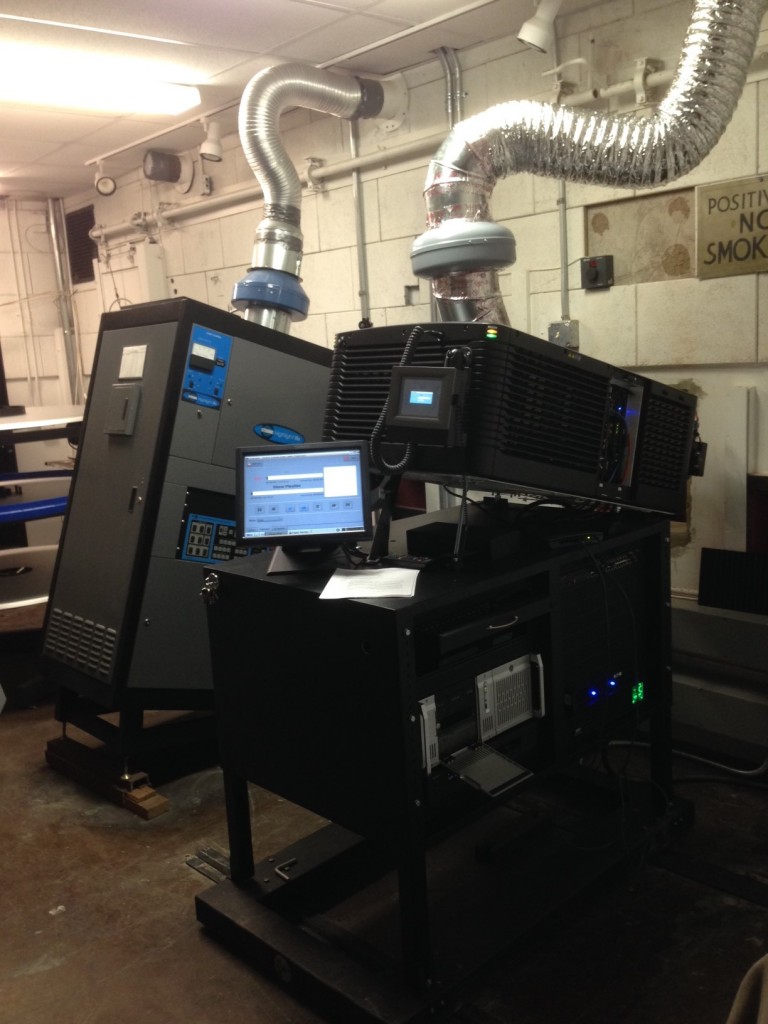 February 27, 2014 (Albany, NY) – The Palace Theatre announced today that the historic venue in downtown Albany will unveil its new digital projector during a day-long celebration of film in conjunction with Oscar weekend on Saturday, March 1.

Held one day before the 2014 Academy Awards honor the past year’s greatest films, the movie triple-header will begin with a free community screening of the popular family film Despicable Me 2 at 2 p.m. The afternoon will continue with showings of two recent Academy Award winning films: Shakespeare in Love at 5 p.m. and last year’s Best Picture winner Argo at 8 p.m. Tickets are required for the free community screening. Tickets for the two evening films are $5 each.

The event is designed to showcase how the new digital projector will not only widely expand the theatre’s current programming and reduce costs, but also vastly enhance the viewing experience by providing greater clarity and high-resolution color as well as improved audio. The new technology will increase the number of events on the theatre’s calendar by creating the opportunity to host current releases, movie premieres, film series and screenings at the Palace Theatre.

The equipment will also meet the technical requirements of some visiting performing artists and productions and provide the ability to screen live broadcasts, such as concerts and theatrical productions.

“This new system is a wonderful tribute to our roots as an old-time movie house as we bring the Palace into the 21st century. The digital projector will stimulate additional economic activity by allowing us to draw a larger audience to the theatre and to downtown Albany,” said Palace Theatre Executive Director Holly Brown. “The Palace is a comfortable and unique place to see a movie and a great place to gather with friends and neighbors. Our prices are affordable and we offer free parking as well as the best popcorn in town. We look forward to expanding our programming through this opportunity.”

The purchase and installation of the new digital projector is partially funded through a $76,500 grant from New York State’s third annual Regional Economic Development Council Awards through the New York State Council on the Arts’ Digital Film Projector Conversion Program. In addition to the award from the Council, the project is made possible by support from private funding sources and through the Palace Theatre’s surplus from its most recent fiscal year, which marks the second consecutive surplus for the organization.

“This grant to help enrich the cultural offerings available in Downtown Albany, like all the support provided to arts institutions through Governor Cuomo’s regional economic development councils, is a tremendous investment that helps attract visitors, increases business activity, and supports jobs.,” said Capital Region Economic Development Council Co-Chairs, James J Barba and Robert J. Jones. “This investment will be one more chapter in the story of how the Palace Theater’s renaissance has helped enrich Albany and our entire region.”

Tickets for all film screenings on March 1 are available by phone at (518) 465-4663, at all Ticketmaster locations or in-person at the Palace Theatre Box Office at 19 Clinton Avenue in Albany. Tickets are required for the free community screening at 2 p.m. The Palace Theatre Box Office is open Monday through Friday from 10 a.m. until 5 p.m. and on Saturday from 10 a.m. to 2 p.m.

The Palace Theatre provides free parking in conjunction with the Albany Parking Authority at the Quackenbush Garage in downtown Albany for all events at the historic entertainment venue, courtesy of First Niagara. To redeem free parking, Palace patrons are directed to present their event ticket stub at Quackenbush Garage. The garage is open two hours before and after all Palace events. Quackenbush Garage is located at 25 Orange Street.

For more information about the 2014 season at the Palace Theatre, visit www.palacealbany.com.

The Palace Theatre has been Albany’s iconic downtown landmark for the last eight decades – bringing the biggest names in entertainment to the Capital Region. This grand cultural and entertainment facility first opened its doors in October 1931. Built during the Depression, the 2,800-seat Palace was the largest theatre in the region noted for a number of opulent movie houses. Today, the Palace remains the sole survivor of this period of entertainment. Its storied stage has seen more than 5,000 stars such as Bob Hope, The Who, Bruce Springsteen, Jerry Seinfeld, and great Broadway hits like Jesus Christ Superstar, Hairspray and more.  Arguably the most notable concert event took place at the Palace Theatre in April of 1965 when the now legendary Rolling Stones appeared here on their first tour of the United States. The venue is managed by The Palace Performing Arts Center, Inc., a 501(c)(3) non-profit organization and currently plays host to more than 100 world-class arts and entertainment events each year.  The theatre has a significant economic footprint with over $3.5 million in ticket sales and 150,000 patrons annually. The Palace is a primary economic engine for downtown Albany.