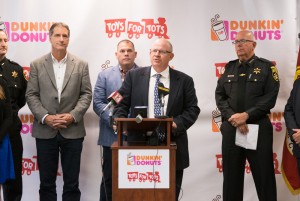 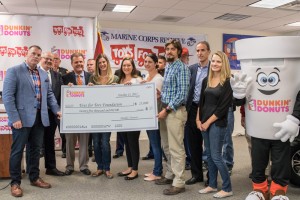 Schenectady, NY;– Dunkin’ Donuts and the Toys for Tots Foundation today announced that the Marine Corps Reserves’ Dunkin’ Donuts Toys for Tots Train, powered by Amtrak, will once again deliver holiday cheer to children across New York during the 2017 season. On Saturday, December 2 and Sunday, December 3, volunteers will travel aboard the train, distributing thousands of toys and winter coats to local non-profit organizations and children in need.

The initiative is anchored by Dunkin’ Donuts’ contribution of $30,000 to the 2017 Toys for Tots program, bringing its nine-year total in support of the holiday collection campaign to $260,000. The $30,000 contribution from Dunkin’ Donuts will fund the purchase of new toys and winter coats for children in need. The coats, which will be distributed throughout New York, will be collected and administered through the South Colonie Central School District.

This year’s Toys for Tots collection drive will take place at more than 400 locations throughout the Capital Region, including more than 100 local and regional Dunkin’ Donuts restaurants, which will serve as drop-off points for guests wishing to donate new, unwrapped toys.

Officials from Toys for Tots and Dunkin’ Donuts were joined by area campaign supporters for today’s announcement at Legere Restorations, LLC. The Schenectady-based business is donating warehouse space to serve as the home of the Capital Region Toys for Tots program.

“We are grateful to our community partners, including Dunkin’ Donuts, for their continued support to keep our holiday initiative running over the last nine years,” said Marine Gunnery Sgt. (Ret.) Albert Roman, local coordinator of the Capital Region Toys for Tots campaign. “We’d also like to thank Norfolk Southern and Amtrak for helping us deliver tens of thousands of toys to communities in upstate New York. Their generosity, along with that of Dunkin’ Donuts, Legere Restorations, LLC, and numerous other local companies and organizations, will bring new toys to thousands of children in New York this winter.”

“Dunkin’ Donuts is honored to once again support the efforts of the Marines who are the driving force behind the Toys for Tots campaign,” said Eric Stensland, field marketing manager for Dunkin’ Donuts. “Bringing joy to children in need is a goal Dunkin’ Donuts strives to accomplish throughout the year, and especially during the holiday season. Working alongside volunteers and partner organizations is an extraordinary example of the spirit and meaning of giving.”

The Toys for Tots Foundation receives additional support from a number of companies and organizations throughout the greater Capital Region, including a $25,000 donation from Wal-Mart and a raffle sponsored by Seymours Motorized Sports for a 2017 Can Am Outlander 850xt and Triton aluminum trailer ATV.