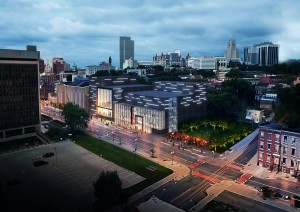 (Albany, NY) – The Palace Performing Arts Center, Inc., the not-for-profit corporation that operates the historic Palace Theatre, today presented its vision for a $65 million renovation and expansion project designed to further elevate arts and entertainment in the community and position the Palace Theatre as a unique and impressive gateway to downtown Albany.

The project, which will build out the Palace Theatre’s current footprint along North Pearl Street, will consist of multiple elements, including the addition of a new 600-seat theatre, community and educational space, and a video post-production center. Renovations will also occur within the main theatre to expand and enhance the current stage, as well as the lobby, box office and backstage areas.

The expansion is anticipated to have a $125 million economic impact on the community and produce an estimated 225 full-time jobs during the three-year construction period. The downtown Albany area is expected to see its annual economic impact more than double to $10 million as a result of the project upon completion, with the Palace drawing more than 500,000 patrons to the city each year.

“This project is undoubtedly the most transformative arts and culture redevelopment venture in Albany in recent memory, and will further invigorate the downtown area, spur economic development, create jobs and provide a more sustainable future for the arts in the Capital Region,” said Alan Goldberg, chair of the board of directors for the Palace Performing Arts Center. “We thank Albany Mayor Kathy Sheehan, Albany County Executive Dan McCoy and the community as a whole for their dedication as we seek to develop a true center for the arts in historic downtown Albany.”

Officials from the community today joined Palace Performing Arts Center board members and executives to support the strategic growth plan, which will complement ongoing developments in downtown Albany, including the construction of the Albany Capital Center and improvements to the atrium of the Times Union Center.

“Since the Palace Theatre opened its doors in 1931, the venue has provided a wide array of cultural events and served as a hub for the creative community in Albany and in the Capital District,” said Albany County Executive Daniel P. McCoy. “At a time when similar facilities are facing fiscal challenges, this project affirms the Palace Theatre’s standing in the community and commitment to completing the Albany entertainment triangle which includes the Albany Capital Center and the Times Union Center.”

In order to facilitate these developments, ownership of the Palace Theatre building will be transferred to the Palace Performing Arts Center from the City of Albany, pending approval from the Albany Common Council.

“The Palace Performing Arts Center has experienced tremendous growth under the leadership of Holly Brown and her partners at Park Playhouse and Albany Symphony,” said Albany Mayor Kathy M. Sheehan. “This ambitious expansion plan will create an even more dynamic venue for arts and entertainment in downtown Albany.”

Today’s announcement follows a period of significant growth and success for the Palace Performing Arts Center. Over the past four years, the Palace has experienced a major fiscal renaissance under the leadership of its executive management team and has increased the number of shows by 53 percent over the last four years.

The Palace has also been a leader in community arts collaboration, most prominently demonstrated through shared services agreements with Park Playhouse and Albany Symphony; as well as the recently announced venue management agreement with Cohoes Music Hall, through which the Palace will oversee all programming at the fourth oldest operating music hall in the country.

“The expansion and renovation of the Palace will have a long and lasting impact on downtown Albany and the Capital Region. In addition to increasing the opportunities for residents to experience a wider variety of world-class shows and events, our new education program will make the arts more accessible to the next generation of performers and theatregoers,” said Palace Theatre Executive Director Holly Brown. “We are excited to announce these plans to the community and truly believe that our vision will enhance the quality of life of residents in Albany and the Capital Region.”

The Palace Performing Arts Center project will include the following elements:

For more information about the Palace Theatre and to purchase tickets to upcoming events, visit palacealbany.com.

The Palace Theatre has been Albany’s iconic downtown landmark for the last eight decades – bringing the biggest names in entertainment to the Capital Region. This grand cultural and entertainment facility first opened its doors in October 1931. Built during the Depression, the 2,800-seat Palace was the largest theatre in the region noted for a number of opulent movie houses. Today, the Palace remains the sole survivor of this period of entertainment. Its storied stage has seen more than 5,000 stars such as Bob Hope, The Who, Bruce Springsteen, Jerry Seinfeld, and great Broadway hits like Jesus Christ Superstar, Hairspray and more.  Arguably the most notable concert event took place at the Palace Theatre in April of 1965 when the now legendary Rolling Stones appeared here on their first tour of the United States. The venue is managed by The Palace Performing Arts Center, Inc., a 501(c)(3) non-profit organization and currently plays host to more than 100 world-class arts and entertainment events each year.  The theatre has a significant economic footprint with over $4 million in ticket sales and 175,000 patrons annually. The Palace is a primary economic engine for downtown Albany.