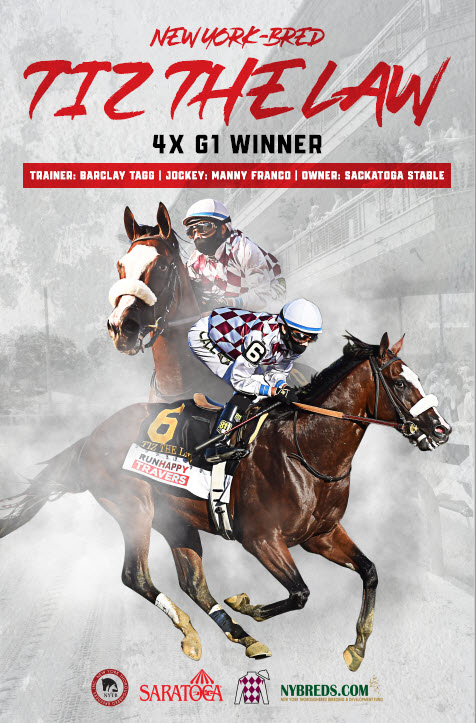 New York craft beverages and spirits to be highlighted

The afternoon will feature six stakes reserved exclusively for New York-breds headlined by the $250,000 Albany, a nine-furlong test for sophomores. Also featured are a trio of $200,000 stakes in the Fleet Indian for sophomore fillies; the Funny Cide, presented by Rood and Riddle Equine Hospital, for juvenile sprinters; and the Seeking the Ante for juvenile filly sprinters. Rounding out a special Empire State-bred slate are a pair of $150,000 turf events with the West Point Handicap presented by Trustco Bank for 3-year-olds and up and the Yaddo for fillies and mares 3-years-old and up.

“New York Showcase Day is the flagship event on the calendar for our state’s breeders and owners,” said New York Thoroughbred Breeders, Inc. Executive Director Najja Thompson. “We’re proud to partner with NYRA to feature an all New York-bred card at the premier racing meet in the country with lucrative purses and six state-bred stakes totaling $1.15 million.”

“New York Showcase Day is an event we look forward to each year as we highlight the strength and success of the New York thoroughbred breeding program,” said NYRA Senior Director of Communications Pat McKenna. “We encourage fans to join us for an outstanding afternoon of racing, entertainment and offerings that underscore the diverse products and talent from the Empire State.”

Free grandstand admission tickets to select days during the final week of Saratoga will be available with a donation of canned food to benefit a Saratoga Springs non-profit organization.

The trio will offer autographed editions of a commemorative Tiz the Law poster at the Jockey Silks Room Porch from 11:30 a.m. to 12:30 p.m. with a recommended donation to the Backstretch Employee Service Team and the New York Race Track Chaplaincy. Tiz the Law hats and t-shirts will be available for an additional donation.

Tiz the Law posters are free throughout the day at NYRA Bets Squad kiosks and Guest Services locations, while supplies last.

The collection will take place at the Community Outreach Booth next to the Jockey Silks Rooms Porch from 11 a.m. to 5 p.m. Suggested donation items include pasta, peanut butter, cereal, rice, soup and canned vegetables.

The Knight Caps, the official glee club of the United States Military Academy at West Point, will begin the day with a special performance of the National Anthem.

The cadets will again perform for the crowd from the winner’s circle following the $150,000 West Point Handicap, presented by Trustco Bank.

The craft beer specials will be available at the Fourstardave Sports Bar and nearby Druthers Brewing Company Gazebo, as well as the Saranac Brewery portable bar on the second floor of the grandstand.

New York-based spirits producer Cooperstown Distillery will offer complimentary samples of its Fenimore Gin Cucumber Cooler from 1 p.m. to 5 p.m. at the Jim Dandy Bar, presented by Cooperstown Distillery. The Fenimore Gin Cucumber Cooler will be the featured drink of the afternoon available at all dining areas, including The Porch, Club Terrace and Turf Terrace.

New York Showcase Day takes place on the eve of the 152nd edition of the Runhappy Travers on Saturday, August 28. Gates on Runhappy Travers Day open at 7 a.m. with first post time of 11:35 a.m.

General admission tickets are $15 when purchased in advance. The walk-up price on Runhappy Travers Day is $20. Tickets may be purchased in-person at the NYRA Box Office by Gate A or online at NYRA.com/Travers (service fees apply online).

The 2021 summer meet at Saratoga Race Course runs through Labor Day, Monday, September 6. Racing is conducted five days a week, Wednesdays through Sundays, with the exception of the final week, when the meet concludes on Labor Day.