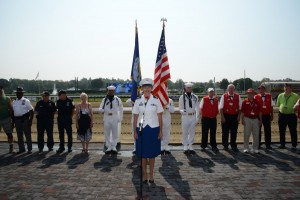 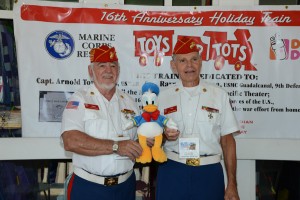 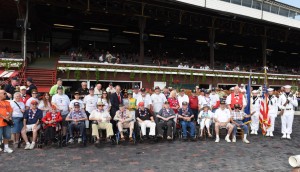 “The New York Racing Association is honored to recognize the service and sacrifice of the men and women of the United States military,” said NYRA CEO and President Chris Kay. “We were thrilled to host our service members and veterans, including those from the ‘Greatest Generation,’ with a day dedicated in their honor.”

NYRA paid tribute to its service member and veteran employees with a special ceremony in the winner’s circle during the National Anthem, which was performed by Master Sergeant Mary Kay Messenger of the West Point United States Military Academy. The National Anthem was accompanied by a Presentation of Colors from members of the Naval Support Activity Saratoga. Master Sergeant Messenger returned to the winner’s circle to perform God Bless America following the day’s third race.

World War II veteran Gene Gierka, 91, of Schenectady, NY, who served in the U.S. Air Force including one year of service in Germany, rang the bell in the winner’s circle seven times at 17 minutes to post before the day’s second race to commemorate the 70th anniversary of VJ Day, which occurred on September 2, 1945, marking the formal surrender of the Japanese Army and the official end of World War II.

“It’s unbelievable,” said Gierka of his experience at Saratoga Race Course on Military Appreciation Day. “I often said that for 50 years we were forgotten, but that for the last 20 years there’s been so much credit given to the Greatest Generation. I’m glad I’m here.”

Several other World War II veterans joined Gierka in the winner’s circle to present the trophy for the day’s second race. The veterans are beneficiaries of the Leatherstocking Honor Flight, which transports American veterans to Washington D.C. to visit national memorials dedicated to honoring their service and sacrifices.

Artwork created by veterans participating in the fine arts program of the Veterans Services Project at Living Resources was on display at the Saratoga Pavilion. The program provides local military veterans who have been diagnosed with post-traumatic stress disorder and/or traumatic brain injuries with an outlet to express their emotions as they transition to civilian life. Artist veterans Conan O’Rourke and Cynthia VanBergen gathered in the winner’s circle to present the trophy for the day’s third race.

The Community Outreach Booth hosted the Toys for Tots Foundation, a national movement organized by the U.S. Marine Corps Reserve to collect new, unwrapped toys to distribute as holiday gifts for less fortunate children. The Capital Region Toys for Tots campaign works with more than 200 community agencies to distribute toys and serves more than 200,000 area children. At the Community Outreach Booth, members of the Marine Corps League volunteering with the Capital Region Toys for Tots program gave its toy collection a head start by accepting monetary donations and new, unwrapped toys.

A New York National Army Guard Humvee and a U.S. Marine Corps Reserve Jeep was positioned outside the Clubhouse gates while a Light Medium Tactical Vehicle was located next to the Horse Sense exhibit.

A number of activities were available for guests at the Saratoga Pavilion throughout the afternoon, including a rock climbing wall, dog tag machine and football toss with the New York National Guard; pull-up bar challenge with the U.S. Marine Corps Reserve; disc golf with Naval Support Activity Saratoga Springs; hand-cycle demonstration from STRIDE Adaptive Sports; ring toss and t-shirt giveaways from the Veterans Miracle Center; face painting with a $2 donation to Operation Adopt-A-Soldier; and temporary tattoos with a donation to the Disabled American Veterans. Fans will also have the opportunity to write thank you cards to service members with Stars for Our Troops.