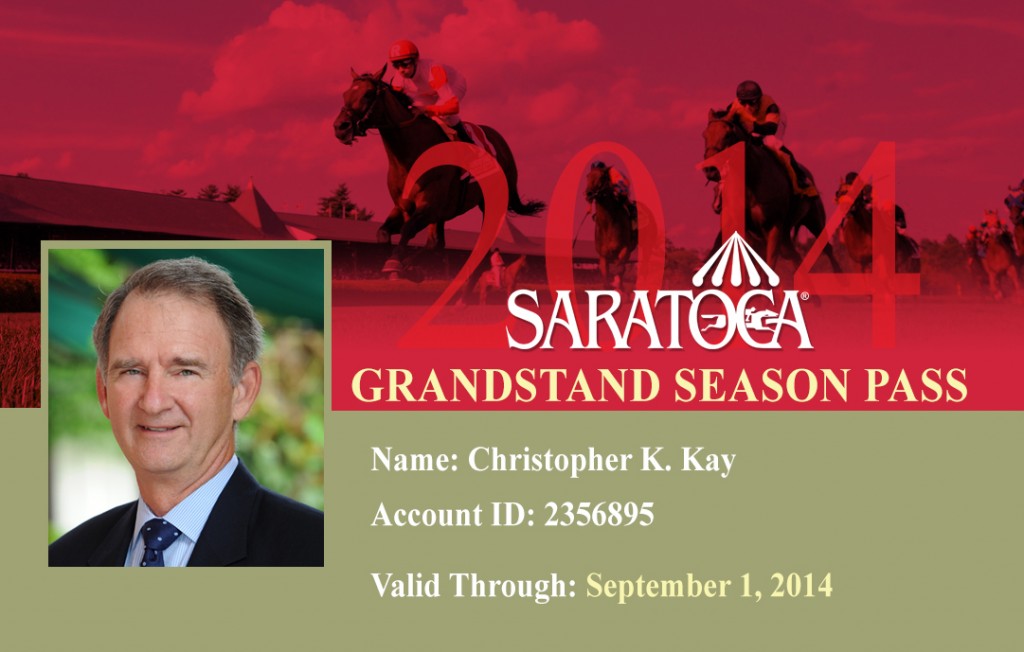 SARATOGA SPRINGS, N.Y. – The New York Racing Association, Inc. today announced a new partnership with Stewart’s Shops that will for the first time offer racing fans the opportunity to purchase season passes for Saratoga Race Course at more than 150 retail outlets throughout the greater Capital Region.

Valid for each day of the upcoming season, Friday, July 18 through Monday, September 1, the season pass offers significant savings to Saratoga’s most loyal guests. The 2014 grandstand season pass is available for $30, a decrease in price of 14 percent in comparison to the 2013 rate. The 2014 clubhouse season pass is available for $50, a 33 percent price reduction in comparison to 2013. Daily admission prices for the 2014 Saratoga season are $5 for grandstand and $8 for clubhouse.

Season passes for both the grandstand and the clubhouse will be available beginning today at 151 Stewart’s Shops locations in Albany, Rensselaer, Saratoga, Schenectady and Warren counties. The season passes will remain on sale at Stewart’s Shops through August 1. A season pass provides racing fans with the opportunity to enjoy 40 days of world-class thoroughbred racing at Saratoga Race Course, including the Grade 1, $1.25 million Travers on Saturday, August 23 and the Grade 1, $1.5 million Whitney on Saturday, August 2.

Saratoga season pass holders will also receive a $10 discount on general admission to The Great Escape & Splashwater Kingdom theme park in Lake George, NY. The discount is redeemable at The Great Escape ticket windows with a Saratoga grandstand or clubhouse season pass and is valid daily from May 29 through July 17; Tuesdays only from July 18 through September 1; and on operating days from September 6 through November 2.

“The summer season at Saratoga is undoubtedly one of the nation’s premier race meetings. We are excited to offer this tremendous value to our most loyal fans for what will certainly once again be a truly outstanding 40 days of racing and the finest meet in North America,” said The New York Racing Association CEO and President Chris Kay. “The season pass provides an unprecedented savings for our patrons who wish to enjoy multiple days at the Spa. I am thrilled to partner with Stewart’s Shops to make purchasing a season pass easier and more convenient than ever before.”

“Stewart’s Shops has had a long, friendly relationship with Saratoga Race Course and we are thrilled to continue this partnership,” said Stewart’s Shops President Gary Dake. “We hope the season pass program will prove valuable for the track and the city of Saratoga Springs, as well as our customers all over the Capital Region area.”

“The new season pass offers frequent track visitors, many of whom are Saratoga Springs residents, a fantastic value in gratitude for their loyalty, support and continued patronage of Saratoga Race Course,” said City of Saratoga Springs Mayor Yepsen. “It is my hope that the season pass offers longtime racing enthusiasts a convenient and affordable way to enjoy the sport while also encouraging new fans to fully embrace the Spa.”

Mayor Yepsen joined executives from the New York Racing Association and Stewart’s Shops at the Stewarts’s location on Wade Road Extension in Latham to purchase the first Saratoga season pass from the quick-service convenience store.

All season pass holders will be required to have his or her photo taken at Saratoga Race Course in order to activate the season pass beginning at the annual pre-season Open House on Sunday, July 13 through Thursday, July 17 from 9:30 a.m. to 4:30 p.m. Beginning on Opening Day, Friday, July 18, activations will occur daily (except Tuesdays) from 8 to 10 a.m. and 4 to 6 p.m.