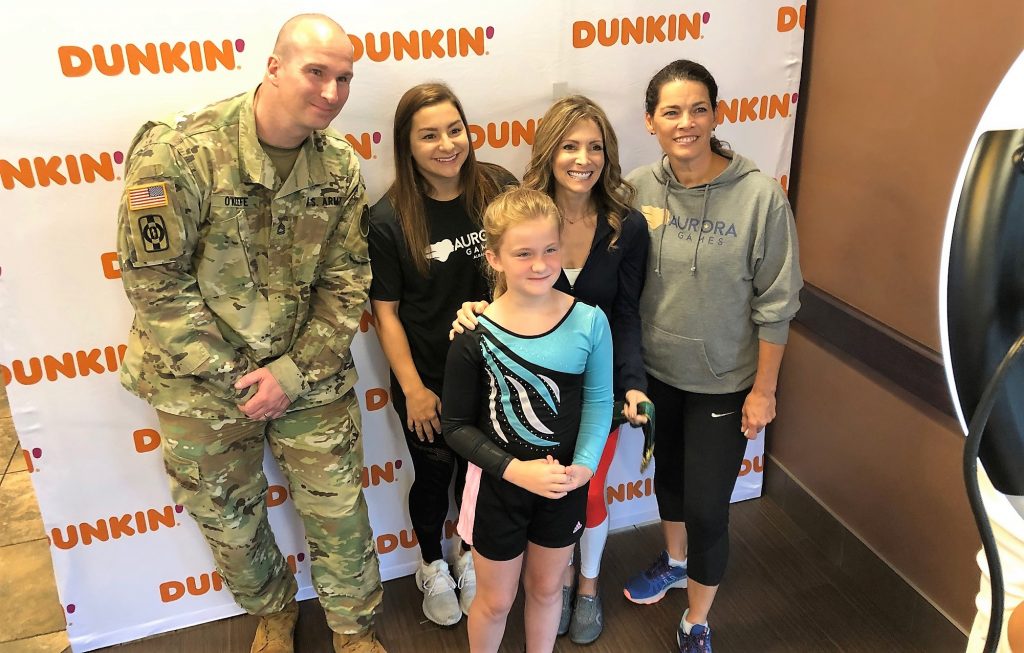 The appearance took place just hours before Kelley competes for Team Americas in the gymnastics event at the Aurora Games, which will begin at 7 p.m. at the Times Union Center in downtown Albany. Dunkin’ is the official sponsor of the gymnastics competition.

During the event, the athletes served coffee to guests at the front counter, took pictures with fans, signed autographs and awarded tickets to the gymnastics event.

The Aurora Games is a six-day, six-sport, all-women’s international sports and entertainment festival being held August 20-25 at the Times Union Center in Albany. Approximately 150 world-class athletes, including Olympic medalists and national champions from around the globe, are set to compete in the Aurora Games. In addition to gymnastics, the Aurora Games features competition in women’s tennis, basketball, figure skating, ice hockey and beach volleyball, along with a table tennis exhibition at the Albany Capital Center.

The gymnastics event will also feature former UCLA star Katelyn Ohashi, whose floor exercise routine lit up the internet during her recently completed final season of collegiate competition. She will be joined on Team Americas by Kelley, who is the daughter of 1984 Summer Olympics gold medalist Mary Lou Retton.

Team World will be represented by the British-born Danusia Francis, who currently competes for Jamaica in international competition.

The gymnastics competition will conclude with a group number choreographed by Valorie Kondos Field, the longtime UCLA gymnastics coach who recently announced her retirement and will oversee the competition.

Individual session tickets for the Aurora Games are on-sale now at www.Ticketmaster.com. Tickets are available starting at just $15. Children may qualify for half-price tickets based on seating selection.