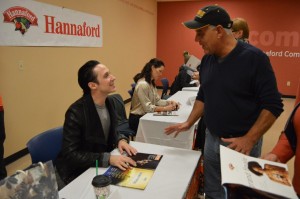 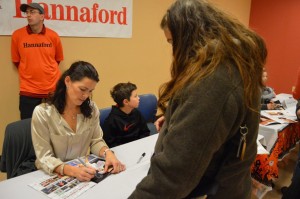 ALBANY, New York – Hannaford Supermarkets today announced that it will host two-time Olympic medalist Nancy Kerrigan at its Central Avenue store at 900 Central Avenue in Albany on Saturday, October 17 from 2 to 3 p.m.

Kerrigan will be joined by fellow champion figure skaters Johnny Weir and Alissa Czisny to sign autographs and take photos with fans during the special meet and greet at Hannaford. The free event is limited to the first 100 guests who will each receive from Hannaford a commemorative Hannaford Halloween on Ice program book featuring photos and bios of each of the celebrity skaters.

The appearance comes in advance of the trio’s performance that evening in Hannaford and Nancy Kerrigan’s Halloween on Ice, presented by Mussellman’s, at the Times Union Center in downtown Albany at 7 p.m. The Halloween-themed show tells a spooky, kid-friendly tale with spectacular skating, wild costumes and extravagant scenery.

“Hannaford is thrilled to welcome Olympic medalist Nancy Kerrigan and her co-stars to the Capital Region. Nancy is a true figure skating icon and an inspiration to athletes of all ages,” said Hannaford Community Relations Specialist Brian Fabre. “We encourage fans to join us not only for a special afternoon with true Olympians, but also that evening for a memorable performance featuring an all-star cast of figure skating greats.”

In addition to hosting the special meet and greet, Hannaford will provide Halloween on Ice attendees with the opportunity to upgrade their tickets to that evening’s performance. Fans are invited to visit the Hannaford booth on the concourse at the Times Union Center before the show to enter-to-win a four pack of upgraded seats to the performance.

Weir is a three-time U.S. champion, two-time Olympian and World medalist. Upon his retirement from competitive figure skating in 2013, Weir became a figure skating analyst for NBC Sports and provided hours of live commentary during the 2014 Olympic Games in Sochi.

Czisny is a two-time U.S. champion, the 2010 Grand Prix Final champion, a two-time Skate Canada champion and the 2011 Skate America champion. She was one of four figure skaters featured on the TLC series Ice Diaries, which followed aspiring figure skaters who were attempting to make the 2006 Olympic team.

For more information about Hannaford Halloween on Ice or to purchase tickets for the show, visit www.timesunioncenter.com.

Hannaford Supermarkets, based in Scarborough, Maine, operates 188 stores in the Northeast. Stores are located in Maine, New York, Massachusetts, New Hampshire, and Vermont. Hannaford employs more than 27,000 associates. Additional information can be found at www.hannaford.com.