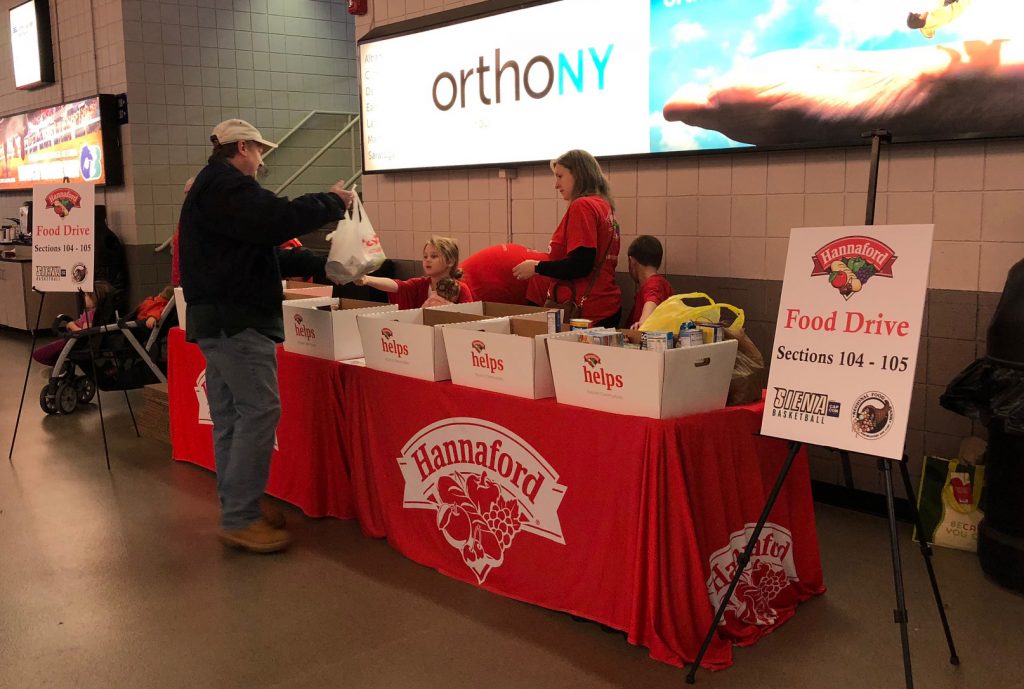 This year’s edition of the food drive marks the third annual partnership between Hannaford Supermarkets and Siena Athletics.

“Hannaford is committed to fighting hunger and we are thrilled to work with Siena which is equally dedicated and passionate about this cause. We extend our sincere gratitude to the thousands of fans who joined in our efforts to support the Regional Food Bank of Northeastern New York,” said Hannaford Supermarkets Community Relations Specialist Brian Fabre. “We hope this result will help the Food Bank provide for families well into the New Year.”

“We thank our fans for showing such tremendous generosity and contributing to such a bountiful collection for the Food Bank. We’d also like to thank Hannaford for their partnership in this annual effort,” said Siena College Vice President and Director of Athletics John D’Argenio. “We look forward to seeing fans who donated later this season as we continue to unleash mayhem during this new era of Siena basketball.”

The food drive coincides with a critical time of need for the Regional Food Bank of Northeastern New York, which traditionally experiences a significant decrease in donations following the generosity of the holiday season.

“The Regional Food Bank was proud to partner with Hannaford and Siena once again on a beginning of the year food drive. It was our most successful year yet. What a great way to start the year,” said Regional Food Bank of Northeastern New York Executive Director Mark Quandt. “We are very grateful to both Siena and Hannaford for being such outstanding supporters of the Food Bank and for their commitment to assisting the hungry in our area.”