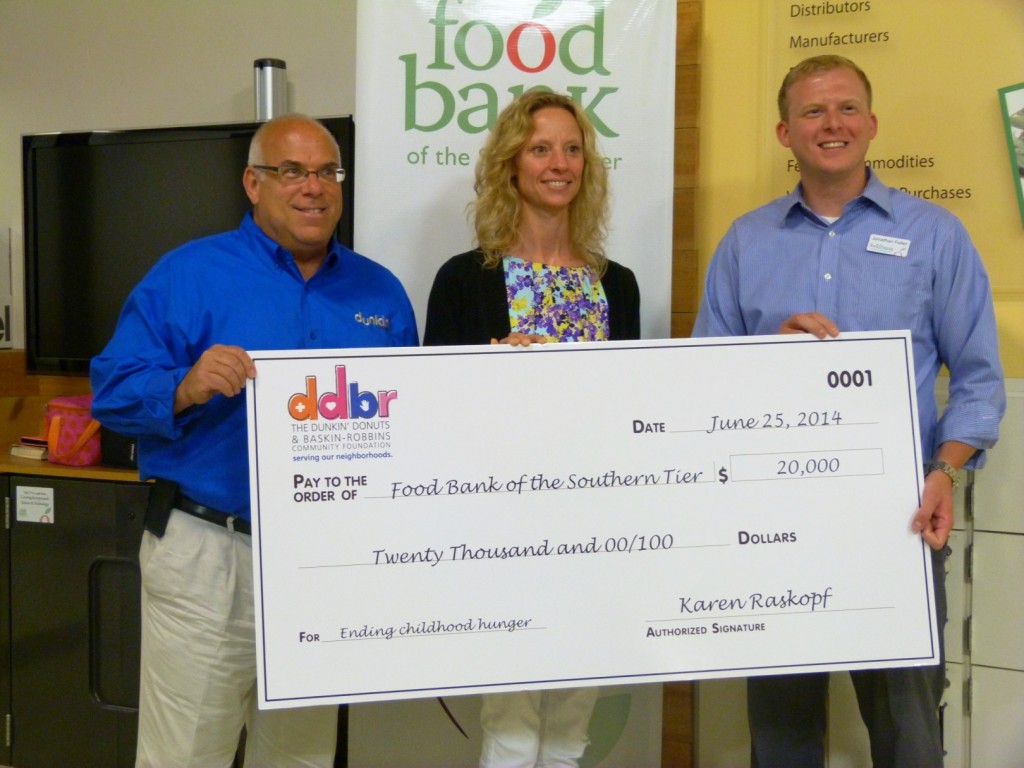 Southern Tier, NY – The Food Bank of the Southern Tier announced today that they have received a $20,000 grant from The Dunkin’ Donuts & Baskin-Robbins Community Foundation (DDBRCF).  The donation is part of a three-year, $1,000,000 grant from DDBRCF to Feeding America to support critical child hunger initiatives nationwide.  The grant will help more than 2,200 children who struggle with hunger in the Southern Tier through the BackPack Program™.
The Backpack Program provides hungry children with nutritious and easy-to-prepare food to take home on weekends and school vacations when other resources are not available.

“This grant will help us take an important step forward in growing the BackPack Program™ throughout the Southern Tier,” said Natasha Thompson, President & CEO of Food Bank of the Southern Tier. “DDBRCF’s donation will allow us to expand our service throughout our six counties in the 2014-2015 school year.”

The $20,000 grant will be put to use throughout the Southern Tier to provide an additional 16,700 meals to children in need. The Food Bank’s BackPack Program™ currently works with 39 school districts in the six counties they serve, providing more than 225,000 meals throughout the 38 week school year.

According to Mitch Cohen, a Dunkin’ Donuts and Baskin-Robbins Franchisee and Co-Chair of The Dunkin’ Donuts & Baskin-Robbins Community Foundation, “Dunkin’ Brands and its franchisees are committed to serving the basic needs of our communities throughout the country, each and every day. One of the most pressing needs facing our communities is the fight against hunger, particularly childhood hunger. We are proud to make the largest donation in the Foundation’s history to Feeding America to support this cause, and we look forward to continuing to partner with Feeding America member food banks in 2014 and beyond.”

The $1,000,000 DDBRCF grant, the largest donation in the Foundation’s history, will be distributed among Feeding America member food banks across the United States over the next three years.  The DDBRCF has partnered with Feeding America at the national level since 2007 and, in addition to the most recent grant, has donated more than $1,000,000 over the past seven years to support Feeding America and its local food banks.

Additionally, over the past seven years, the DDBRCF has addressed the issue of hunger relief through both national and local effort. Dunkin’ Donuts and Baskin-Robbins franchisees have held fundraisers to support local food banks, led food drives in the communities they serve and organized volunteer days at their local food banks to help fill backpacks with nutritious meals for children.

ABOUT THE FOOD BANK OF THE SOUTHERN TIER

Established in 1981 and headquartered in Elmira, NY, the Food Bank of the Southern Tier distributes food and other grocery products to people in need through a network of more than 160 member agencies including food pantries, soup kitchens, shelters and other hunger relief organizations in Broome, Chemung, Schuyler, Steuben, Tioga and Tompkins Counties. The Food Bank also administers several direct service food distribution programs including the BackPack Program™ and Mobile Food Pantry. The Food Bank is a member of Feeding America and a regional agency of Catholic Charities of the Diocese of Rochester. The Food Bank helps fulfill Catholic Charities’ commitment to create a just and compassionate society rooted in the dignity of all people by working together to build and sustain hunger free communities throughout the Southern Tier.

About The Dunkin’ Donuts & Baskin-Robbins Community Foundation:The mission of The Dunkin’ Donuts & Baskin-Robbins Community Foundation is to serve its neighborhoods by taking care of their basic needs: hunger, children’s health and safety. The DDBRCF brings together a wide network of stakeholders, including franchisees, crew members and employees to serve their local communities. Launched in 2006, The DDBRCF has granted more than $4,500,000 to local charities.