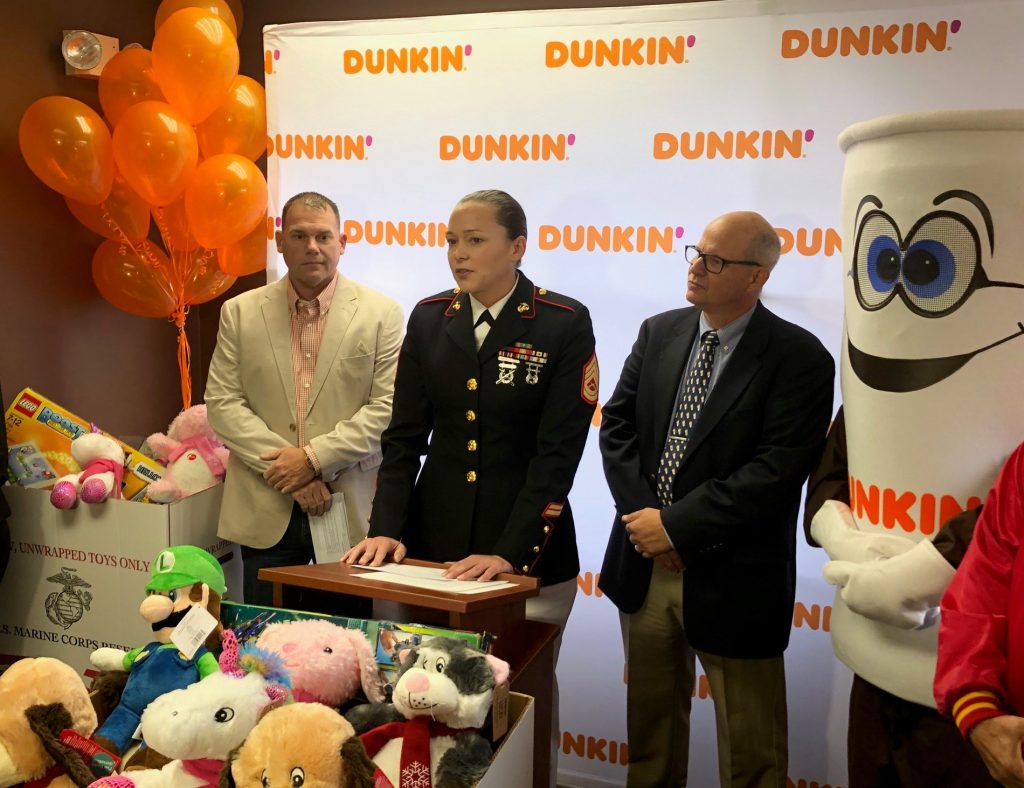 Marine Gunnery Sgt. Darcel Carver announces the U.S. Marine Corps Reserve will have a full-time presence in Binghamton for the first time to administer the new Binghamton Toys for Tots collection campaign.

Binghamton, NY;– Dunkin’ and the U.S. Marine Corps Reserve today announced a new partnership which will widely expand the reach of the Toys for Tots holiday collection campaign in the greater Binghamton area.

The U.S. Marine Corps Reserve will have a full-time presence in Binghamton for the first time to administer the iconic Toys for Tots campaign in partnership with Dunkin’ franchisees throughout the region. More than 25 local Dunkin’ restaurants will serve as drop-off points for guests wishing to donate new, unwrapped toys this holiday season.

The Toys for Tots campaign has previously served children in the Binghamton community as the initial stop aboard the U.S. Marine Corps Reserve Dunkin’ Toys for Tots Train, which Dunkin’ has annually supported with a $30,000 donation for more than a decade.

The donation will be used to purchase toys and coats which are distributed to children each December in Binghamton, Bainbridge, Oneonta, and across upstate New York. Dunkin’ franchisees and associates will join the Marines and other volunteers when the U.S. Marine Corps Reserve Dunkin’ Toys for Tots Train is expected to depart Binghamton on Saturday, December 7.

Dunkin’ will help warm-up the volunteers and families at select stops with complimentary hot chocolate and baked goods during the annual holiday train delivery.

Anchored by Dunkin’ for more than a decade, the regional Toys for Tots program was recently named the 2018 National Toys for Tots Campaign of the Year. The campaign received the national honor following an extensive review by the Toys for Tots Foundation of more than 800 communities covering all 50 states, the District of Columbia, Puerto Rico, Guam, and the Virgin Islands.

“We are thrilled to be recognized as the National Toys for Tots Campaign of the Year and excited to launch a brand-new holiday collection campaign in the Binghamton community,” said Marine Gunnery Sgt. (Ret.) Albert Roman, regional coordinator of the Toys for Tots campaign. “This region has always served as a tremendous host for the annual kick-off of our train delivery program and now we are starting a campaign to support the children right here in the Binghamton community. We are grateful to Dunkin’ for its continued support of our holiday initiative and helping bring new toys to thousands of children in New York this holiday season.”

“Dunkin’ is honored to support the efforts of the Marines, who are the driving force behind the Toys for Tots campaign. We are thrilled that their dedication and hard work to serve children will now include a full-time presence in Binghamton in partnership with our local franchisees,” said Eric Stensland, integrated marketing manager for Dunkin’. “Bringing joy to children in need is a goal Dunkin’ strives to accomplish throughout the year and especially during the holiday season. Working alongside volunteers and partner organizations is an extraordinary example of the spirit and meaning of giving.”

The Marines will work with more than 200 community agencies to distribute toys this holiday season and will be equipped to serve 200,000 children. The Toys for Tots Foundation receives additional support from a number of companies and organizations throughout the region, including Dunkin’, DeNooyer Chevrolet and SEFCU.