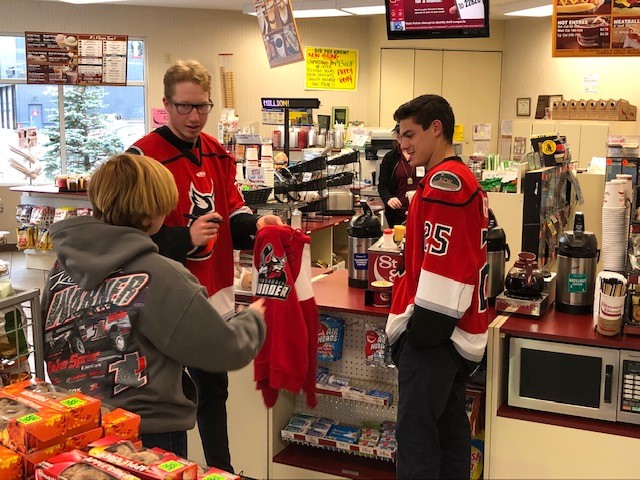 Glens Falls, NY; – Players from the Adirondack Thunder hockey team spread out across the Capital Region today to greet fans at several Stewart’s Shops as they prepared to hit the ice for this weekend’s home opener in Glens Falls.

Players from the Capital Region’s only professional hockey team surprised fans with ticket and merchandise at each of their stops to generate excitement in advance of the team’s home opener on Saturday, October 19 at the Cool Insuring Arena in downtown Glens Falls. The Thunder will host the Worcester Railers at 7 p.m.

“We thank Stewart’s Shops for hosting our players and supporting Adirondack Thunder hockey,” said Adirondack Thunder President Jeff Mead. “We look forward to giving local fans plenty to cheer about all season long as the team gears up for the start of our home schedule.”

Fans interested in cheering on the team Saturday night can take advantage of the Stewart’s 4 Pack for Thunder Opening Night which includes four tickets, four Thunder commemorative cups, and a $20 Stewart’s gift card. The package is available for purchase at the Cool Insuring Arena box office or online at ECHLThunder.com.

The first 3,000 fans with paid admission on Opening Night will receive a light up stick giveaway, courtesy of Catseye Pest Control.

“We’re delighted to give our customers the opportunity to meet members of the Capital Region’s only professional hockey team and score some Thunder souvenirs and tickets,” said Erica Komoroske, public relations specialist for Saratoga Springs, NY-based Stewart’s Shops. “Stewart’s is partnering with the team for special ticket packages throughout the season so local fans can enjoy the excitement of Thunder hockey in a family friendly venue at affordable prices.”

The Thunder, a proud affiliate of the National Hockey League’s New Jersey Devils, opened the season Oct. 11 with three straight road games. Adirondack is looking to build off of last season’s second-place finish in the ECHL’s North Division and a berth in the playoffs.

“You have fans that are so passionate here that they kind of bring things to another level,” said forward James Henry, now in his fifth season with Adirondack.

“It’s good to get back home,” said defenseman Colby Sissons. “Saturday night we’re looking to come out hot. It’s going to be a good year for the Thunder and home games are going to be really exciting.”

Single game and season tickets for the 2019-20 season are on sale now. For more information on ticket packages, call 518-480-3355 or visit ECHLThunder.com. For all the latest Adirondack Thunder news, follow the team on all social media @ECHLThunder.