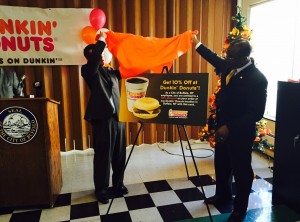 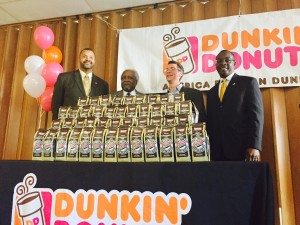 The coffee donation will be distributed to senior centers throughout Buffalo, NY.

The announcement came today during a free breakfast provided by Dunkin’ Donuts to 75 seniors at the Richmond-Summer Senior Center in Buffalo. Local seniors dined with Mayor Brown, whose efforts to enhance the quality of life for Buffalo seniors include the development of affordable senior housing, providing senior transportation, organizing various senior activities and a senior discount program, along with the establishment of a new a senior satellite center in the historic Broadway Market and sponsorship of community events, such as a picnic attended by 1,300 seniors in Buffalo’s Front Park in August 2014.

“Our senior citizens are the backbone of the City of Buffalo and I am proud to partner with Dunkin’ Donuts to further honor our seniors, giving them the respect and admiration they deserve,” said Mayor Brown.  “While Buffalo is entering a new era of opportunity, with over $5 billion in new economic development activity that’s creating over 12,000 new jobs, we need more companies like Dunkin’ Donuts to help us invest in the long-term health of those most in need of assistance, including our seniors. Today’s generous donation to the City of Buffalo has solidified Dunkin’ Donuts’ position as a true community partner and on behalf of city residents, we are grateful.”

Seniors can also take advantage of a 10-percent discount on all orders at participating Dunkin’ Donuts restaurants.

“Dunkin’ Donuts is proud to partner with Mayor Brown to support senior centers throughout the City of Buffalo,” said Doug Spolyar, Dunkin’ Donuts franchisee. “The seniors of today have spent decades working hard to make Buffalo the great city we know and love. We’re thrilled to show our gratitude and appreciation through this donation and by keeping Buffalo seniors running on Dunkin.”

“City employees are the lifeblood of Buffalo and we’re grateful for their efforts each and every day,” Spolyar said. “From fire fighters and police officers to the water authority, public works and more, we hope city workers take advantage of this offer and know that each cup of coffee is a thank you from Dunkin’ Donuts.”

Founded in 1950, Dunkin’ Donuts is America’s favorite all-day, everyday stop for coffee and baked goods. Dunkin’ Donuts is a market leader in the hot regular/decaf/flavored coffee, iced coffee, donut, bagel and muffin categories. Dunkin’ Donuts has earned the No. 1 ranking for customer loyalty in the coffee category by Brand Keys for eight years running. The company has nearly 11,000 restaurants in 33 countries worldwide. Based in Canton, Mass., Dunkin’ Donuts is part of the Dunkin’ Brands Group, Inc.