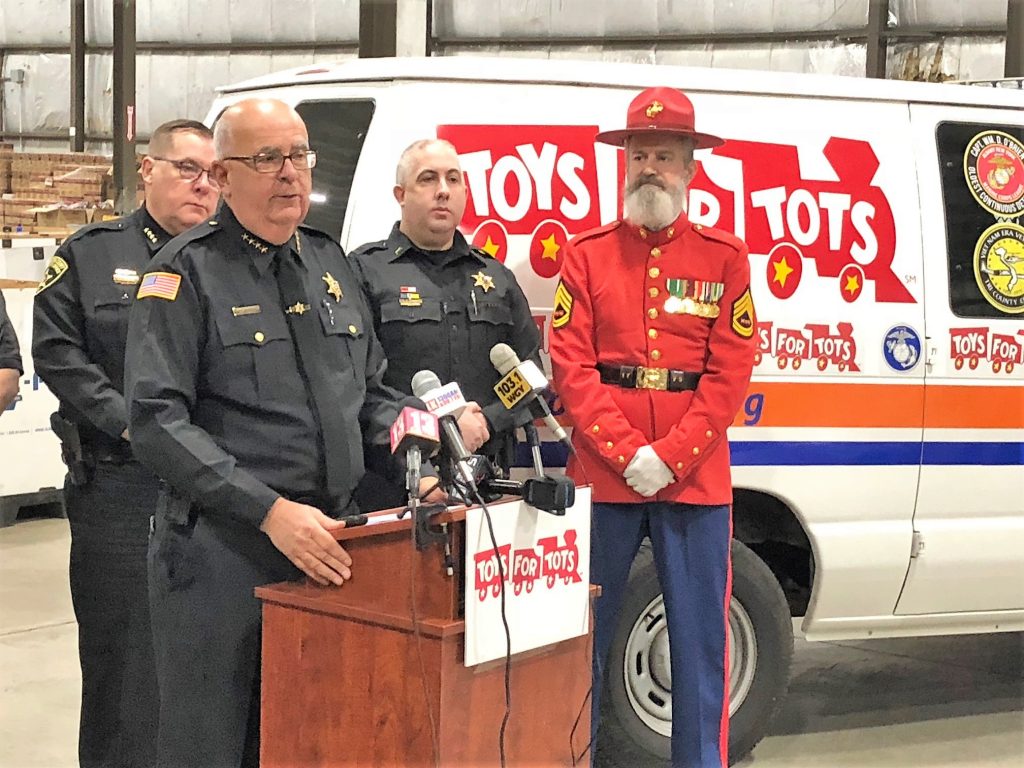 Clifton Park, NY; – The Capital Region Toys for Tots Foundation today announced its distribution plans for the 2018 holiday season, during which the annual program will deliver thousands of toys and winter coats to children in need throughout Upstate New York.

Since 2009, the annual holiday campaign has been bolstered by the support of Dunkin’, which has donated nearly $300,000 to the program over the past 10 years.

The journey will begin in Binghamton on Saturday, December 1 when the Marine Corps Reserves’ Dunkin’ Toys for Tots Train, powered by Norfolk Southern Railway, takes to the rails with stops in Bainbridge, Oneonta, Cobleskill and Delanson. Anchored by Dunkin’ and its Capital Region franchisees for the past decade, this year’s train is also supported by Norfolk Southern, Emery and Webb, the Western New York and Pennsylvania Railroad, Amtrak and Bennett and Eric Levin.

“Norfolk Southern is proud to participate in the 2018 Capital Region Toys for Tots Holiday Train,” said CEO Jim Squires. “As a leading transportation provider, we believe in giving back to communities where we operate, and programs such as Toys for Tots allow us to do just that. Really, we are giving back to our neighbors, because we not only work in these communities, we live there as well. I extend Norfolk Southern’s gratitude for the team effort that has moved this year’s train forward and to the United States Marine Corps, the Bennett Levin Family, and the volunteers who give tirelessly to make the season a little brighter.”

CDTA will also provide additional support by providing passenger buses to help transport community volunteers to Binghamton before picking them up at the final train stop in Delanson.

“CDTA is proud to support the Capital Region Toys for Tots and work with this great group of community partners,” said CDTA Chairwoman Georgeanna Nugent. “When we heard there were some additional needs this year, our employees happily stepped up and we look forward to brightening the holidays for countless children.”

The second leg of the trip will take place on Sunday, December 9 with the all-new Capital Region Toys for Toys Northern New York Sheriffs Coalition Road Train, powered by Dunkin’ and Upstate Transit of Saratoga. The convoy, comprised of six tractor trailers are carrying thousands of toys, will begin in Saratoga Springs before traveling up Interstate 87 with stops in Fort Edward, Ticonderoga, Lewis, Keeseville and Rouses Point.

“Once again the community came together to make sure we didn’t fail. The power of this community is so tremendous. I’m confident that together we can accomplish anything,” said Marine Gunnery Sgt. (Ret) Albert Roman, local coordinator of the Capital Region Toys for Tots campaign.

“I am honored to partner with Sheriffs Murphy, Cutting, and Favro to ensure the children of Northern New York experience the joys of the holiday season.  It was extremely exciting to be able to provide the support and coordination needed to allow the Marines and Capital Region Toys for Tots to complete their mission of delivering toys to these locations reaching as far as the Canadian Border,” said Saratoga County Sheriff Michael Zurlo.

Numerous local companies and organizations will donate the use of tractor trailers for the Sunday expedition, including Auto Solutions, Borwegen Trucking, Dunkin’, Freihofer’s, R.H. Weisheit Trucking and Roberts Towing and Recovery.

“Dunkin’ is thrilled to bring the spirit of the holidays to children in need by supporting the efforts of the Marines who spearhead the Toys for Tots campaign. We commend the Marines, local law enforcement and all others involved for their support of this critical holiday tradition,” said Eric Stensland, integrated marketing manager for Dunkin’. “We are honored to continue our decade of support and being a part of this extraordinary effort that has such a vital impact on families in our community.”

This year’s Toys for Tots collection drive is currently underway at more than 400 locations throughout the Capital Region, including more than 100 local and regional Dunkin’ restaurants, which serve as drop-off points for guests wishing to donate new, unwrapped toys. The Marines will work with more than 200 community agencies to distribute toys this holiday season and will be equipped to serve 200,000 children.

The official 2018 Capital Region Toys for Tots Foundation distribution schedule is as follows (all times are approximate):