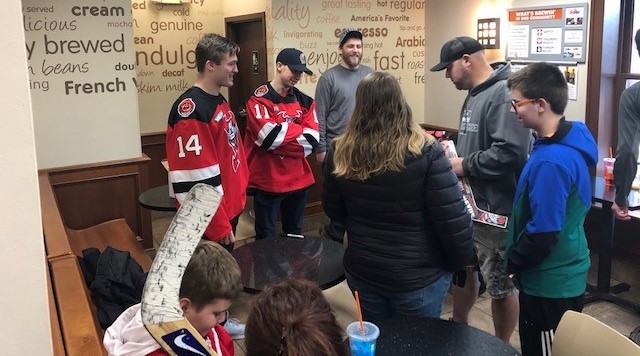 Binghamton Devils players Joey Anderson (left) and Brett Seney (right) visit with guests during the “Coffee with the Devils” event.

BINGHAMTON, NEW YORK; – Several players and the head coach of the Binghamton Devils made a special visit on Monday, January 6 to the Dunkin’ restaurant in Endwell, NY to celebrate the hockey season with fans during the “Coffee with the Devils” event.

The special Binghamton Devils player appearance is an extension of the partnership between Dunkin’ and the local hockey team. Dunkin’ is the official coffee of the Binghamton Devils and a proud supporter of local athletics.

During the appearance, the players and coach took pictures, signed autographs and enjoyed delicious Dunkin’ coffee and baked goods with fans to wrap-up the work day.

The “Coffee with the Devils” event is the second in a series of player visits at local Dunkin’ restaurants in the Binghamton community this season. The players and mascot will also meet with fans at a local Dunkin’ on Monday, February 3.