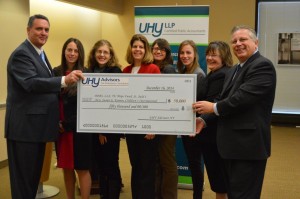 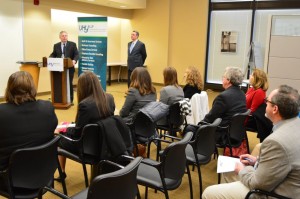 Albany, New York; – UHY Advisors NY, one of the nation’s top tax and business consulting firms, today announced it will commemorate its 50th anniversary by donating $50,000 to the New York chapters of national nonprofit organizations dedicated to fighting disease and improving the lives of children.

The donation is the result of a yearlong commitment to giving by UHY Advisors NY partners, managers and staff, whose charitable initiatives in 2014 included a “Casino Night” at 90 State Events in Albany and the inaugural UHY Cares Charity Golf Classic in Westchester, among other philanthropic endeavors in the Capital Region and New York City.

“Our Capital Region and New York City offices collaborated closely to celebrate 50 years of service by supporting organizations that have such a profound impact on so many lives,” said Michael Mahoney, President and CEO of UHY Advisors NY. “Our longevity is a testament to our employees, past and present, and we look forward to continuing our firm’s tradition of excellence established over the last half-century.”

“Fifty years ago, our firm established itself with a commitment to trust, credibility, and integrity to our community, clients and team members,” said Howard Foote, Managing Partner of the company’s Capital Region headquarters. “We’re proud to celebrate these principles by contributing to organizations that truly make a difference in our community.”

UHY Advisors NY, then known as UKW, formed in 1964 as a result of a merger between Capital Region natives Howard Kahn and Eli Werlin, Alice Blanchard and New York City native Sidney Urbach. The firm opened its first office at 40 Colvin Avenue in Albany with 17 employees.