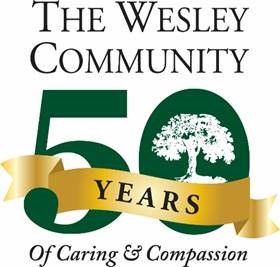 Presented by The Adirondack Trust Company, the evening is a tribute to Wesley’s 50th year as a vital nonprofit organization supporting seniors in the community. Since its founding, The Wesley Community has established itself as a long-term senior care community and has steadily grown into a continuum-of-care campus featuring independent and assisted living apartments, compassionate skilled nursing, home care and memory care services.

“The Wesley Community has been providing exceptional senior care and services for 50 years, and this year of ongoing celebrations has been a fitting way to recognize not only our rich history but also the people who have made it all possible,” said The Wesley Community CEO J. Brian Nealon.

“Adirondack Trust is proud to be the Presenting Sponsor of The Wesley’s Community’s 50th Anniversary Celebration,” said Adirondack Trust Company President and CEO Charles V. Wait, Jr. “We have long supported Wesley’s mission of caring for the elders of our community, as well as others in need. We look forward to many more years of Wesley serving this great community we all call home.”

Highlights of the occasion will include anecdotes from individuals who played an integral role in The Wesley Community’s rich history and the first look at a soon-to-be released commemorative book and video that chronicle the journey. The book was co-authored by Field Horne and Greg Dixon with design provided by David Clark Perry. The video is being produced by LOOK Media’s Jesse Jackson, Dayna Peck and Jack Hojohn.

Among the milestones that will be highlighted during the anniversary celebration are:

Tickets for the 50th Anniversary Celebration Dinner on Sept. 20 can be purchased for $175 per person. Reservations are required and can be made by phone at 518-691-1420 or at www.wesley50.org.

More details on each of the celebratory community events that have taken place throughout the year can be found at www.wesley50.org.

Upcoming public events include two viewings of The Wesley Community’s documentary, produced in recognition of the 50th anniversary, on Oct. 11 at 3:30 and 5:30 p.m. at SUNY Adirondack in Wilton. Admission is free of charge but advance reservations are required and can be made by calling 518-691-1420 or via email at [email protected]. The video will be released on The Wesley Community website after it premiers. The book is available for a donation online at www.wesley50.org.

About The Wesley Community

The Wesley Community is a 37-acre, not-for-profit agency in Saratoga Springs, NY, which serves the needs of the elderly, as well as active seniors, adults and pediatrics. Sponsored by United Methodist Health and Housing, Inc., The Wesley Community’s unique continuum of care community provides independent and assisted living for seniors, affordable independent senior housing, short-term rehabilitation and long-term care, as well as home care services and outpatient therapies available for people of all ages.