It’s a tried and true phrase – there’s strength in numbers, but never was that aphorism more pronounced than during the recent holiday season.

During the season of giving, Dunkin’ Donuts renewed its partnership with the United State Marines Corps Reserves Toys for Tots Foundation through its support of the Toys for Tots train, which is powered by Canadian Pacific and Amtrak. If you’re not familiar with this initiative, the Toys for Tots Train is truly an innovative endeavor. Celebrating a milestone 15th anniversary this past holiday season, the train, named in honor of Dunkin’ Donuts, makes its way through upstate New York and delivers toys, clothing and gifts to children and families in need across 12 communities. The train has become an annual rite of the holiday season, its arrival as anticipated and welcomed as the first snowfall.

But as recently as five years ago, the train, which is the foundation of the Toys for Tots program in the eastern and northern half of New York, nearly ground to a halt due to a lack of funding. That’s when Dunkin’ Donuts and its franchisees stepped forth with a contribution of $20,000 to insure that this annual tradition would continue uninterrupted. Today, that contribution has jumped to $30,000, an increase of 50%, to bring the grand total from Dunkin’ Donuts to $140,000 in support of the Toys for Tots Foundation over the span of five years. 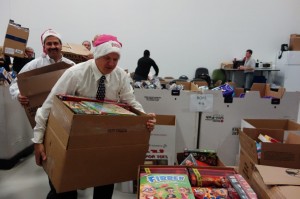 The financial largess that Dunkin’ Donuts brought to Toys for Tots is certainly undeniable, but perhaps more impactful is the power of its brand. Dunkin’ Donuts’ support helped to not only stabilize the finances of the Toys for Tots program locally, but also generated thousands of dollars in earned media, or favorable publicity for the program, which, in turn, made the Toys for Tots train an attractive sponsorship opportunity for other leading brands. 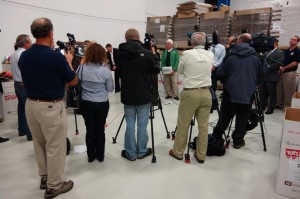 Today, companies like Wal-Mart and Integra Networks have joined the party with thousands of dollars of cash and in-kind contributions  that will enable the program to service more families and children in need than ever before.

For sure, Dunkin’ Donuts, Wal-Mart and Integra Networks benefit from their association with a credible and well-respected non-profit organization like the Toys for Tots Foundation, which enables their associates and employees to feel good about the work they do for their company. The attendant publicity and promotional opportunities bolster the reputation and burnish the image of companies in generating community goodwill. But the bottom line is that not all companies choose to reinvest their revenues in their communities. Those that do, like Dunkin’ Donuts, Wal-Mart and Integra Networks, understand the true spirit of giving and the true power of partnerships.

A partnership of equal note late last year featured Hannaford Supermarkets, CDPHP and the Capital District YMCA, which combined to roll out a first of its kind joint initiative in the Capital Region with the introduction of the Healthy Living Center. Here was an example of two for-profit companies teaming up with a well-known non-profit organization, the Capital District YMCA, to design, build and manage a health and wellness center open to residents of the local community. Residents may utilize the equipment without charge prior to filling their weekly shopping basket. 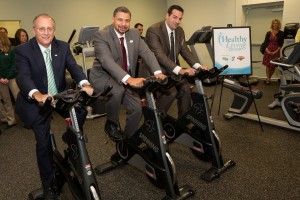 During the remodel of its Central Avenue supermarket in Albany, Hannaford partnered with the Capital District YMCA to transform more than 5,000 square feet of store space into a wellness center with state of the art equipment and instructors that would rival many a fitness center.  Hannaford supplemented the offerings with registered dieticians to assist visitors with information about nutrition and dietary needs, while CDPHP offers on-site counseling with staff experts to discuss access to health care and to answer the many inquiries that undoubtedly accompany the opening of the health care exchanges in New York State. Through their partnership, each of these three leading brands marshaled resources to develop a truly innovative model for consumers which resulted in unprecedented access to a community wellness center.

While each of the participating organizations clearly hopes to benefit from an increase in consumer engagement, their joint affiliation has had a widespread impact. In this case, the mutually beneficial arrangement extends to numerous stakeholders – consumers of health care, fitness fans, wellness devotees, and everyday shoppers -in other words, the community at large. Indeed, the power of the partnership has never been more evident than just down the aisle from the milk and dairy department of your local supermarket.