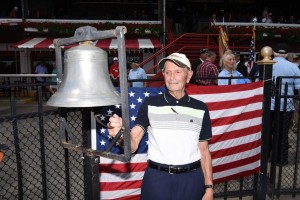 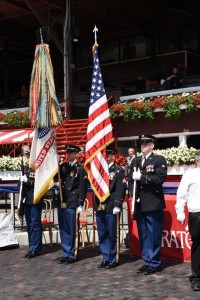 Several generations of veterans and service members gathered in the winner’s circle for the day’s third race named in honor of Military Appreciation Day. Prior to the race, 94-year-old World War II veteran Gary Iorio of Bellmore, NY rang the bell in the winner’s circle seven times at 17 minutes to post, a longstanding tradition at Saratoga.

Performers from the USO Show Troupe, an American tradition that entertains approximately 600,000 service members and their families annually worldwide, greeted guests with patriotic songs as they arrived at the Clubhouse entrance. Local acapella group Racing City Chorus greeted guests at the Union Avenue gates. Additionally, a U.S. Marine Corps F-150 vehicle was positioned outside the Clubhouse gates throughout the afternoon.

NYRA paid tribute to its service member and veteran employees with a special ceremony in the winner’s circle during the National Anthem, which was performed by the Racing City Chorus. The National Anthem was accompanied by a Presentation of Colors from cadets of the United States Military Academy at West Point.

The Racing City Chorus continued to entertain guests on the track apron with a patriotic medley following the day’s third race. The USO Show Troupe came trackside for a special performance on the apron following the day’s fifth race. Additionally, both groups performed at the Berkshire Bank Saratoga Pavilion throughout the afternoon.

The Community Outreach Booth hosted the Jewish War Veterans Post 36 of Saratoga Springs, a non-profit organization which brings together military veterans of all eras in the greater Saratoga Jewish community to offer support on issues relating to veterans.