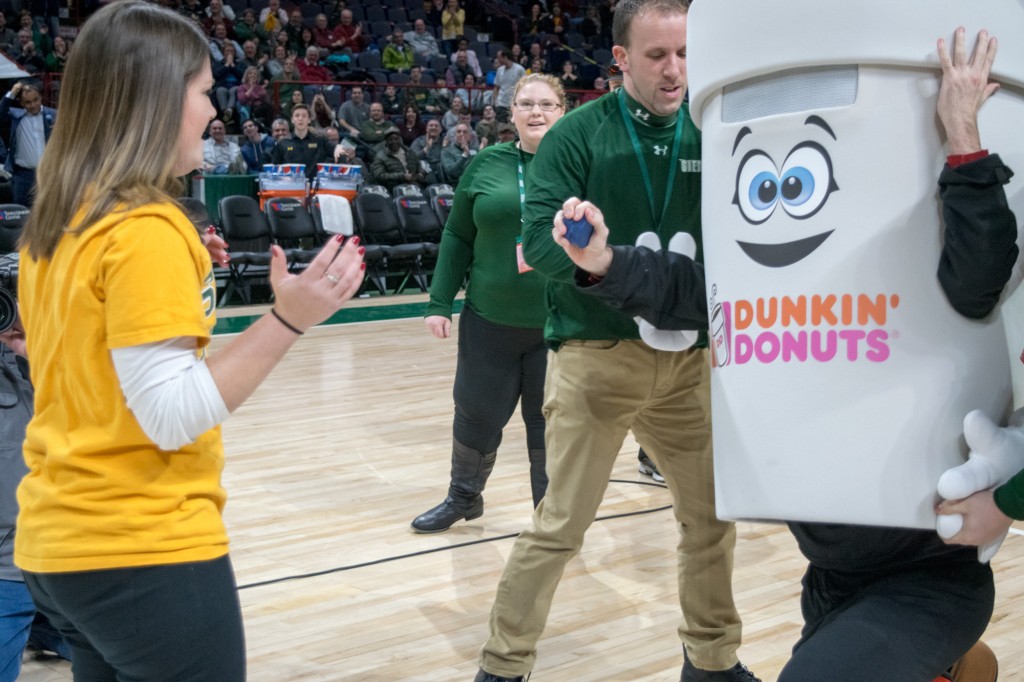 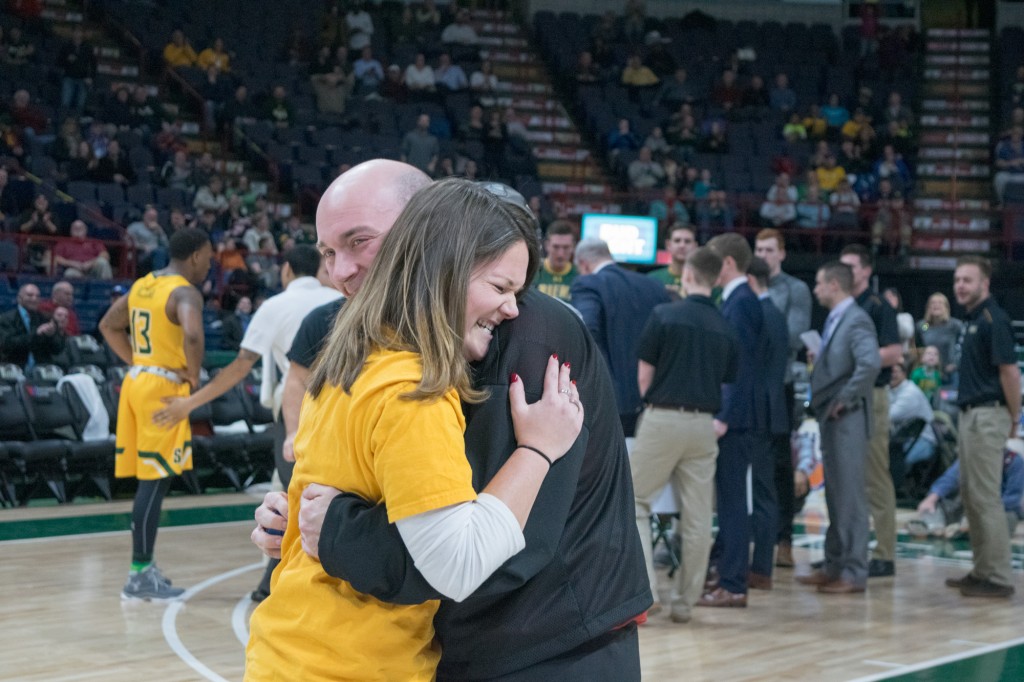 ALBANY, NEW YORK –  A Capital Region woman and Siena College basketball fan had a slam Dunkin’ Thursday night after she amazingly hit a shot from half court during a Dunkin’ Donuts promotion and then received a surprise marriage proposal from her boyfriend disguised as a Dunkin’ Donuts mascot.

Steve Duckett, 31, of Queensbury, proposed to Erin Tobin, 30, of Rensselaer, on the court during a Siena College men’s basketball game at the Times Union Center in Albany, NY. Duckett planned the proposal while attending Siena basketball games during the 2016-‘17 season, deciding to add his own personal twist to the Dunkin’ Donuts regular in-game promotion.

With the aid of Dunkin’ Donuts and Siena Athletics, Duckett disguised himself as “Cuppie”, a Dunkin’ Donuts mascot, and accompanied the unsuspecting Tobin onto the court to attempt a half-court shot for a chance to win a $500 Dunkin’ Donuts gift card. After remarkably banking the one-handed heave in from half court, Tobin turned around to see “Cuppie” on one knee who was soon revealed to be her boyfriend disguised in the mascot costume.

“I was jumping up and down after hitting the shot since my brother said he’d give me 50 dollars if I even hit the rim,” said a shocked Tobin. “And then I turn around expecting a gift card from Dunkin’ Donuts and there he was on his knees and I didn’t have any words.”

“Oh, no! And then I said to myself, of course she would hit the shot.”

Duckett planned the engagement ceremony in partnership with Siena Athletics to take place during a men’s basketball game in honor of Tobin’s alma mater and her loyalty to the Saints basketball program. Tobin, a 2008 graduate of Siena College, is a men’s basketball season ticket holder.

In celebration of their engagement, Dunkin’ Donuts provided the couple and their families with a complimentary suite at the Times Union Center to bear witness to the proposal.

For more information about the Siena Saints and the 2016-17 men’s and women’s basketball season, visit www.sienasaints.com.

Founded in 1950, Dunkin’ Donuts is America’s favorite all-day, everyday stop for coffee and baked goods. Dunkin’ Donuts is a market leader in the hot regular/decaf/flavored coffee, iced coffee, donut, bagel and muffin categories. Dunkin’ Donuts has earned the No. 1 ranking for customer loyalty in the coffee category by Brand Keys for 11 years running. The company has more than 12,200 restaurants in 45 countries worldwide. Based in Canton, Mass., Dunkin’ Donuts is part of the Dunkin’ Brands Group, Inc. (Nasdaq: DNKN) family of companies. For more information, visit www.DunkinDonuts.com.