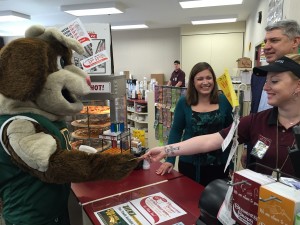 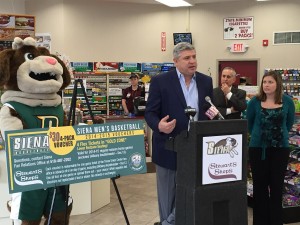 Four-ticket flex pack offers savings of up to 50 percent to men’s basketball regular season games; available for first-time ever at Stewart’s Shops

For the first time ever, Siena fans will have the opportunity to purchase a four-ticket flex pack at 135 Stewart’s Shops locations throughout the Capital District. Each flex pack will be available for $30 and will include four vouchers that may be redeemed for four tickets to Siena men’s basketball home games at the Times Union Center during the upcoming regular season. The exclusive rate provides fans with a savings of up to 50 percent.

The four-ticket flex pack may be redeemed in any quantity, giving fans the flexibility to use all four tickets during one game or spread out over multiple games. The flex packs will be available at Stewart’s Shops in Albany, Rensselaer, Saratoga and Schenectady counties beginning Monday, November 10 through Saturday, January 31.

“Siena has the best fans in the country and this exciting new initiative in partnership with Stewart’s Shops will make it easier than ever for Capital Region residents to cheer for our student athletes in green and gold,” said Siena College Director of Athletics John D’Argenio. “We encourage fans to take advantage of these exclusive savings and look forward to another season of thrilling action on the court.”

“Stewart’s Shops has a long history of supporting our local sports teams and we’re thrilled to offer flex packs for the upcoming Siena basketball season,” said Stewart’s Shops President Gary Dake. “These tickets are great for both new and longtime Saints fans and will make a perfect gift for any sports fan as we look towards the holiday season. We are confident that this new partnership with Siena Athletics will benefit both their fans and our customers.”

Flex pack vouchers are redeemable for tickets in the Gold Zone to all 2014-15 men’s basketball regular season home games at the Times Union Center (excluding the University at Albany on December 13). The Gold Zone section is located on the lower level behind each basket. Vouchers must be redeemed at the Times Union Center Box Office for tickets in advance or on the day of any game, while supplies last, subject to availability.

The 2014-15 Siena men’s basketball season tips off on Friday, November 14 at Massachusetts, with the first home game scheduled for Monday, November 17 against Vermont. The home slate runs through Saturday, February 21 when Siena hosts Manhattan and the regular season concludes Sunday, March 1 at Monmouth. For more information about flex packs available exclusively at Stewart’s Shops, contact the Siena Fan Relations Office at (518) 487-2202 or log onto www.SienaSaints.com.

About Siena Athletics
Siena College is a learning community advancing the ideals of a liberal arts education, rooted in its identity as a Franciscan and Catholic institution. The College is a member of the Metro Atlantic Athletic Conference and supports 18 sports that compete at the NCAA Division I level. Visit www.SienaSaints.com for all the latest news, information and results for Siena athletics.

Founded in 1945, Stewart’s Shops is an employee and family-owned convenience store chain based in Saratoga Springs, NY. Stewart’s is known for offering milk, ice cream, coffee, food to go, gasoline, and other convenience items. This year the company will donate $2.5 million to local non-profits. Recognizing that Stewart’s is the source of their philanthropic dollars, the Dake family contributes an equivalent amount to local charities annually. Visit www.stewartsshops.com for more Stewart’s news and specials.