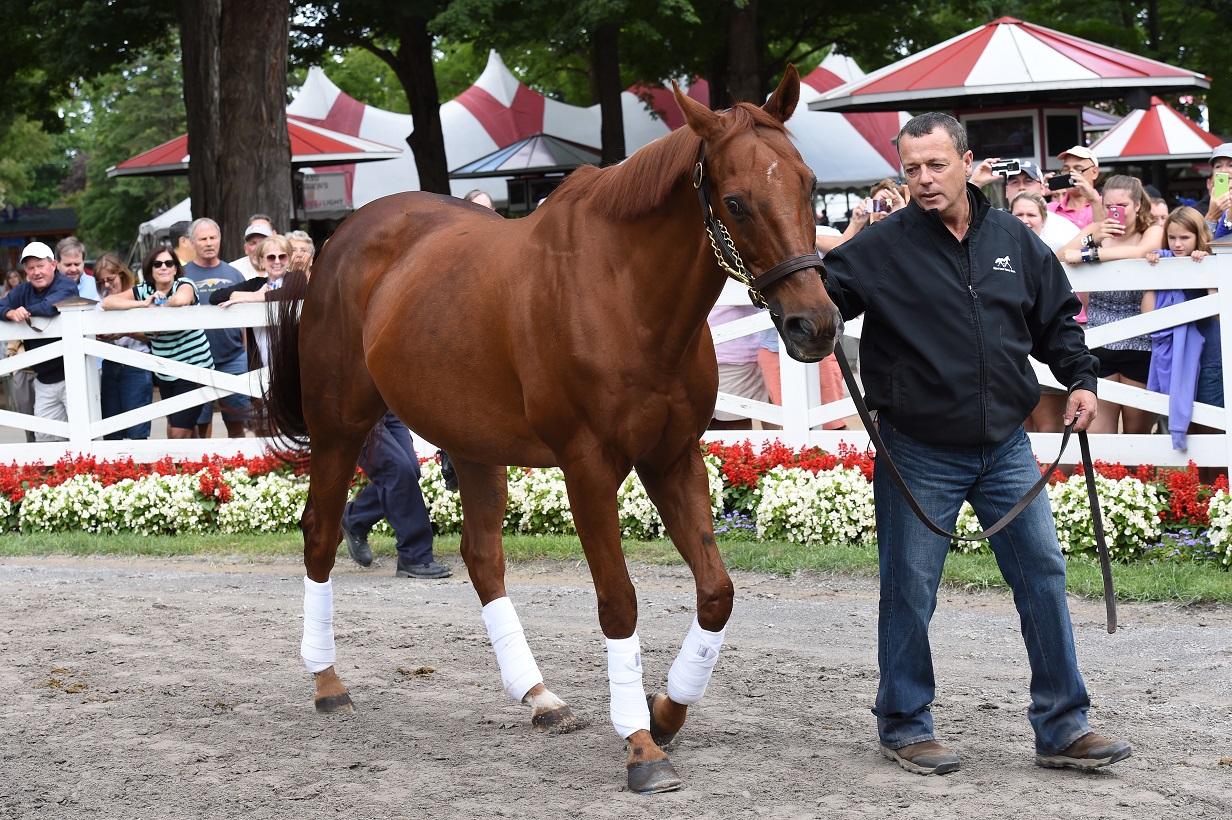 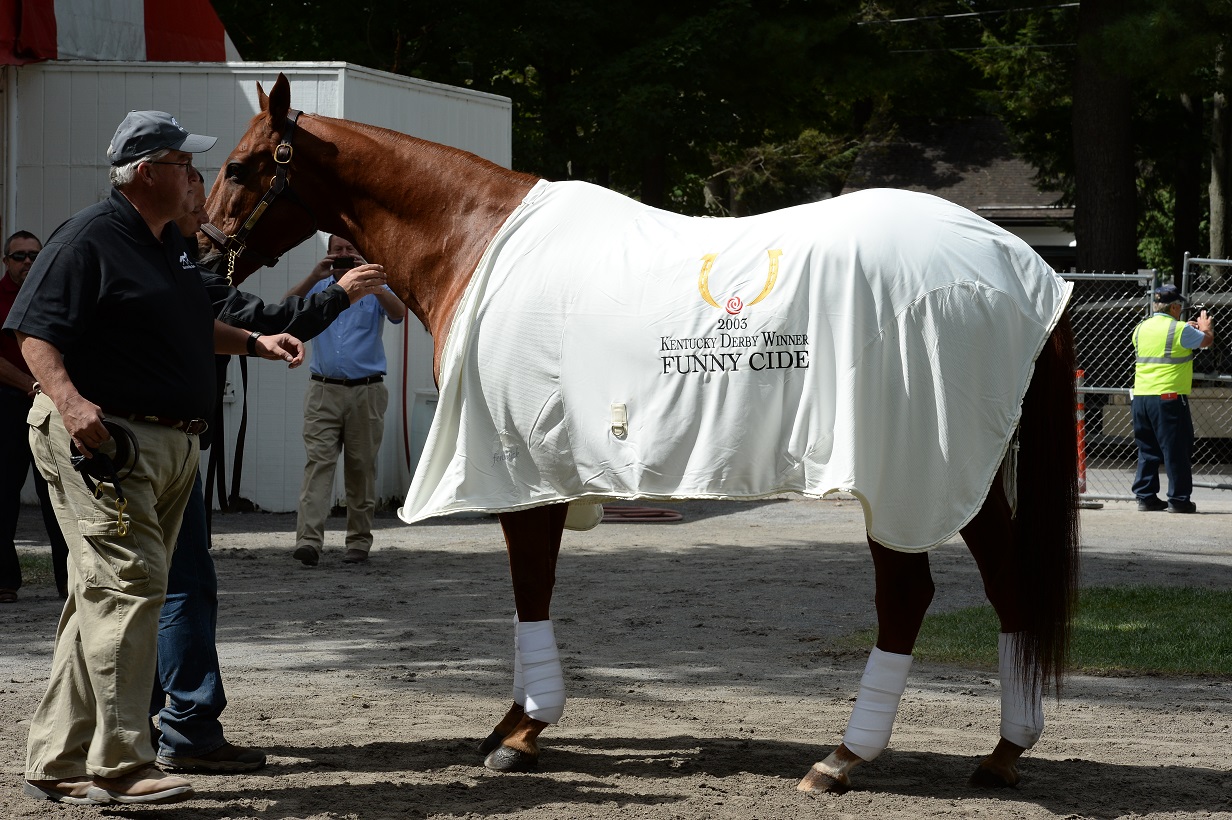 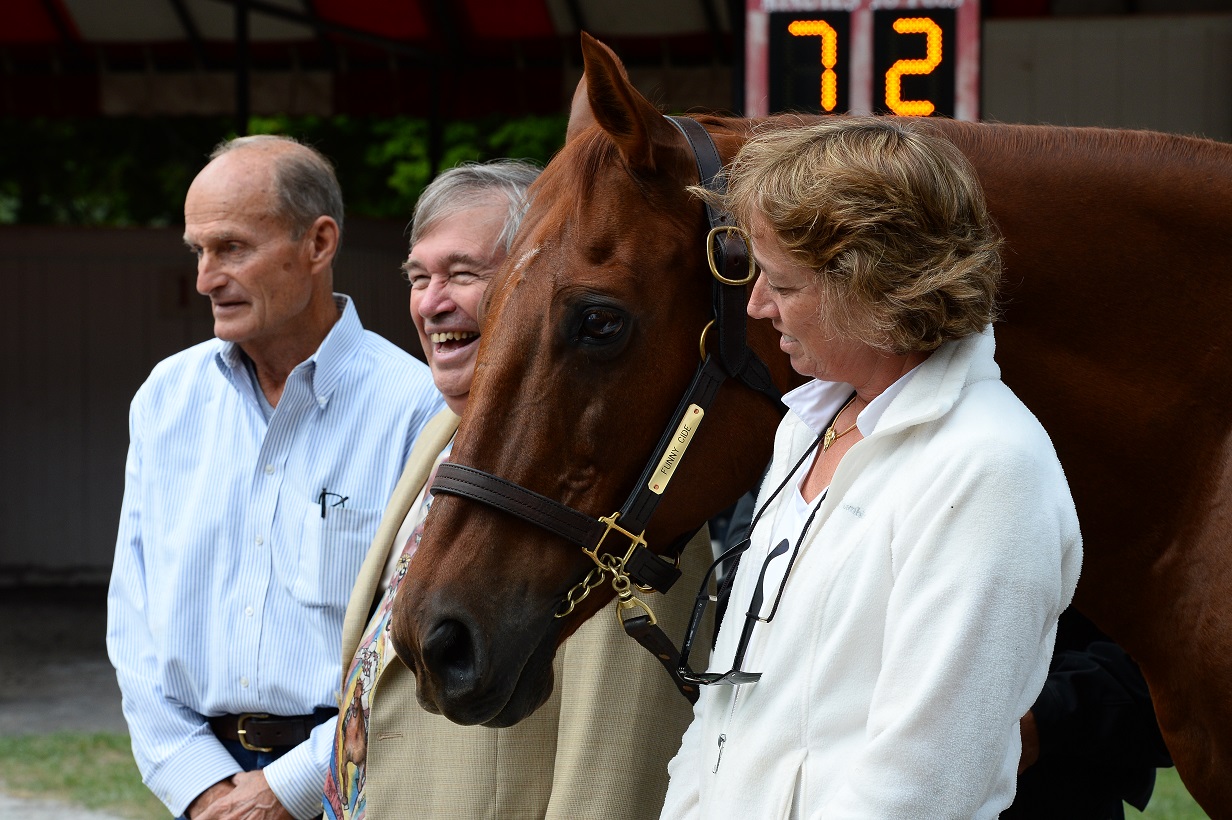 Hundreds of fans gathered to watch the 2003 Eclipse Award 3-year-old male champion parade in the paddock. Funny Cide, owned by Jack Knowlton of Sackatoga Stable and foaled at McMahon of Saratoga thoroughbreds farm, was the first New York-bred to win the Kentucky Derby when he accomplished the feat in 2003. He went on to win the second leg of the Triple Crown in 2003 and captured the 2004 Jockey Club Gold Cup at Belmont Park. He retired in 2009 and currently resides at the Kentucky Horse Park.

The appearance of Funny Cide comes one day before New York Showcase Day at Saratoga Race Course on Friday, August 28. The popular state-bred card will include six stakes, including the eponymously named $200,000 Funny Cide for 2-year-olds at 6 ½ furlongs and the $250,000 Albany for 3-year-olds going 1 1/8 miles.

“We were thrilled to welcome the return of one of New York’s most beloved and successful home-grown thoroughbreds on the eve of New York Showcase Day at Saratoga,” said NYRA CEO and President Chris Kay. “In 2014 we inaugurated Saratoga Showcase Day and it was incredibly well-received by fans and horseplayers. This year we have reserved one of our most high-profile days on the eve of the Travers to showcase the outstanding equine talent that is being produced right here in New York.”

Fans who attend New York Showcase Day on Friday and donate three canned or non-perishable items to the Saratoga County Economic Opportunity Council will receive a free commemorative Funny Cide poster. Donations will be collected at the Community Outreach Booth, which is located next to the Jockey Silks Room Porch and across from the new Saratoga Walk of Fame. Suggested donation items include shampoo, conditioner, toothpaste, pasta, peanut butter, cereal, rice, soup and canned vegetables.

Friday will also feature the induction of prominent owners Ogden Mills “Dinny” Phipps of Phipps Stable and Marylou Whitney of Marylou Whitney Stables into the Saratoga Race Course Walk of Fame. The honorees will unveil their plaques during the New York Racing Association’s annual Red Jacket Ceremony, scheduled for 12:15 p.m. at the winner’s circle.

Tickets for Travers Day, Saturday, August 29, are sold out and are not available for purchase at Saratoga Race Course, but fans can watch and wager on a record seven graded stakes on Travers Day with a NYRA wagering account available online at nyra.com.

Those without tickets to the sold-out Travers are encouraged to visit 2015SaratogaTravers.com for information about Travers Day viewing parties throughout Saratoga.