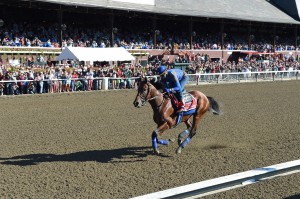 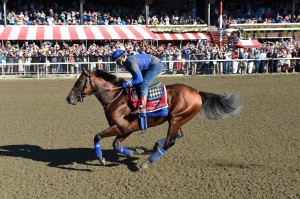 SARATOGA SPRINGS, N.Y. – The New York Racing Association, Inc. today welcomed an estimated crowd of 15,000 racing fans from the Capital Region and beyond to watch American Pharoah work on the main track at Saratoga Race Course – one day before the champion colt competes in front of a sold-out paid crowd of 50,000 fans during the 146th running of the Grade 1, $1.6 million Travers on Saturday, August 29.

Travers contenders Frammento, Keen Ice, Smart Transition and Texas Red also went out on the main track during the exclusive window for Travers runners between 8:45 a.m. and 9 a.m. on Friday. Frosted galloped on the main track shortly after 6 a.m.

“Travers Eve is always an exciting day at Saratoga Race Course and the appearance of American Pharoah only adds to the anticipation as an entire generation welcomes for the first time a Triple Crown winner to Saratoga,” said NYRA CEO and President Chris Kay. “While Travers Day is completely sold-out, Friday morning provided racing fans with the perfect opportunity to see a champion on the track in this historic and beautiful setting.”

Fans enjoyed the traditional breakfast on the lower porch and in the At the Rail Tent throughout the morning, as well as concessions which were open throughout the facility to accommodate additional guests.

All Travers Day tickets are sold out. Fans are specifically advised not to travel to Saratoga Race Course on August 29 without tickets purchased in advance. The sell-out Travers Day follows the announcement of a paid attendance cap of 50,000 attendees in an effort to ensure the safety and enjoyment of all fans.

Clubhouse and grandstand season passes are valid and will be accepted on Travers Day. Fans possessing season passes are directed to show their pass at any of the Spa’s three gates as they normally would on all other race days.

Gates open at 7 a.m. for ticketed patrons on Travers Day with a special first post time of 11:45 a.m. The Travers will go to post at 5:46 p.m. and will be broadcast on NBC as part of a two-hour live broadcast beginning at 4 p.m.

Those without tickets to the sold-out Travers are encouraged to visit 2015SaratogaTravers.com for information about Travers Day viewing parties throughout Saratoga.