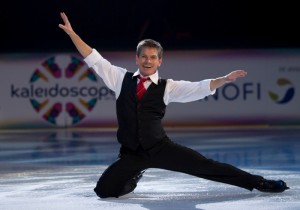 Wylie’s appearance coincides with Hannaford Free Skate Rental Fridays. Each Friday of the season, skate rentals at the Empire State Plaza ice rink are free, courtesy of Hannaford Supermarkets. Admission to the ice rink is free and open to the public.

Wylie will conduct a brief figure skating demonstration before inviting guests to join him on the rink from 4 to 5 p.m. A meet-and-greet offering the opportunity for free photos and autographs will be held from 5 to 6 p.m.

“Hannaford is thrilled to welcome Olympian Paul Wylie to the Empire State Plaza ice rink. His grace and skill will undoubtedly inspire another generation of figure skaters to enjoy this timeless winter activity,” said Hannaford Supermarkets Community Relations Specialist Molly Tarleton. “We look forward to welcoming Capital Region families onto the ice to take advantage of this amazing opportunity to join a true Olympian on the rink.”

Wylie is best known for winning the silver medal in men’s singles figure skating at the 1992 Olympic Games. After the Olympics, Wylie went on to win The World Professional and U.S. Open Professional Championships in 1993 and is a four-time winner of both the Masters Miko Professional Championships in Paris and The World Challenge of Champions. Wylie also co-headlined the Stars On Ice tour with Scott Hamilton and Kristi Yamaguchi. Wylie toured with Stars on Ice from 1992 to 1998 before retiring.