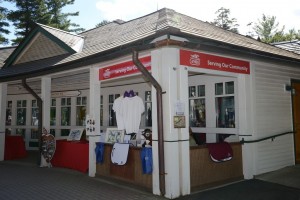 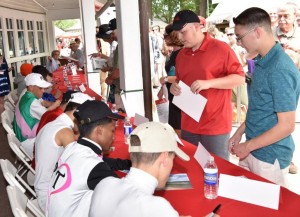 SARATOGA SPRINGS, NY – The New York Racing Association, Inc. (NYRA) hosted nearly 50 local non-profit organizations, schools and PTAs at Saratoga Race Course during the 2016 season. The focus of these efforts took place at the Community Outreach Booth, adjacent to the Jockey Silks Room across from the Walk of Fame, and at the Saratoga Pavilion throughout the 40-day summer meet.

“The New York Racing Association strongly believes in the importance of community partnerships, and we were pleased to welcome a diverse array of non-profit organizations from across the region to Saratoga Race Course to help further their marketing, outreach and fundraising efforts,” said NYRA CEO and President Chris Kay. “Through our Community Outreach Booth, we are able to shine a bright light on one non-profit per day to help raise awareness about the good work and services each provides to our community. We were also pleased to assist local schools and PTAs to raise funds and to reconnect with their members each Monday during our Berkshire Bank Family series in the Saratoga Pavilion.”

Participating non-profit organizations during the 2016 season included the Backstretch Employee Service Team (BEST), which provides support to the men and women employed to take care of the horses in the barn area. BEST engaged fans about its mission on multiple days during the meet, including Travers Day, Saturday, August 27.

“Our day (at the Community Outreach Booth) was amazing. Everyone that stopped by was very kind and giving,” said Backstretch Employee Service Team Saratoga Program Director Nancy Underwood. “Our mission is to share with the community the impact that these backstretch workers have on the racing industry. We came to spread the word about our organization, and everyone has been so good to us.”

Several thoroughbred aftercare organizations were present at the Community Outreach Booth in an effort to spread awareness about their efforts, including the Thoroughbred Retirement Foundation; Akindale Thoroughbred Rescue; Thoroughbred Aftercare Alliance; and ReRun, Inc.

“Our experience has been fantastic. There are so many individuals who are intrigued about what we do and what we have to offer,” said Thoroughbred Aftercare Alliance Marketing Coordinator Danielle Nichter. “Our goal was to spread awareness as well as raise money for the organization, and we definitely feel like we have achieved that.”

NYRA hosted the Saratoga Performing Arts Center (SPAC) at the Community Outreach Booth on Opening Day, Friday, July 22, in honor of its 50th anniversary season, and again on Wednesday, August 10, during which SPAC paid tribute to its collaborative partnership with the New York Racing Association by hosting its own “TRACK & SPAC” event with the Philadelphia Orchestra.

“We had a wonderful day here. The community booth is something non-profits are looking for at the track, and it’s a great thing that Saratoga does,” said Denise Managault of Dyer-Phelps. “This is our second year here, and we were happy Kendrick was able to join us to help lift donations, which we appreciated very much. We had a great time today.”

Other featured fundraising initiatives this season included a canned food drive to benefit the Saratoga County Economic Opportunity Council (EOC) on Travers Eve, Friday, August 26. The Saratoga County EOC is a community action agency which supports the development of healthy families through various programs, including an emergency food pantry and community lunch program.

“The Saratoga County EOC would like to thank NYRA for the opportunity to host another successful food drive, resulting from the generosity of the thousands of fans who visit Saratoga Race Course,” said Lillian McCarthy, director of community services for Saratoga County EOC. “Saratoga Race Course is a special place and to have the ability to generate awareness about our community’s needs while collecting items for our efforts is tremendous.”

Additionally, seven area schools had the opportunity to raise funds during Berkshire Bank Family Mondays. Each week within the Saratoga Pavilion, presented by Time Warner Cable News, the schools and PTAs raised funds by overseeing a designated activity which carried a suggested donation. Funds raised were supplemented with additional grants by NYRA and Berkshire Bank.

“This event gives us the ability to raise significant funds in a short amount of time. It’s also a great way to meet up with families and friends over the summer,” said Liz Vitale of Brown School. “What fun it is to spend a day at Saratoga while we raise meaningful funds for Brown School. We thank the New York Racing Association and Berkshire Bank for this opportunity and are excited to put the money we raise today to good use to support our programming.”