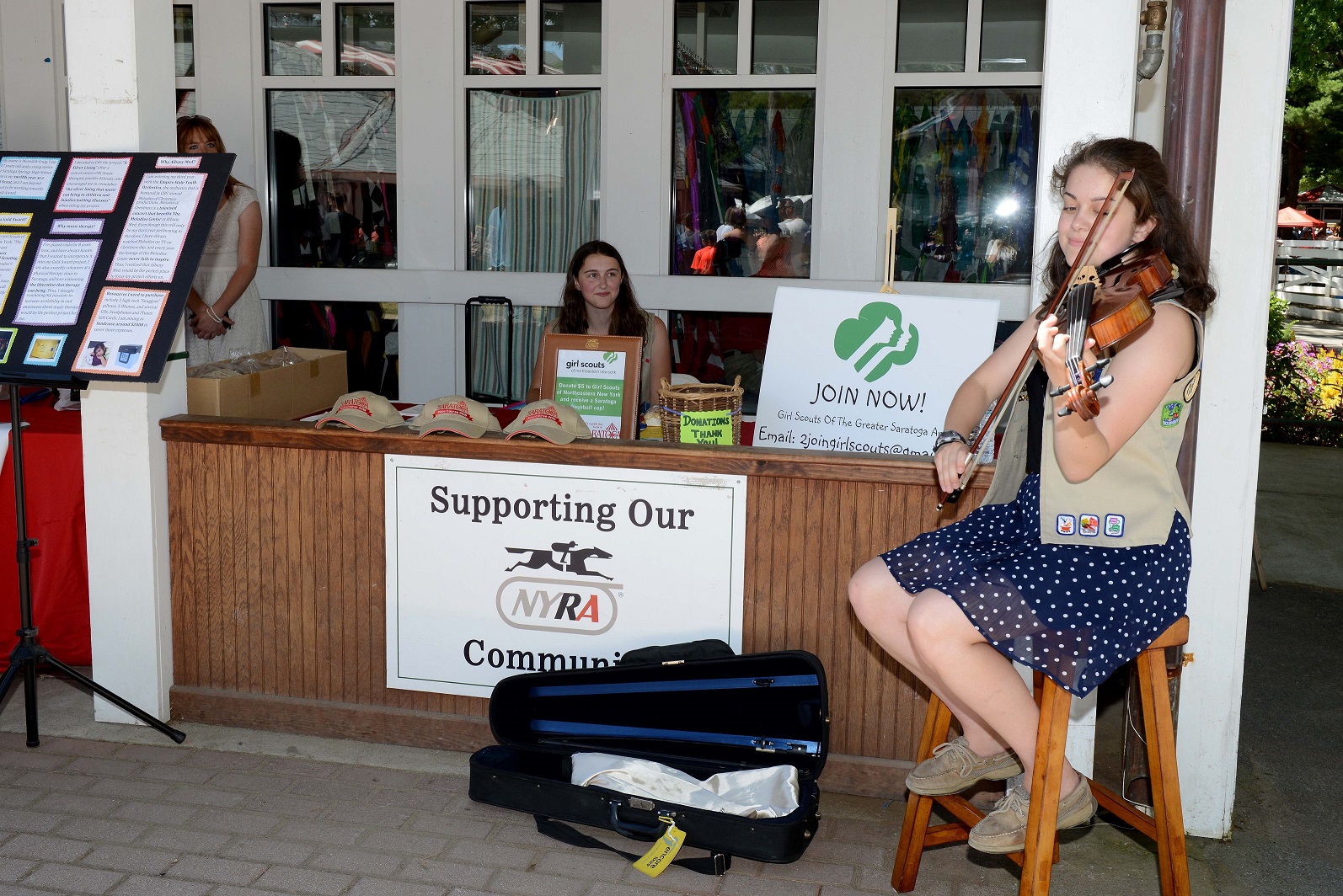 SARATOGA SPRINGS, NY – As the 2015 summer meet at Saratoga Race Course approaches the midway mark, the New York Racing Association has hosted 13 local non-profit organizations at its Community Outreach Booth, two of which have appeared twice for a total of 15 days featuring non-profits during the first 16 days of the meet.*

The Community Outreach Booth, which is located nearby the all-new Saratoga Walk of Fame and adjacent to the Jockey Silks Room Porch, provides local non-profit organizations with the opportunity to interact with the thousands of guests who visit Saratoga Race Course each day, share information about their work and host various innovative fundraising initiatives.

Additionally, each participating non-profit organization is the subject of a full-page profile in the corresponding day’s Post Parade program, and is also highlighted on the video boards throughout the day.

“The NYRA Community Outreach Booth is designed to provide our local non-profit partners with the chance to generate exposure about their efforts while also providing track visitors with a chance to contribute to meaningful causes. With only one non-profit represented each day, the booth provides an excellent opportunity to shine a spotlight on that day’s participating organization,” said New York Racing Association CEO and President Chris Kay. “We are thrilled to have so many non-profit partners joining us this year and we hope their exclusive day at Saratoga Race Course will support their ongoing work.”

The Community Outreach Booth hosted on Monday, August 10 one of the most iconic championship trophies in sports, the National Hockey League’s Stanley Cup, as part of a fundraising effort to benefit the Double H Ranch. The Double H operates a year-round camp in Lake Luzerne, NY, dedicated to providing specialized programs and support for children and their families dealing with life-threatening illnesses.

“The Double H Ranch is really excited about this special opportunity. To see the number of people here to support us and have their picture taken with the Stanley Cup is just amazing,” said Double H Ranch Director of Development Eileen Nash. “All of our children attend camp completely free of charge, so it’s really important for us to have community support. The Community Outreach Booth has been amazing. NYRA made this a turnkey process. We couldn’t be more appreciative.”

The Girl Scouts of Northeastern New York also had a successful day at the Community Outreach Booth on Sunday, August 2. Throughout the afternoon, the Girl Scouts generated hundreds of dollars by offering fans a limited number of Saratoga baseball caps with a $5 donation.

“The girls are having a great time. They’re really appreciative of how NYRA has given them the opportunity to raise money. Fundraising is going very, very well. A lot of people are flocking here and we’re grateful for that,” said Roseanne Craig during the day’s event. “These girls are working on their gold award project, the highest award for girl scouts. They have had a wonderful day learning about racing and the opportunities for women in racing. This has been a terrific opportunity for them and I’m sure they’ll remember it for a very long time.”

The Watervliet Civic Center, which is celebrating its 69th anniversary in 2015, also had the opportunity to generate funds for its day camp for local youth through the sale of Saratoga baseball caps, which were provided courtesy of NYRA, during the organization’s appearance at the Community Outreach Booth on Monday, August 3.

“Today has been an outstanding day and we’ve had the opportunity to interface with so many customers. They’ve been very responsive to the sale of baseball caps and there’s a lot of demand. It appears we’ve been quite successful. We’ve sold 150 hats in a race and a half,” said Watervliet Civic Center Acting President Tom Swimm. “We’re very grateful for the opportunity. We are a true charity and have to raise every dollar we bring to meet our budget.”

One of the more creative fundraising efforts employed at the Community Outreach Booth this season was from well-known Saratoga Springs-based men’s singing group Racing City Chorus, which performed barbershop style songs for track guests in return for donations as part of the Saratoga Centennial Day celebration on Wednesday, August 5.

“What a fabulous day, we had a great day,” said Jerry Crouth, who has performed with the Racing City Chorus for more than 20 years. “It was very successful from a fundraising standpoint, but even more so from the amount of publicity that we got for our organization. We couldn’t have imagined any better way to generate exposure for the Racing City Chorus than performing at the track on Centennial Day before so many thousands of fans.”

In conjunction with the 88th running of the Grade 1, $1.25 million Whitney on Saturday, August 8, NYRA welcomed the Capital Region chapter of the U.S. Marine Corps Reserve Toys for Tots Foundation to the Community Outreach Booth. U.S. Marines collected toys and hundreds of dollars in donations for its upcoming annual holiday toy drive throughout the afternoon.

On Friday, August 28, the eve of the 146th running of the Travers, the Community Outreach Booth will host a food drive to benefit the Saratoga Economic Opportunity Council, Inc. (EOC). Guests who donate three non-perishable food items to the Saratoga County EOC during the food drive will receive a free Saratoga giveaway.

“It means a great deal to us at the Saratoga EOC to receive the opportunity from NYRA to share our mission with the thousands of fans who visit Saratoga Race Course through the Community Outreach Booth. Saratoga is a special place and to have the ability to generate awareness about our community’s needs while raising funds for our efforts in such a popular and well-attended sports venue is tremendous,” said Saratoga County EOC Community Services Program Director Lillian McCarthy. “The Community Outreach Booth is the ideal vehicle to get our message out to the public and we look forward to giving track visitors a chance to give back to those in need in our surrounding communities.”

On Friday, September 4, a total of five thoroughbred aftercare charities will appear at the Community Outreach Booth as part of their ongoing partnership for the sixth annual Run for the Horses 5K, which will be held the following day at the Saratoga Spa State Park. Each of the organizations which benefit from the road race will have representatives at the Community Outreach Booth, including ACCT Naturally, Heading for Home, Old Friends at Cabin Creek, ReRun, Inc., and the Thoroughbred Retirement Foundation.

Other non-profit organizations which have participated at the Community Outreach Booth during the 2015 season include: Thoroughbred Retirement Foundation, Habitat for Humanity, Christie’s Heartoberfest, Junior League of Schenectady and Saratoga Counties, Knights of Columbus, Permanently Disabled Jockeys Fund, United Way of the Capital Region, and Troy Boys & Girls Club.

Another new charitable initiative offered by NYRA during the 2015 meet provides local schools, PTAs and non-profit organizations with the opportunity to fundraise for their operations during Berkshire Bank Family Mondays. The featured organization for the first Monday of the season was Skano Elementary School, part of the Shenendehowa Central School District in Clifton Park. The school raised funds throughout the afternoon, which was supplemented with additional grants by NYRA and Berkshire Bank.

“Last year we spent a lot of money (at a park) to have a picnic and bring everyone together during the summer and this year we’re raising money (at Saratoga Race Course), we’re bringing in money to get people together so that’s a really good benefit,” said Liz Coleman, president of the Skano Elementary PTA. “It’s a good chance to see friends you normally wouldn’t see over the summer, get together to support Skano and have some fun. We are grateful to all those who have contributed to make this possible for us.”

As part of its commitment to the community, NYRA supports non-profit organizations on local, state, and national levels though fundraisers, donations and awareness campaigns. In 2014, NYRA donated more than $1 million to non-profit organizations, including the Backstretch Employee Service Team, National Museum of Racing and Hall of Fame, Permanently Disabled Jockeys Fund, Breast Cancer Research Foundation, Saratoga Hospital, the Saratoga Springs Preservation Foundation and Toys for Tots Foundation, amongst others. To learn more about NYRA’s community initiatives, visit www.nyra.com/saratoga/information/community-relations.

*Adopt-A-Soldier was scheduled to appear at the Community Outreach Booth on Friday, July 31, but cancelled due to an emergency. The non-profit organization, which sends care packages to U.S. troops overseas, has been invited to reschedule its participation on an available date.