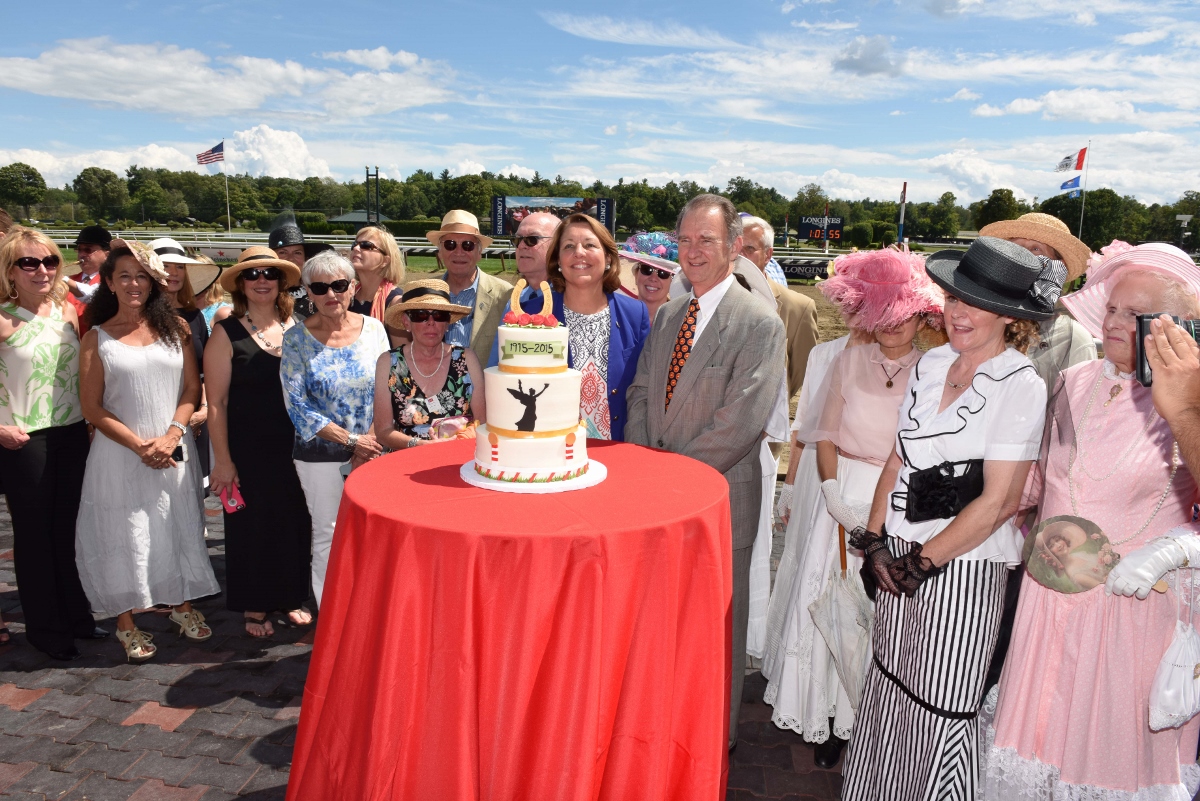 Saratoga Centennial Day, which celebrates the 100th anniversary of the incorporation of the City of Saratoga Springs in 1915, featured a variety of activities and entertainment designed to celebrate the history and tradition of the Spa City.

The day included a special performance of the Call to the Post by Sam the Bugler accompanied by select members of the Philadelphia Orchestra, who are in town for their annual summer residency and will make their seasonal debut Wednesday evening at the Saratoga Performing Arts Center. The Call to the Post took place in the winner’s circle prior to race number three on the day’s card named in honor of the Saratoga Springs’ Centennial.

Members of the Saratoga Centennial Committee presented the trophy for the eponymous race followed by the presentation of a three-tiered cake produced by The Bread Basket, a second-generation Saratoga Springs business, in honor of the anniversary.

The NYRA Community Outreach Booth featured the well-known Saratoga Springs-based men’s acapella group Racing City Chorus. Members of the chorus raised funds for the organization by performing at the booth throughout the afternoon as it celebrates its own milestone 60-year anniversary.

“What a fabulous day, we had a great day,” said Jerry Crouth who has performed with the Racing City Chorus for more than 20 years. “It was very successful from a fundraising standpoint, but even more so from the amount of publicity that we got for our organization. We couldn’t have imagined any better way to generate exposure for the Racing City Chorus than performing at the track on Centennial Day before so many thousands of fans.”

Additionally, guests to the Pavilion had the opportunity to learn about and taste the waters from several of the natural springs Saratoga is famous for; enjoyed ice cream tastings from locally-owned Stewart’s Shops; samples of the famous Peppermint Pig from Saratoga Sweets; and popcorn from the Saratoga Auto Museum Antique Popcorn Wagon.

The track décor and atmosphere reflected the celebration with the Saratoga Centennial flag on display in the infield and entertainers dressed in Victorian-era costumes strolling the grounds. Select cars from the Saratoga Auto Museum and an antique carriage from Saratoga Horse and Carriage were on display at the Clubhouse entrance.

Saratoga Centennial Day at Saratoga Race Course is one element of the year-long celebration of the 100th anniversary of the official incorporation of the City of Saratoga Springs, which was signed into law on April 7, 1915. The year-long celebration includes a series of events and activities which highlight the history and culture of the Spa City, including the publication of a book curated by local historian Field Horne; the re-dedication of the restored Spirit of Life statue, a city icon sculpted by Daniel Chester French; and the restoration and re-piping of High Rock Spring.

For more information about the Saratoga Centennial, visit www.saratogacentennial.com.