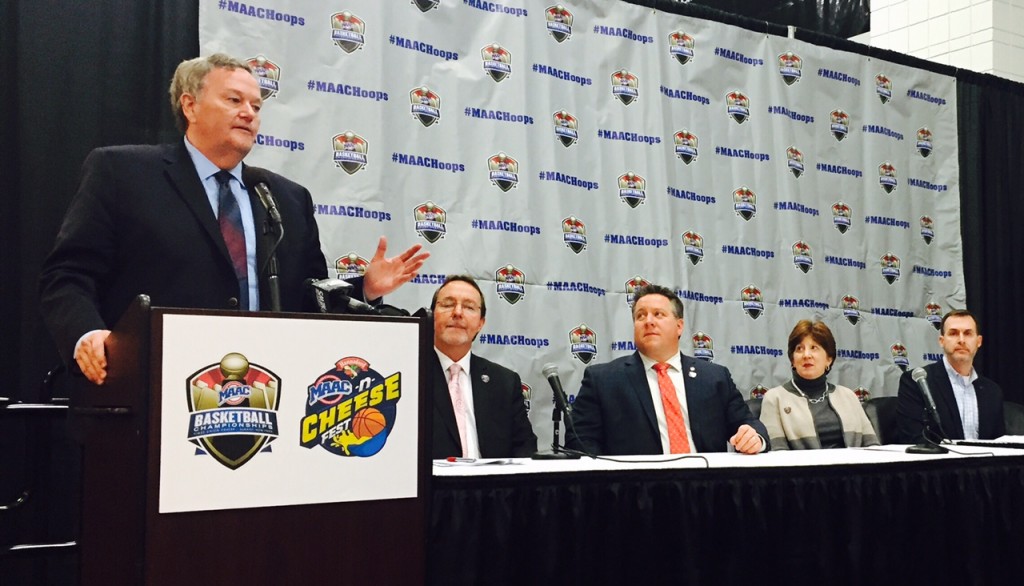 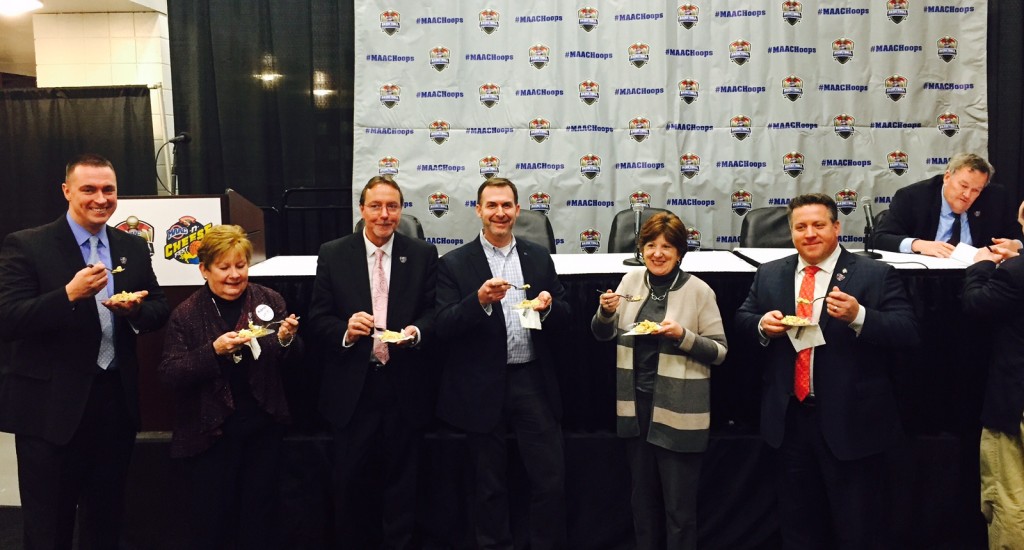 ALBANY, N.Y. – The Metro Atlantic Athletic Conference (MAAC), in partnership with the Albany County Convention and Visitor’s Bureau, is undertaking a series of community and fan initiatives in celebration of the 2016 MAAC Men’s and Women’s Basketball Championships, March 3-7 at Times Union Center in Albany, NY.

The exciting lineup of events will include a variety of activities for basketball fans of all ages as they prepare to witness the popular basketball tournament featuring top National Collegiate Athletic Association (NCAA) Division I programs Canisius, Fairfield, Iona, Manhattan, Marist, Monmouth, Niagara, Quinnipiac, Rider, St. Peter’s, and Siena College.

“We’re thrilled to supplement the on-court action of the 2016 MAAC Basketball Championships with exciting initiatives for fans, students, local residents, and visitors to the Capital Region,” said MAAC Commissioner Richard Ensor. “Downtown Albany and the Times Union Center will be transformed into an atmosphere that truly represents the excitement of MAAC basketball.”

The Metro Atlantic Athletic Conference will make special outreach to local elementary, middle and high school students during its time in the Capital Region for the 2016 MAAC Men’s and Women’s Basketball Championships.

On Friday, March 4, more than 300 elementary and middle school students will be transported via the Bus Brigade to attend women’s quarterfinal games at the Times Union Center as guests of the MAAC.

Winners of the MAAC Gives Back essay contest will be recognized during the women’s quarterfinal games. The essay contest is the culmination of a season-long pen pal program that matched MAAC student-athletes with Capital Region students. Students were asked to answer the question: “What is an important life skill you learned from being a part of a team? How have you used this life skill in a positive manner?”

The MAAC Post Season Awards Show will broadcast on ESPN3 from 5 to 7 p.m. on Friday, March 4.

Bounce to the Arena will kick off the day’s festivities on Saturday, March 5 at 10:30 a.m. when children, including many from the Albany Police Athletic League, will dribble basketballs from the Palace Theatre to the Times Union Center, where they will be greeted by school bands, mascots, and cheer squads from the MAAC. The bands will take center stage in front of the arena for the MAAC Band Jam at 10:45 a.m.

The centerpiece off-court event of the weekend is the all-new Hannaford MAAC-n-Cheese Fest, which will be held on Friday, March 4 from 4 to 6:30 p.m. The tip-off event will take place prior to the men’s quarterfinals session at 90 State Events – within walking distance to the Times Union Center.

“Hannaford is excited to be a part of this inaugural event which will serve as the signature attraction for the community in celebration of the return of the MAAC Basketball Tournament to downtown Albany,” said Hannaford Supermarkets Community Relations Specialist Brian Fabre. “We encourage basketball fans as well as fans in general of great mac-n-cheese and craft beer to join us for a fun evening to kick off the tournament.”

“We are thrilled to bring the Hannaford MAAC-n-Cheese Fest to downtown Albany. This evening of fantastic food and craft beer will highlight local restaurants while providing a great way for basketball fans to get ready to cheer on their favorite teams,” said Albany County Convention and Visitors Bureau President and CEO Michele Vennard. “We look forward to hosting tournament attendees for a weekend of championship basketball in downtown Albany.”

Tastings for the Hannaford MAAC-n-Cheese Fest are $10 for 10 sampling tickets, which can be used in any combination for selections of mac-n-cheese and craft beer. A set of 10 sampling tickets may be purchased in advance and reserved online at www.albany.org for $8, a 20 percent discount on the door price. Online ticket sales will conclude on Friday, March 4 at 10 a.m. Capacity for the event will be capped at 800 guests. A portion of proceeds will jointly benefit the Regional Food Bank of Northeastern New York and the Times Union Hope Fund.

FanFest activities will also take place inside the Times Union Center on the concourse, featuring street performers, artists, and inflatable games on Friday, March 4 and Saturday, March 5 from 6-9 p.m.; and Sunday, March 6 from 3:30 to 6:30 p.m. The FanFest is free with paid admission to the 2016 MAAC Men’s and Women’s Basketball Championships.

Flex ticket packages and individual-session tickets are available for the 2016 MAAC Basketball Championships.

Flex ticket packages feature four tickets redeemable for any open seat, including available seating in the premium lower level, during any session of the MAAC Men’s and Women’s Basketball Championships, as well as both championship games. The tickets may be utilized for four seats to one session, one seat for four sessions, or any ensuing combination to enable fans to tailor the tournament experience to meet their needs. Flex ticket holders will be able to select any available seats within the arena.

Fans who purchase a flex ticket package will receive additional incentives, including food and drink vouchers to the Hannaford MAAC-N-Cheese Fest; a complimentary beverage with a beverage purchase at Angelo’s 677 Prime, downtown Albany’s premier restaurant; and the opportunity to win two tickets to Jerry Seinfeld at the Palace Theatre, also in downtown Albany, on Thursday, March 3 at 7 p.m.

Flex ticket packages, comprised of four tickets, are available for $150.

Individual session passes grant pass holders access to one of 10 sessions during the tournament including the men’s and women’s championships, which are designated as individual sessions.

All ticket options can be purchased in-person at the Times Union Center box office, by phone at 1-800-745-3000, and online at www.timesunioncenter-albany.com.