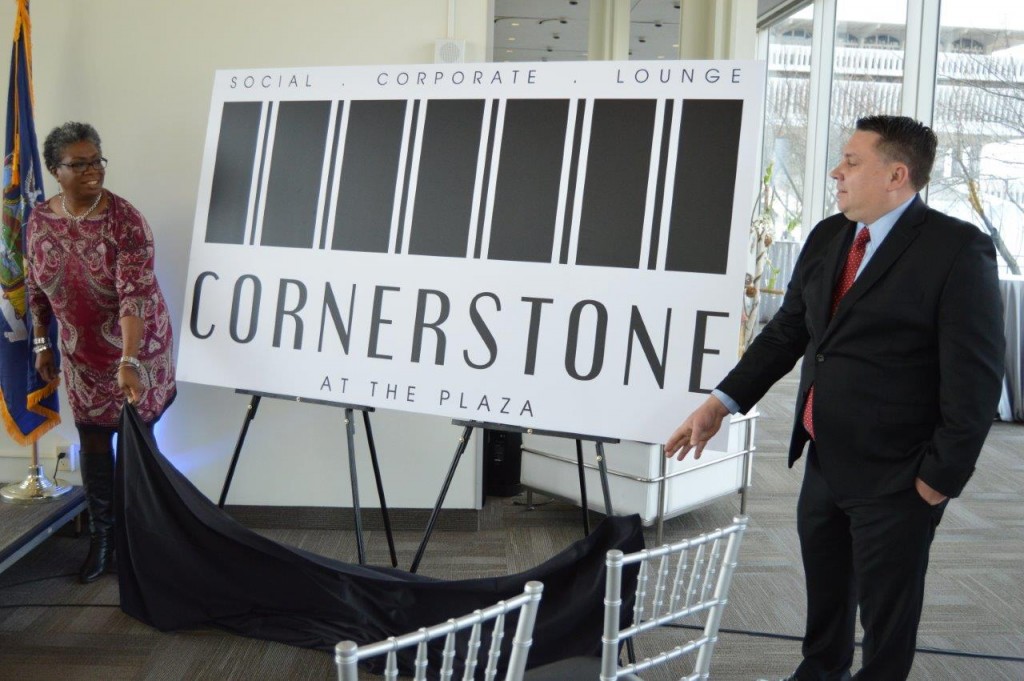 Office of General Services Commissioner RoAnn Destito today announced that Cornerstone at the Plaza, a new event venue and restaurant will open in the former Sign of the Tree Restaurant on the Empire State Plaza.  The venue will operate under the stewardship and management of Capital Region restaurateur and catering company Mazzone Hospitality and will include on the menu foods and beverages produced in New York State. Cornerstone at the Plaza will host social, corporate, and legislative functions beginning in January 2016.

“The overwhelming success of Governor Cuomo’s Taste NY initiative has shined a light on the amazing food and beverages produced here in our state,” Commissioner Destito said. “So it makes perfect sense for those who dine or attend a function at Cornerstone at the Plaza, which will be located in the heart of state government, to be able to enjoy some of our New York State products.”

Cornerstone at the Plaza will be available immediately for private functions, including weddings, and will also be the site of a Mazzone Hospitality restaurant, which is slated to open in late 2016. The restaurant, which features large glass walls overlooking the Empire State Plaza, will be open to the public for dining exclusively during the legislative session.

Located under the shadow of The Egg, Cornerstone at the Plaza offers panoramic views of the City of Albany and the Empire State Plaza, including the ice rink in the winter and fountains in summer. The space will host events for up to 250 guests and allow for outdoor wedding ceremonies and cocktail receptions on the Empire State Plaza. The site was last operated as a restaurant in 2006 and continued to be used as a catering venue through 2013.

“Mazzone Hospitality is honored to join the New York State Office of General Services in the re-opening of this iconic dining and entertainment spot, which is a treasured piece of New York State and Capital Region history,” said Mazzone Hospitality Owner Angelo Mazzone. “We’re thrilled to contribute to the redevelopment of downtown Albany, which is witnessing a rebirth through the ongoing upgrades to the Empire State Plaza and the construction of the Albany Capital Center.”

Mazzone Hospitality currently operates a cafeteria and kiosk on the north end of the concourse, pbd kitchen in the center concourse and is a caterer servicing the Empire State Plaza Convention Center and Corning Tower observation deck.

New York State produces some of the best food and beverages in the world. Governor Cuomo’s Taste NY initiative encourages New Yorkers and tourists alike to try our state’s homegrown products and help us continue to grow the state’s thriving agricultural industry.

For more information about Cornerstone at the Plaza or to reserve the space, contact Vanessa McMahon at 518-463-0568 or by e-mail at [email protected].