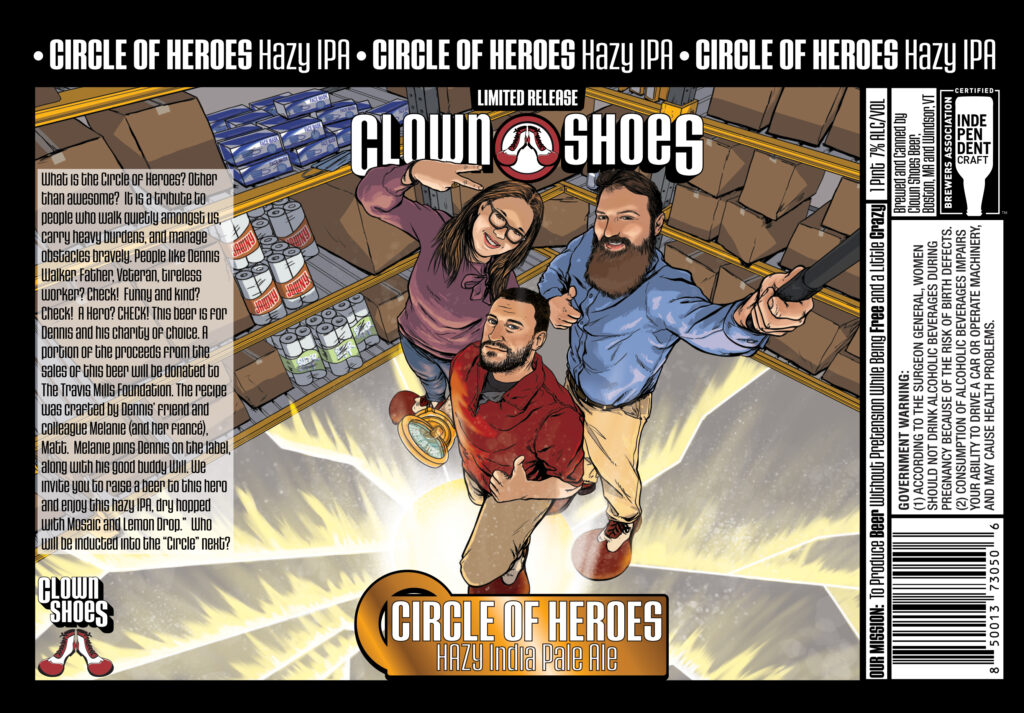 Scarborough, Maine – Grocery associates are among the many front-line workers who have been heroic during the pandemic, being there for our communities every day, making sure people have access to the food and medicine they need. To highlight that work, Clown Shoes of Boston, Mass. has created a tribute product: Circle of Heroes, a limited-edition beer that celebrates the workers who have been there for us throughout COVID-19.

Circle of Heroes will be released as three limited-edition offerings this year, each with a different recipe to highlight a different Hannaford associate. The first edition, hitting stores May 1, will celebrate Dennis Walker, a military veteran and single dad who works at the Waldoboro, Maine Hannaford.

Later editions of Circle of Heroes will feature Eric Strout, who manages the Newport Hannaford and serves as a local fire chief for the town of Levant, and Alicia Campbell Mullings, who is manager of customer service in New Windsor, N.Y., and parent of children involved in many extracurricular activities.

“We jumped at the chance to release a beer to honor front-line workers and grocery associates in particular. It was also great fun to use a recipe created by Melanie from the Hannaford team, a hazy IPA brewed with oats and a blend of Mosaic and Lemondrop hops. Cheers and thank you from the Clown Shoes Beer team!” said Dan Lipke, Head Brewer for Clown Shoes.

Hannaford Category Manager Melanie Daigle and her fiancé, Matt Charette, are amateur home brewers and created the recipe for this special release. Circle of Heroes is a hazy IPA brewed with Mosaic and Lemondrop hops. Pale in color with an aroma bursting with citrus and juicy melon, this 7% abv brew has a full hoppy body with a creamy finish from oats and wheat malt.

“We have been home brewing and creating new recipes for the past 10 years. We love to try using different hop varieties, and the Lemondrop hop has been one of our favorites! It has been a dream come true to have a recipe we created brewed by Clown Shoes, as we have always enjoyed their IPAs” said Daigle.

With each of the three editions of Circle of Heroes, the highlighted associate will be donating a total of $6,000 to their charity of choice – $3,000 donated from Clown Shoes and $3,000 donated from Hannaford. Walker selected the Travis Mills Foundation, which helps support recalibrated veterans and their families through long-term programs that help these heroic men and women overcome physical obstacles, strengthen their families, and provide well-deserved rest and relaxation.

Clown Shoes was founded in 2009 by Gregg Berman, who first brewed a small batch of “Hoppy Feet” Black IPA. Since then, Clown Shoes has become known for putting their unique spin on traditional styles of beer with eye-catching labels – and for its growing program of special releases and barrel-aged beers. They are one of the first craft beer companies to experiment with terpenes, aromatic oils that are found in natural botanical sources including cannabis and hops, resulting in the successful launch of the beer Rainbows Are Real. Clown Shoes joined Mass. Bay Brewing Company, Inc. in 2017, from which time it has continued to grow, innovate, and offer unique beers with a sense of style and personality.