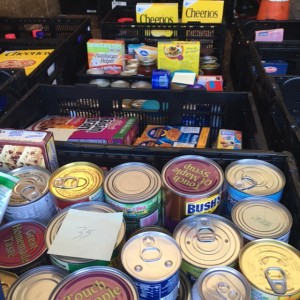 TROY, N.Y. – Hannaford Supermarkets and the Tri-City ValleyCats teamed up to support hunger relief efforts with a special “Hannaford Helps Fight Hunger Night” on Saturday, August 20 at Joseph L. Bruno Stadium. The food drive took place during the home game against Hudson Valley and generated more than 600 pounds of food for The Food Pantries for the Capital District.

“Hannaford is committed to fighting hunger within the communities we serve and we are honored to have partnered with the Tri-City ValleyCats on this initiative,” said Hannaford Supermarkets Community Relations Specialist Brian Fabre. “It was great to have fans join us for a night of action on the field while supporting The Food Pantries for the Capital District.”

“Partnering with Hannaford Supermarkets and The Food Pantries for the Capital District provided a great opportunity for our fans to have a fun night out while making a positive impact on the community,” said Matt Callahan, General Manager of the Tri-City ValleyCats. “It was great to see the excitement the fans had during the third annual Hannaford Helps Fight Hunger Night.”

“Teaming up with Hannaford Supermarkets and the ValleyCats for this fun-filled night makes a difference for our local community members in need,” said Natasha Pernicka, Executive Director of The Food Pantries for the Capital District. “Raising money and collecting needed food items, like peanut butter and jelly, helps support efforts to provide food to children and their families in the summer, a time period during which many families struggle since school breakfast and lunch programs are not in session. The Food Pantries for the Capital District is grateful for our partners and the community for their efforts to help alleviate hunger.”

The Hannaford Helps Fight Hunger campaign is an extension of the work that local Hannaford stores and distribution centers engage in daily. Hannaford donated more than 20 million pounds of rescued food to Northeast hunger relief in 2015.

Hannaford Supermarkets, based in Scarborough, Maine, operates 189 stores in the Northeast. Stores are located in Maine, New York, Massachusetts, New Hampshire, and Vermont. Hannaford employs more than 27,000 associates. Additional information can be found at www.hannaford.com.