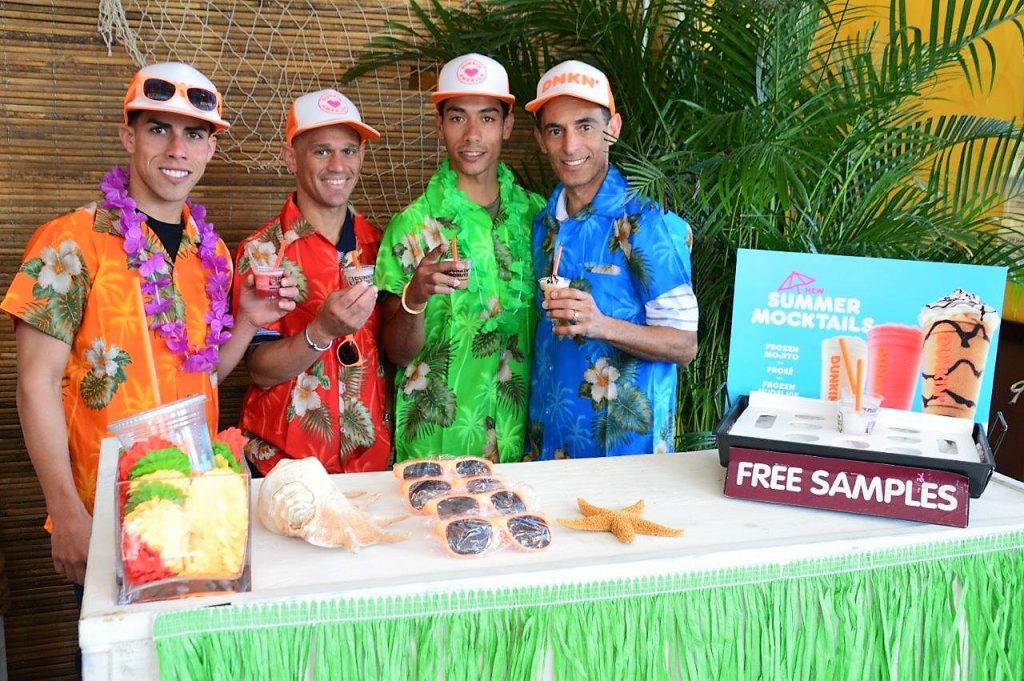 SARATOGA SPRINGS, NEW YORK; – Four of the world’s most famous and accomplished jockeys made a special appearance at the Dunkin’ restaurant on South Broadway in Saratoga Springs today to serve up the brand’s new line of Frozen Mocktails, cool and refreshing cocktail-inspired frozen drinks that make any day feel like a vacation.

Eclipse Award-winning jockeys and brothers Irad Ortiz, Jr. and Jose Ortiz were joined by Hall of Fame riders Javier Castellano and John Velazquez to serve up Frozen Mocktails behind a tiki bar at the Dunkin’ restaurant, which was transformed into the ultimate tropical destination featuring palm trees and live island music throughout the morning. Guests were greeted with floral leis and Dunkin’ gift cards during the special event.

The Capital Region is one of two markets in the country where Dunkin’ is launching the Frozen Mocktails beverages on a trial, limited-time-only basis during the month of August (or while supplies last). The Frozen Mocktails flavor offerings include Frosé, Frozen Mudslide and Frozen Mojito.

“Dunkin’ Frozen Mocktails are the perfect summertime beverage to allow our guests to chill out and enjoy a moment in paradise,” said Dunkin’ Integrated Marketing Manager Eric Stensland. “We really embraced the launch of these new flavors by inviting these outstanding jockeys and overhauling our restaurant into a small piece of paradise for our guests. Saratoga has always been the summer place to be and we’re thrilled to celebrate our new premium line of frozen beverages which add a fun option to Dunkin’s frozen family.”

The visit from the jockeys came during the highly popular summer thoroughbred racing meet at Saratoga Race Course.

Velazquez is the all-time leading rider at Saratoga Race Course and was inducted into the National Museum of Racing and Hall of Fame in 2012.

Castellano was inducted into the National Museum of Racing and Hall of Fame in 2017 and is a record setting six-time winner of the Travers Stakes, the oldest race in the nation for 3-year-olds.

The Ortiz Brothers together have won back to back Eclipse Awards and have dominated the jockey standings at Saratoga the past three years.

Irad Ortiz, Jr. won the Eclipse Award for the sport’s outstanding jockey in 2018. He is also looking to defend his 2018 title as the leading jockey at Saratoga after coming off a 52-win meet.

Jose Ortiz won the 2017 Eclipse Award as the sport’s top jockey and won back-to-back Saratoga riding titles in 2016 and 2017.

In addition to serving as the sponsor of the early and late Daily Double at Saratoga Race Course, Dunkin’ will donate one pound of coffee to the Backstretch Employee Service Team for each win by the leading owner, trainer and jockey of the 2019 season.

Founded in 1950, Dunkin’ is America’s favorite all-day, everyday stop for coffee and baked goods. Dunkin’ is a market leader in the hot regular/decaf/flavored coffee, iced regular/decaf/flavored coffee, donut, bagel and muffin categories. Dunkin’ has earned a No. 1 ranking for customer loyalty in the coffee category by Brand Keys for 13 years running. The company has more than 12,800 restaurants in 44 countries worldwide. Based in Canton, Mass., Dunkin’ is part of the Dunkin’ Brands Group, Inc. (Nasdaq: DNKN) family of companies. For more information, visit www.DunkinDonuts.com.