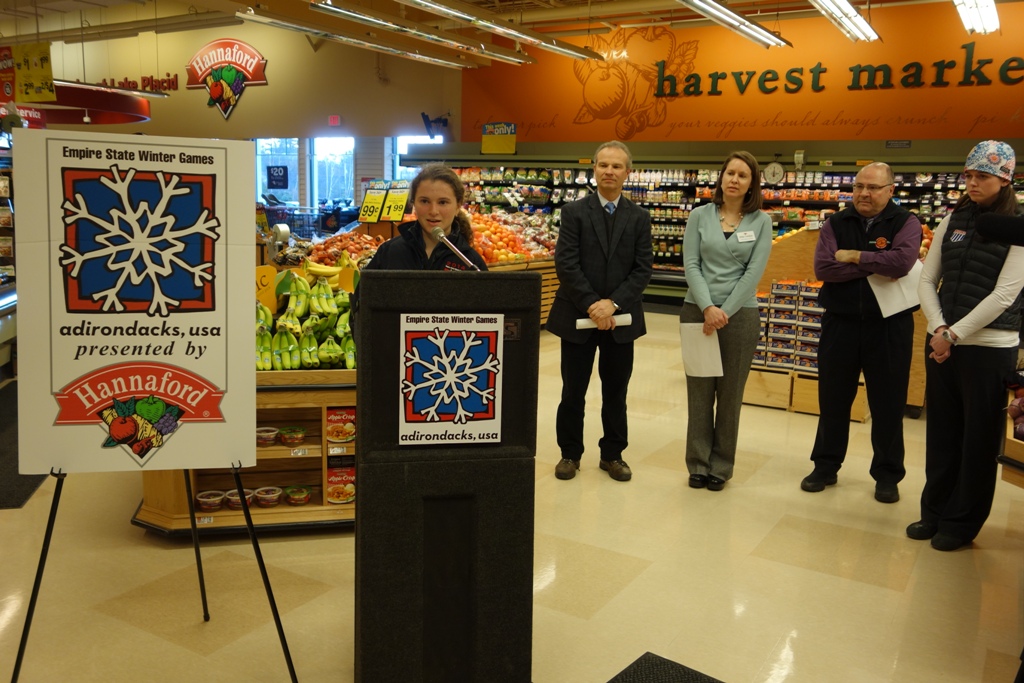 LAKE PLACID, New York – Organizers of the 2014 Empire State Winter Games today announced that Hannaford Supermarkets will serve as its inaugural presenting sponsor of the annual event when it returns to New York’s Adirondack region on February 6-9. The contribution from Hannaford marks the first major corporate partnership for the Empire State Winter Games since its transition to a private operation four years ago.

Officials from the Empire State Winter Games and past and present athletes from the games joined representatives from Hannaford Supermarkets to announce the partnership at Hannaford locations in Lake Placid and Albany.

The 2014 Empire State Winter Games are a multi-day event that will bring together more than 1,000 athletes from across New York State. The athletes will compete in a variety of sports, including adaptive competitions, and will see all age groups represented from youth to masters.

As the largest corporate partner and first presenting sponsor of the annual youth sporting competition, Hannaford will provide significant funding for these games which rely primarily on private sector support.

“Lake Placid and the Adirondack region of New York State have a unique place in Olympic history. Hannaford is thrilled to support the Empire State Winter Games and the outstanding athletes who continue to inspire us with their dedication and commitment to their sport,” said Hannaford Supermarkets Community Relations Specialist Molly Tarleton. “Hannaford looks forward to advancing the legacy of winter sports in Lake Placid through our partnership with the 2014 Empire State Winter Games.”

The 34th edition of the Empire State Winter Games marks the fourth year the event has been privately hosted and funded by a unique and diverse Adirondack regional coalition, consisting of the Towns of North Elba, Harrietstown, Brighton, Tupper Lake, Wilmington and Jay; Villages of Lake Placid, Tupper Lake and Saranac Lake; the counties of Essex and Franklin; the Regional Office of Sustainable Tourism and the New York Olympic Regional Development Authority.

As presenting sponsor of the 2014 Empire State Winter Games, Hannaford Supermarkets will offer a number of special benefits for participating athletes, spectators and consumers in support of the games.

Additionally, Hannaford will offer winter sports enthusiasts the unique opportunity to visit the home of the 1932 and 1980 Winter Olympics with in-store contests to win one of three Lake Placid Getaway travel packages. The package includes three night accommodations for two at select hotels in Lake Placid; daily breakfast; a pair of two-day lift tickets to Whiteface Mountain; ski or snowboard rentals; a bobsled ride for two; access to all Olympic venues including the Olympic ski jumps, museum, sports complex and speed skating oval. Restrictions may apply.

Shoppers are invited to enter-to-win at participating Hannaford locations throughout upstate New York and the greater Burlington, Vt. area between January 15 and January 27. Winners will be randomly selected from all entries and announced on January 29.

Officials from Hannaford will also welcome athletes during the Empire State Winter Games Opening Ceremony on Thursday, February 6 at 6 p.m. in the Olympic Center’s 1980 Herb Brooks Arena in Lake Placid. The ceremony, which is free and open to the public, will take place one night prior to the start of the Winter Olympics in Sochi, Russia.

The Empire State Winter Games is a community-driven event, courtesy of a partnership between ROOST, Towns of North Elba, Harrietstown, Brighton, Wilmington, Tupper Lake and Jay; Villages of Lake Placid, Tupper Lake and Saranac Lake; the counties of Essex and Franklin; the NY State Olympic Regional Development Authority, and State Senator Betty Little. LPEC Quality Destination, Inc., a subsidiary of ROOST, is a 501(c) (3) not-for-profit, and is fiscally responsible for the ESWG.