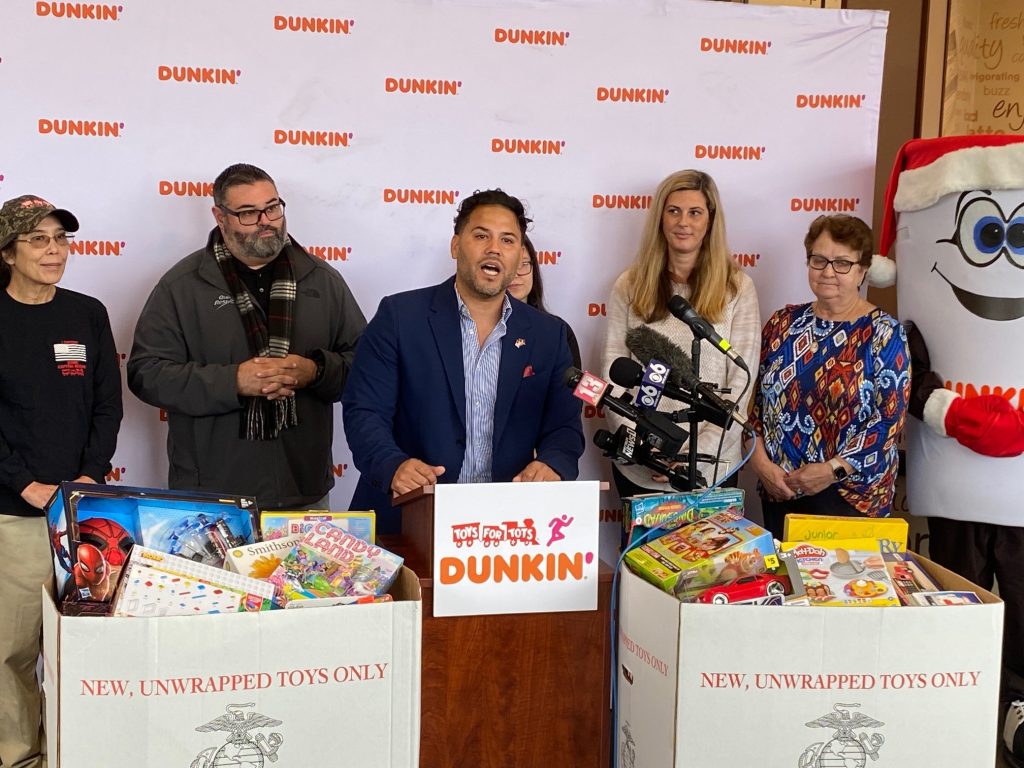 Malta, NY; – Dunkin’ today kicked off the 2022 edition of the Capital Region Toys for Tots program by announcing a $25,000 donation from its local and regional franchisees. The donation will be used by members of the Marine Corps Reserve to help deliver cheer to children across New York and brings Dunkin’s total support of the holiday collection campaign to $400,000 over the past 14 years.

This year marks the 75th anniversary of the Marine Corps Reserve Toys for Tots program.

Since 2009, Dunkin’ and its franchisees have supported the Capital Region’s Toys for Tots campaign whose collection drive will take place at approximately 400 locations throughout the area. These include more than 100 Dunkin’ restaurants, which will serve as drop-off points for guests wishing to donate new, unwrapped toys.

“Dunkin’ is honored to contribute to the efforts of the Marines and congratulates them on the 75th anniversary of their signature holiday initiative,” said Capital Region Dunkin’ franchisee Natasha Teixeira. “Bringing joy to children in need is a goal Dunkin’ strives to accomplish throughout the year and especially during the holiday season. Working alongside these dedicated volunteers and partner organizations is an extraordinary example of the season of giving.”

Capital Region Toys for Tots and the Marine Corps Reserve will work with more than 250 community agencies across the state to serve more than 200,000 children this holiday season.

“We are grateful to Dunkin’ and our many community partners for their support this holiday season,” said Marine Gunnery Sgt. (Ret.) Albert Roman, local coordinator of the Capital Region’s Toys for Tots campaign. “The enormous generosity of the Capital Region community, Dunkin’, and numerous other local companies and organizations, will help bring new toys to thousands of children in New York this holiday season.”

Representatives from Capital Region Toys for Tots and Dunkin’ were joined by area campaign supporters for today’s kick-off event which included the announcement of a new warehouse for the holiday campaign. The warehouse was donated by Adirondack Basement Refinishing Systems Owner Kevin Koval to serve as the new Capital Region home of the Toys for Tots program.

Capital Region Toys for Tots is actively looking for local businesses and individuals to provide box trucks and other vehicles to help transport thousands of toys from the former warehouse space in Clifton Park to the new location based in Mechanicville. Interested businesses or individuals can contact Toys for Tots at [email protected].

The PYX 106 drive through drop off event will take place from 9 to 10:30 a.m. and the sheriff’s convoy will depart Ballston Spa High School at 11 a.m. During the past nine years, more than 110,000 toys were donated to support children across upstate New York.

To learn more about Dunkin’, visit www.DunkinDonuts.com or subscribe to the Dunkin’ blog to receive notifications at https://news.dunkindonuts.com/blog