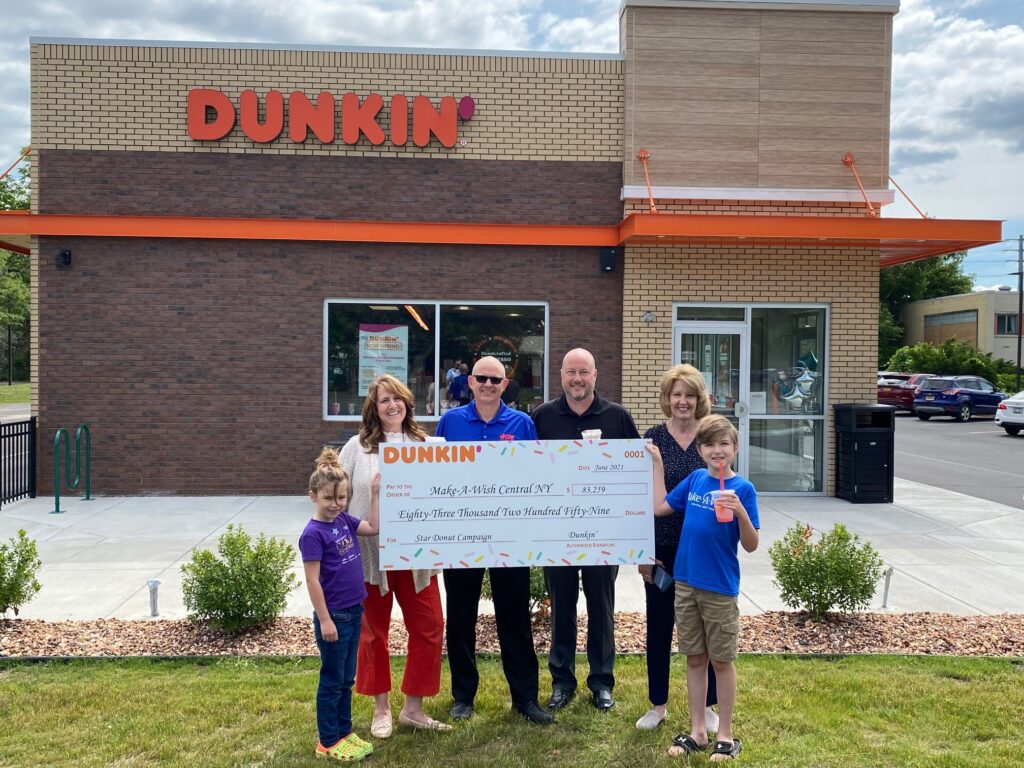 Annual campaign has generated more than $644,000 to support wishes of local critically ill children since its inception

In partnership with its guests, Dunkin’ has now raised approximately $644,000 for local Make-A-Wish chapters throughout upstate New York since the Star Donut campaign’s introduction in 2013.

During the campaign, guests who contribute $1 to Make-A-Wish at participating Dunkin’ restaurants in Central New York received a special Make-A-Wish Star Donut as a thank you for their generosity. This year’s Star Donut initiative took place from April 28 through May 9.

“Dunkin’ is honored to support Make-A-Wish Central New York, which works tirelessly to help make the wishes of critically ill local children come true,” said Eric Stensland, Field Marketing Manager for Dunkin’. “We’re thrilled we could provide Central New York residents with a special treat while supporting an organization that is so important to the children and families in our community. We would like to thank all of our valued guests who joined us to make this year’s Star Donut campaign such a success.”

“We are so grateful to Dunkin’ and their customers for the ongoing success of this campaign,” said Make-A-Wish Central New York President and CEO Diane Kuppermann. “From the first year of COVID-19 to the gradual emergence from it, what Dunkin’ and their patrons achieved for wishes in the midst of a pandemic is absolutely incredible. The results from the last two campaigns are phenomenal. We’re fortunate to have such a tremendous partner and we’re thrilled to say wishes really do run on Dunkin’.”

Make-A-Wish Central New York creates life-changing wishes for children with critical illnesses throughout a 15-county region of New York State. The organization has granted more than 1,900 wishes since inception in 1985.

Make-A-Wish Central New York is a nonprofit, tax-exempt organization dedicated to granting life-changing wishes for children with critical illnesses throughout the central portion of New York State. Founded in 1985, Make-A-Wish Central New York has granted more than 1,900 life-changing wishes for local, critically ill children. The organization believes in the transformative joy a wish can bring and is committed to reaching every eligible child within its 15-county footprint, which includes Broome, Cayuga, Chenango, Cortland, Herkimer, Jefferson, Lewis, Madison, Oneida, Onondaga, Oswego, Otsego, St. Lawrence, Tioga and Tompkins counties. With nearly 200 wishes in process, the organization needs the support of generous community and corporate partners more than ever before. To lend support or learn more, visit www.cny.wish.org, email [email protected], or call 315-475-WISH (9474) | 800-846-9474.

Founded in 1950, Dunkin’ is America’s favorite all-day, everyday stop for coffee and baked goods. Dunkin’ is a market leader in the hot regular/decaf/flavored coffee, iced regular/decaf/flavored coffee, donut, bagel and muffin categories. Dunkin’ has earned a No. 1 ranking for customer loyalty in the coffee category by Brand Keys for 14 years running. The company has more than 12,600 restaurants in 40 countries worldwide. Dunkin’ is part of the Inspire Brands family of restaurants. For more information, visit www.DunkinDonuts.com.