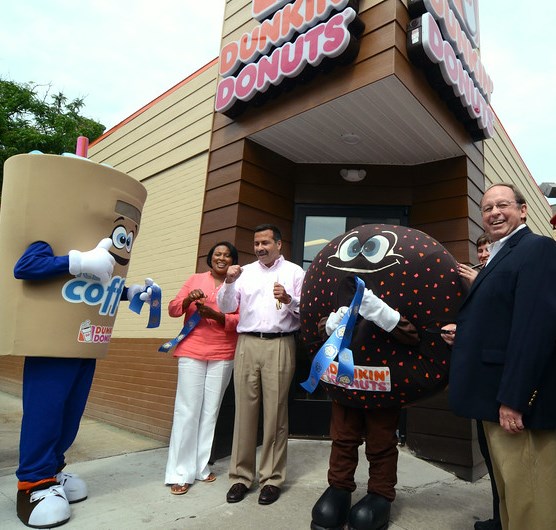 Rochester Mayor Lovely Warren and other city officials joined Dunkin’ Donuts representatives to mark the occasion with a ceremonial brew at the new location.

The new restaurant is open Monday through Friday from 5:30 a.m. to 8 p.m. and Saturday from 6 a.m. to 5 p.m. It will employ approximately 15 crew members and offers a complete menu of Dunkin’ Donuts’ internationally recognized coffee, lattes, donuts and bakery goods.

“Dunkin’ Donuts is one of the world’s leading brands, and it has also become a favorite in Rochester said Bob Alberti, Vice President of Operations for Cafua Management, a Dunkin’ Donuts franchise partner in Rochester. “We are proud to serve the people of Rochester and hope our first downtown location will become a popular destination for guests.”

The new restaurant is the fourth of up 20 Dunkin’ Donuts locations to open in the Greater Rochester area as part of a development plan announced in August 2013.

Founded in 1950, Dunkin’ Donuts is America’s favorite all-day, everyday stop for coffee and baked goods. Dunkin’ Donuts is a market leader in the hot regular/decaf/flavored coffee, iced coffee, donut, bagel and muffin categories. Dunkin’ Donuts has earned the No. 1 ranking for customer loyalty in the coffee category by Brand Keys for eight years running. The company has nearly 11,000 restaurants in 33 countries worldwide. Based in Canton, Mass., Dunkin’ Donuts is part of the Dunkin’ Brands Group, Inc. (Nasdaq: DNKN) family of companies. For more information, visit www.DunkinDonuts.com.