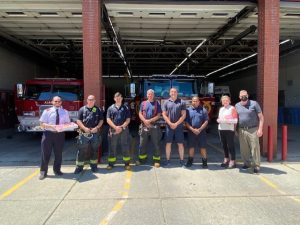 ALBANY, NY  – Dunkin’ today teamed up with The Salvation Army of Albany and The Salvation Army of Saratoga Springs to honor the sweet traditions of National Donut Day and spent the afternoon making special deliveries of donuts and coffee to support veterans, first responders and residents throughout the Capital Region.

Dunkin’ is also celebrating National Donut Day in the Capital Region with a free donut offer for its loyal guests. On Friday, June 3, Dunkin’ will offer guests a free classic donut of their choice with the purchase of any beverage at participating restaurants, while supplies last.

“We’re proud to team up with The Salvation Army and give back to our many veterans, first responders and guests across the Capital Region,” said Capital Region Dunkin’ Franchisee Tom Burke. “This donation is our way of saying thank you for all they do for our communities on a daily basis. We want the Capital Region to know they can always count on Dunkin’ to keep them running.”

“We are elated and so excited to partner with Dunkin to honor so many heroes and first responders in our community,” said Salvation Army Captain Bree Barker. “It seems like such a small gesture for those who give so much, but anything we can do to show our appreciation is a true joy.”

The origin of National Donut Day dates back to World War I, when nearly 250 Salvation Army volunteers known as “Donut Lassies” traveled overseas to provide emotional and spiritual support as well as fried confections, supplies and other services to troops on the front lines. The Donut Lassies fried donuts in small pans and are credited with popularizing the donut in the United States when troops returned home from war. Held annually on the first Friday in June, The Salvation Army in Chicago celebrated the first National Donut Day in 1938 to help those in need during the Great Depression and to commemorate the work of the Donut Lassies.

For more than a century, The Salvation Army has continued to provide a wide range of essential services like food, shelter and emotional and spiritual support to the most vulnerable and to many of the men and women serving on the front lines of need.

About The Salvation Army USA

The Salvation Army annually helps 30 million Americans overcome poverty, addiction, and economic hardships through a range of social services. By providing food for the hungry, emergency relief for disaster survivors, rehabilitation for those suffering from drug and alcohol abuse, and clothing and shelter for people in need, The Salvation Army is doing the most good at 7,600 centers of operation around the country. In the first-ever listing of “America’s Favorite Charities” by The Chronicle of Philanthropy, The Salvation Army ranked as the country’s largest privately funded, direct-service nonprofit. For more information, visit SalvationArmyUSA.org. Follow us on Twitter: @SalvationArmyUS and #DoingTheMostGood

About Dunkin’
Founded in 1950, Dunkin’ is America’s favorite all-day, everyday stop for coffee and baked goods. Dunkin’ is a market leader in the hot regular/decaf/flavored coffee, iced regular/decaf/flavored coffee, donut, bagel and muffin categories. Dunkin’ has earned a No. 1 ranking for customer loyalty in the coffee category by Brand Keys for 15 years running. The company has more than 12,600 restaurants in 40 countries worldwide. Dunkin’ is part of the Inspire Brands family of restaurants. For more information, visit www.DunkinDonuts.com.