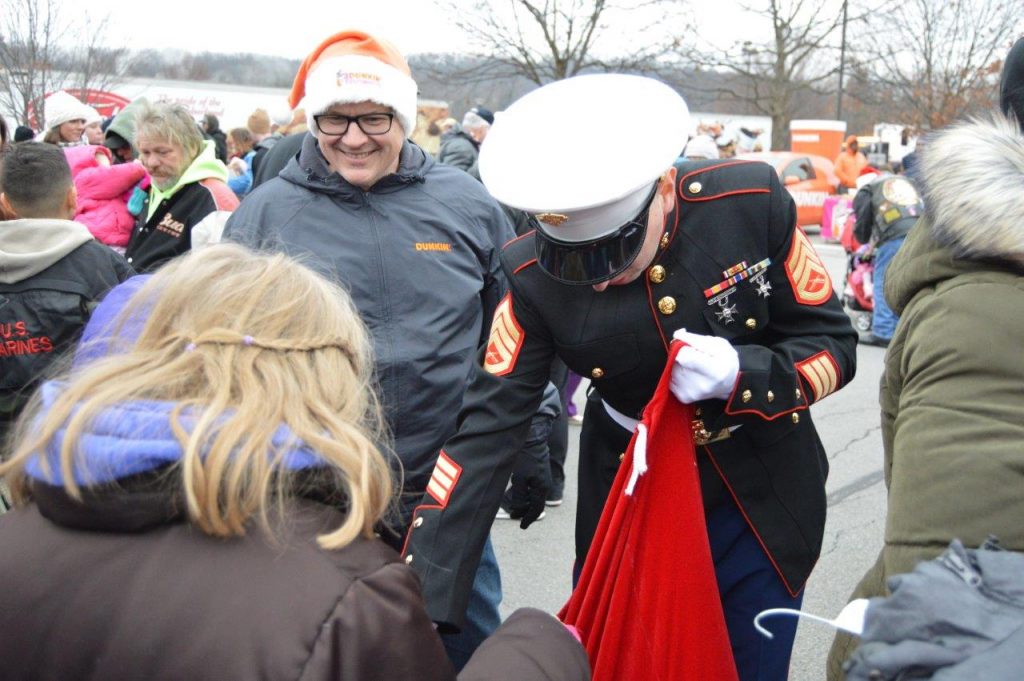 SARATOGA SPRINGS, NEW YORK – The Capital Region Toys for Tots Northern New York Sheriffs Coalition Road Train, powered by Dunkin’ and Upstate Transit of Saratoga, today hit the road to deliver holiday cheer to children across New York. The holiday convoy was made possible by a $30,000 contribution from Dunkin’ to the Toys for Tots Foundation.

Dunkin’ franchisees and volunteers joined U.S. Marine Corps Reserve volunteers as they traversed the state to deliver toys and winter coats to children in need, which were purchased with the $30,000 donation from Dunkin’. Thousands of toys were delivered at each stop to local non-profit organizations and children in need.

Since beginning its support of the holiday toy collection drive in 2009, Dunkin’ has donated nearly $300,000 to the Capital Region-based Toys for Tots Foundation.

“We appreciate the continued support and dedication from our community partner Dunkin’ and its franchisees, who have helped to keep our annual holiday delivery running over the last 10 years,” said Marine Gunnery Sgt. (Ret) Albert Roman, local coordinator of the Capital Region Toys for Tots campaign. “The holiday season is all about giving back to our communities and the generosity from Dunkin’ and numerous other local companies is a true example of what it means to give back.”

Dunkin’ also warmed up the volunteers and families at select stops with complimentary hot chocolate and baked goods.

“Dunkin’ is honored to support the Marines and local law enforcement as they bring joy to children in need through this critical holiday tradition,” said Eric Stensland, integrated marketing manager for Dunkin’. “We are honored to continue our decade of support and happy to be a part of this extraordinary effort that has such a vital impact on families in our community.”

The holiday convoy was the second leg of the annual toy distribution throughout upstate New York. The U.S. Marine Corps Reserves’ Dunkin’ Toys for Tots Train, powered by Norfolk Southern Railway, hit the rails on Saturday, December 1 with stops in Bainbridge, Oneonta, Cobleskill and Delanson.

Anchored by Dunkin’ and its Capital Region franchisees, this year’s train was also supported by Norfolk Southern, Emery and Webb, the Western New York and Pennsylvania Railroad, Amtrak and Bennett and Eric Levin.

The U.S. Marines have worked with more than 200 community agencies to distribute toys this holiday season and were equipped to serve 200,000 children.

Founded in 1950, Dunkin’ is America’s favorite all-day, everyday stop for coffee and baked goods. Dunkin’ Donuts is a market leader in the hot regular/decaf/flavored coffee, iced regular/decaf/flavored coffee, donut, bagel and muffin categories. Dunkin’ has earned a No. 1 ranking for customer loyalty in the coffee category by Brand Keys for 12 years running. The company has more than 12,600 restaurants in 46 countries worldwide. Based in Canton, Mass., Dunkin’ is part of the Dunkin’ Brands Group, Inc. (Nasdaq: DNKN) family of companies. For more information, visit www.DunkinDonuts.com.