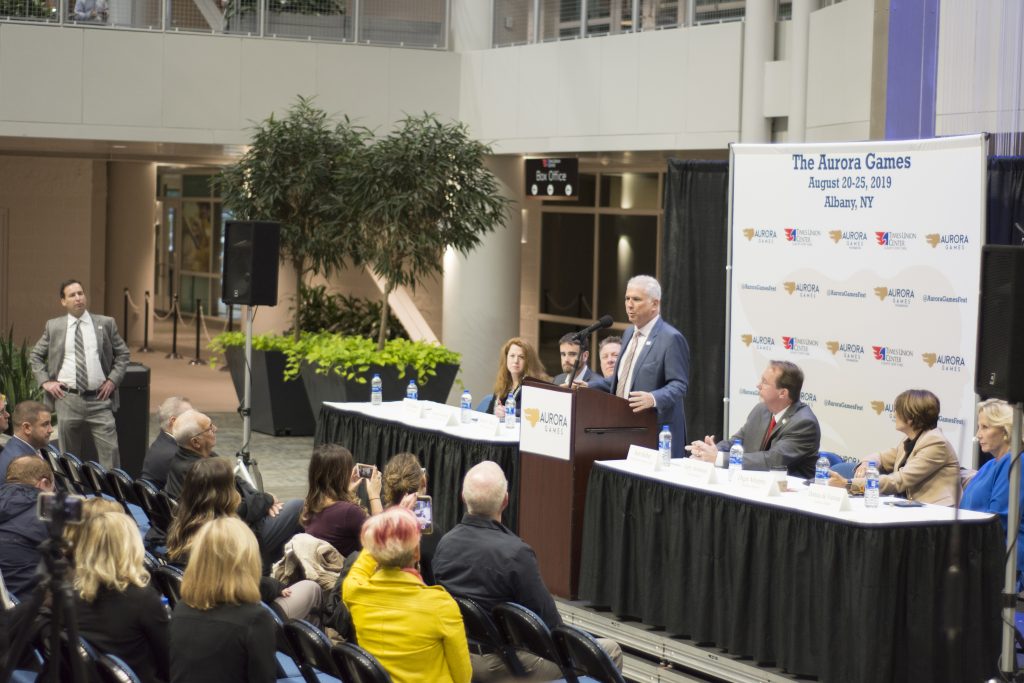 ALBANY, N.Y. – The City of Albany was today named as the official host site of the inaugural Aurora Games, an international, world-class, all-women’s multi-sport competition and entertainment festival. The first-of-its-kind event will be held at the Times Union Center in downtown Albany, NY, August 20-25, 2019.

The Aurora Games, named in honor of the Roman goddess of the dawn, will be held every two years beginning with the inaugural edition in Albany.

Designed to celebrate the best in women’s sports, entertainment and culture, the Aurora Games will welcome all-star athletes, as well as coaches and trainers, representing more than 15 countries to downtown Albany to compete in an international competition of teams comprised of the Americas vs. the World.

“This is an important cultural moment and we are excited to create an event that empowers female athletes and celebrates their unique contributions and accomplishments. As an all-women’s sporting competition, the Aurora Games will showcase the tremendous skill, sportsmanship and dedication these athletes possess,” said Jerry Solomon, creator and executive producer of the Aurora Games. “We are thrilled to host our inaugural event in Albany. The Aurora Games will establish a bold vision for the future of women’s sports. I thank our local partners for embracing this vision and helping us bring it to life.”

Solomon was joined Monday by local officials and Aurora Games advisory board members at the Times Union Center to make the site selection announcement and share their enthusiasm for the Aurora Games.

“I am very excited that Albany has been selected to host the inaugural Aurora Games Festival. This event will highlight the athletic, entertainment, and cultural achievements of women from all over the world,” said U.S. Senator Kirsten Gillibrand. “As the birthplace of the women’s rights movement, New York has always been a leader in women’s social, political, and economic advancement. Albany is the perfect location for this first-of-its-kind event, which will attract people from all over the world to the Capital Region. I was proud to support Albany’s bid to host the games and I look forward to its success.”

“Today’s announcement that the inaugural Aurora Games will be held in Albany County is a proud day for all parties involved. I could not be more excited for this women-only event celebrating athletics, arts, entertainment and culture to call our Times Union Center home. This is a tremendous win for our region, as thousands of competitors and visitors from around the world will visit Albany County, in addition to the millions who will view the event through media coverage. I know the competitors will be impressed with our Albany County facilities, and I look forward to cheering them on,” said Albany County Executive Daniel P. McCoy.

“I am honored Albany has been selected as the host city of the inaugural Aurora Games,” said Albany Mayor Kathy Sheehan. “We are proud to have the opportunity to showcase our vibrant Downtown and the recently-revitalized Times Union Center, and we look forward to welcoming hundreds of all-star female athletes, coaches, trainers, and their fans to New York’s Capital City.”

Albany County tourism and event officials also proclaimed their excitement for the event, which is expected to draw 50,000 fans and both national and international media to downtown Albany over the course of its six-day run.

“The Times Union Center and Albany Capital Center are thrilled to be a part of this moment in sports by hosting the inaugural Aurora Games. Our facilities are a great fit for this all-star competition and fan festival,” said SMG/Times Union Center General Manager Bob Belber. “We look forward to hosting these outstanding athletes and providing a stage for them to showcase their tremendous talents.”

“Albany is proud to be the site of the inaugural Aurora Games. This world-class women’s sports competition presents a new opportunity for Albany and shows that our destination can be a place where women take center stage,” said Discover Albany President and CEO Jill Delaney.

The event today featured a special appearance from two-time Olympic gold medalist Donna de Varona, who serves as a consultant for the Games and is the chair of the athlete advisory board. She rose to fame when at only 13 years old, de Varona became the youngest member of the U.S. team at the 1960 Rome Olympics. In 1964, after breaking 18 world records in swimming, she was named the “Most Outstanding Woman Athlete in the World” by the Associated Press and United Press International.

Heralded as a pioneer in women’s sports, de Varona became the first female sports broadcaster on national network television in 1965. She served five terms on the President’s Council on Physical Fitness and Sports and worked to promote the landmark Title IX legislation, which prohibits sex discrimination in educational programs that receive federal funding. In the mid-1970s, she joined tennis superstar Billie Jean King in establishing the Women’s Sports Foundation and served as the organization’s first president.

“When I first competed in the Olympics, no one would have considered the idea of an event like the Aurora Games as there were so many obstacles that we were facing. But through the hard work of so many people we have arrived at a watershed moment for women in and out of sports. The Aurora Games has the potential to become a real game changer for women’s sports and I am excited to play a role in its creation,” said de Varona.

Individual tickets will go on sale to the general public beginning Friday, March 8, 2019 to coincide with International Women’s Day. Daily tickets will range in price from $25 to $150 with full-series tickets available at a discount. Tickets will be available through Ticketmaster. Group sales and VIP Experiences can be reserved immediately by calling Alyssa Shane at (201) 926-8078.