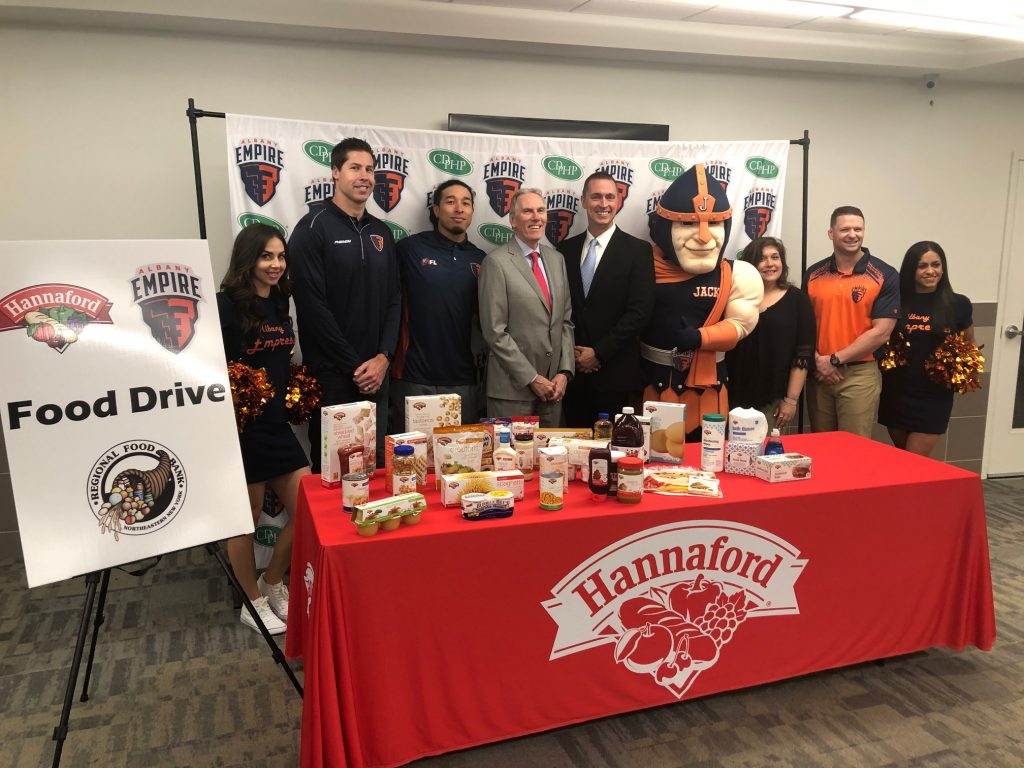 ALBANY, NEW YORK– The Albany Empire and Hannaford Supermarkets will partner to host a food drive on Saturday, June 1 during the Empire’s 3:30 p.m. home game at the Times Union Center against the Washington Valor.  All donations towards the food drive will benefit the Regional Food Bank of Northeastern New York.

Any fan who brings three or more non-perishable food items to the Hannaford table on the concourse at this Empire game will be granted two ticket vouchers good for any of the Empire’s remaining 2019 regular season home games.  Hannaford’s table will be located outside of sections 104-105 on the main concourse of the Times Union Center and will be available immediately after doors open.  Limit two ticket vouchers per fan.  Ticket vouchers must be redeemed at the Times Union Center box office prior to the Empire home game chosen by the fan.

“Hannaford is committed to fighting hunger and we are pleased to partner with the Albany Empire on this important initiative.  We hope our efforts will help the Food Bank provide for families well into the summer season,” said Hannaford Supermarkets Community Relations Specialist, Brian Fabre.  “We encourage fans to join us for an afternoon of great arena football action while supporting an organization vital to the health of our community.”

“The Albany Empire are proud to partner with Hannaford Supermarkets and benefit the Regional Food Bank of Northeastern New York,” said George Manias, C.O.O. of the Albany Empire.  “We strive to give back to the community that supports us so well and to help those in need.  As we entrench ourselves deeper in this community, we are always looking for ways that our coaches, players, and staff can get involved and this partnership made all the sense in the world to us.”

Fans can secure season tickets for the Albany Empire by calling 518-533-2200, by going to TheAlbanyEmpire.com, or by stopping by the Empire office located in the Times Union Center.  A limited number of great seats are still available!  Want to bring your organization to a game, fundraise, or perform on the field? Group experiences are now on sale.  Call 518-533-2200 for additional information.

Season memberships for the 2019 season are on sale now. For tickets, contact the Albany Empire sales department at (518) 533-2200 or by going to TheAlbanyEmpire.com. Follow the team on Facebook at facebook.com/TheAlbanyEmpire and Twitter at twitter.com/Albany_Empire.

About the Arena Football League

The Arena Football League enters its 32nd season in 2019. Since its inception in 1987, the AFL showcases a fast-paced, exciting game to millions of fans in a myriad of markets. With the addition of two new teams in Atlantic City, N.J., and Columbus, O.H., the League totals six teams for 2019: Albany, Atlantic City, Baltimore, Columbus, Philadelphia and Washington D.C. Each team will play 12 regular-season games in 2019. One can find the League can on Instagram, Twitter and Facebook using the handle @OfficialAFL.

Albany’s Times Union Center, formerly Pepsi Arena, continues to have great success. Renamed in January 2007, the Times Union Center is “Upstate New York’s Premier Sports and Entertainment Facility. Owned by Albany County and operated by SMG, the world’s largest private management firm for public assembly facilities, the Times Union Center has an adaptable seating capacity between 6,000 and 17,500. Since Frank Sinatra christened the building on January 30, 1990, more than seven million patrons have walked through the turnstiles. As a multi-purpose facility, the Times Union Center has hosted a variety of events, including concerts, family shows and sporting events, averaging 165 events each year.

Established in 1984, CDPHP is a physician-founded, member-focused and community-based not-for-profit health plan that offers high-quality affordable health insurance plans to members in 26 counties throughout New York. CDPHP is also on Facebook, Twitter, LinkedIn, Pinterest, and Instagram.

Founded in 1988 and headquartered in Schenectady, New York, Transfinder is a national leader in intelligent transportation systems, providing transportation management systems and services to school districts, municipalities and adult care facilities. Transfinder, an Inc. magazine “fastest-growing company” for the past eleven straight years, has offices in Austin, Texas, and Shanghai, China. The software company develops and supports routing and scheduling solutions for optimal transportation logistics. http://transfinder.com